The guest on the show Rajat sharma is seen sitting inside a witness box and then introduces Kapil. Kapil welcomes and asks him what will happen today on the show. Rajat Sharma says that he will put Kapil as a witness and make some charges/accusation which Kapil needs to answer and makes it as an Aap ki Adalat with theme – Comedy with Kapil. He makes Sidhu as the judge for this aap ki adalat mukadma (case).

Rajat ji goes on and pulls the leg of Kapil by citing how his english is bad and the same was proven in Kapil’s episode with Shah Rukh Khan (SRK).

Raju the servant comes and welcomes Rajat sharma….Raju makes a charge on Kapil and says that as he doesn’t get pay therefore he doesn’t pay taxes. Rajat ji proposes to switch their roles thus making Kapil as the servant and Raju as the boss for one day. This scene created a laughter.

Daadi comes in with a bang and she enjoys her time with Rajat ji. Daadi is seen inside the witness box and questioned by Rajat ji. He gives the details on how much she has consumed alcohol on the show from the time it has started, Daadi becomes amused to know it. After that, Rajat ji gives her two choices – either she can do the shagun (trademark kiss) or get a alcohol bottle which is inside their home. Daadi chooses the latter and goes away from there to fetch the alcohol bottle and doesn’t gives her Shagun ki Pappi to Rajat ji.

The audience asks questions to Rajat ji:
– You have asked so many questions on your show to lot of people ? Who did better acting in answering : actor or politicians ?
Rajat Ji: Politicians act well when they come on the show. And the actors don’t act much and give honest answers..

Sidhu gives his judgement at the end of the show and tells that Kapil’s punishment is that he will live thousands of years and will make India happy..The show seems to be hilarious and witty and ends on a very happy note with Rang de Basanti movie title song being played. Watch Comedy Nights with Kapil at 10 PM IST tonight with Rajat ji as the guest who seems to have a good time and it may be also true that we are seeing him on a comedy show for the first time. 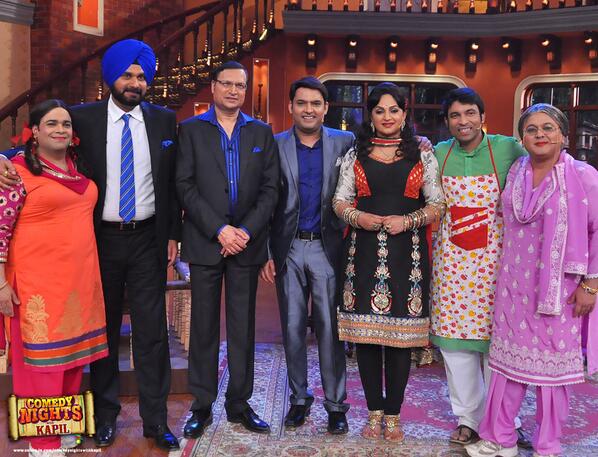