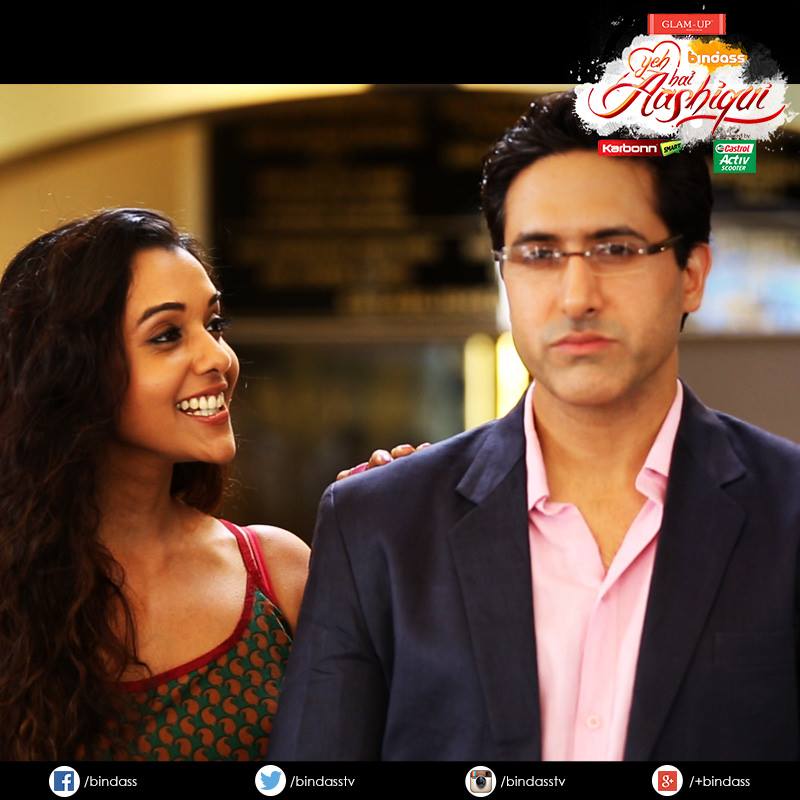 Rithvik Dhanjani (the host) starts the show and speaks that we plan so many things in life but life has a different funda. We don’t know anything about it. Today’s story is about two people who have never thought of love in their life and neither gave a serious thought but destiny thought otherwise and they fell in true love..

The story starts with a man (Prof. Aseem Sen) travelling in a taxi in Delhi for going to a college and is seen informing the taxi driver about him coming to the city after 8 years. He then remembers his wife asking him for a divorce. He then sees and eyes a beautiful girl in the college campus and smiles..

Rhea speaks with her friend about elections and how people are taking holidays in this crucial time. Her friends speak that a new professor Dr. Aseem Sen have joined them in their college and he is also US-returned. She then takes out a book and tells her liking to Eklavya an author of her favorite novel. A male friend of Rhea comes in and says that he got all the info about the professor and discloses that the professor used to beat his wife and because of it he had moved to US before. After hearing this, Rhea becomes furious and bunks the class. The professor introduces himself as Dr. Aseem Sen to her and other students.

Rithwik (the host): Rhea made up his mind to stay from Aseem sen and therefore didn’t took his course..

Next day in library, she again wants to read Eklavya’s novel and at that moment Aseem comes in and informs her about the exact page number of the content that she was trying to find. Her friends becomes impressed with the Prof. but she is not impressed. Sooner, her friend Trisha comes in crying and then she thinks that the prof has done something bad to her..

Without knowing the truth about Trisha, Rhea puts placards on college notice board with notes highlighting the past alleged abuse of Prof. Aseem sen. People sees the note about him and everybody asks him to give an answer. He says that the notes are correct and says that he doesn’t want to stay with students anymore. Rhea becomes happy on doing this. Aseem’s top boss – Prof Sinha comes in and tells him that he will not accept his resignation, and he tells him to disclose that he is not guilty. Prof Sinha accepts his responsibility and also admits the guilt of his daughter who was married to him. He wants to issue an official statement to inform all the students that he was falsely implicated in domestic abuse by his daughter. He asks him for how long will he run, he responds that he will leave after the grace period. Rhea listens the conversation between Aseem and Sinha. Aseem comes to know that Rhea listened to his conversation and then calls her to his cabin. Rhea complains that it is Prof. Sinha’s daughter fault and why did he kept quiet when she was falsely implicating and accusing him. He tells that Prof. Sinha has broken relationship with his daughter after her false implication. He tells her a good man is a man only, everybody makes mistake, and we are not God. No father can see his daughter going to jail. That’s why he didn’t disclose about Prof. Sinha and wants her to not disclose this to anybody. He wants her to understand his experience as a lesson.

She then sees Aseem’s book and then finds out that Aseem sir is actually Eklavya – her favorite author. She then realizes that she insulted her hero in front of everyone. She apologizes to him while speaking to herself and promises to not leave his side. She writes down in her social blog about a good friend – domestic abuse has destroyed his life but he followed his responsibilities, duty and also returned allegiance. How can we find these people nowadays ? She starts to develop good feelings for Aseem.. Her friends read Rhea’s blog and asks Rhea is this true about prof. Aseem sen. She responds that a man that sacrificed his life for somebody else’s reputation how he can come forward and defend himself.. Is that possible ? She tells her friend to decide themselves.. The song is played.. Aaanko Aankho ne pehle kuch din galti ki….Yuhi chalte baatein. Yehi Dua.. Tere liye.baheke giya…Yuhi chalta rahe Kafila..Rhea is happy now and speaks with her father and shares her happiness. Aseem sees her in happy mood.. She informs Delhi Samay – a newspaper and gives a scoop revealing the identity of the writer – Eklavya as Aseem Sen.

After that, Aseeem gets media attention. Aseem speaks with Rhea why she is doing this and becomes angry with her. He tells that his personal life is now in open.. Rhea cries and becomes low and tells that she did it because he is her Hero and what she did earlier for him was wrong and she just wanted that he gets recognition.. He tells that nobody made him happy since long time and hence his reaction was a bit rude initially. She suggests him to give a happy ending in his next novel and also give her the first manuscript. He says fine and comments that she is a good girl and wants her to be like this always and not change.. the song is played..chal ke khusbhu juda.. kahe tu..koi noor.Titli song.. She begins to come close to him and imagines spending time together in a park..

In the evening, she requests him to drop her home as it is late. He agrees to drop her and leave in the car. She speaks – I love you sir while sitting in the car. She confesses her love to him.. He asks about her PG hostel. She tells that he might be thinking as her crush but argues that it’s not like that and its actually she has the feeling of love and it is only true.. He tells that first she is her student, second -there is a big age gap between them and on top of that he is a divorcee. She speaks how the divorcee and love are connected.. She again reiterates her love for him and tells that she never told to anybody and the most important thing is that she loves him. He doesn’t give an answer, she insists him to give a reply. They come close to kiss and then he backs off.. She returns back the key and while going out from the car kisses him and happily goes to her PG accommodation. She thinks that he might love her but he seems amused.

Next day, her friends inform her that Aseem sir has resigned. She becomes anxious on hearing that and runs to find him. But doesn’t find him in office. Aseem at home remember her confession of love and his own words speaking about him being a divorcee. He remembers last night’s incident with Rhea while driving the car and in the process hits a tree on the road and gets injured. Rhea comes to see him and there he confesses his love to her.. He tells that he was just living alone and now wants to live with her. He only gave her mobile no to hospital so she only comes to see him. He then confesses his love with three special words – I love you.. He joins the college and both are seen happy. She comes to him and talks about going on a movie date so that they can spend nice time together.. Bann Ke Titli song is played..While they were about to kiss, a girl sees their moment of kissing. All the college students begin to demonstrate and protest against Aseem sen as they are unhappy to see a relationship blossoming between a prof and a student. She becomes unhappy and cries as the reputation of Aseem sen is now under threat..

Rhea’s parents comes to talk with top management of the college as other teachers have spoken against Prof. Aseem sen. Rhea in front of everybody confesses her love for Aseem and tells that it was not forced. She goes on to say that she only first proposed to Aseem and confessed love for him. Her father wants her to be quiet. Aseem takes the responsibility on his shoulders and says that it is his mistake of forgetting that she is her student. The management informs him that he is fired as the board has taken that decision.

When he is about to leave, she hugs him and says that why he again didn’t stand up to accept his love. He says that they need to wait and wants her to study and stand up on her own shoulders so that later people will understand her and acknowledge their relationship. He tells her that this is just the start and they need to wait for their love. He then speaks with Rhea’s father and says that he will wait until he (the father) is confident of their love. He re-assures Rhea and hugs.. with song played..jisme majal tokle le..Ha bawari yeh aashiqui. gustakh si.. bebaakh bhi..and they share some close moments. He presents a gift which is a manuscript of the novel – named Happy Ending just for her..

Rithvik says that Aseem and Rhea decided to wait because they were confident in their love and not for any guilt. Love happens without knowing us, it just happens. many people find love very late (at the end of their life) and some people get love too early. If you get your true love then do not leave it since it has the best feeling. Rithvik signs off by saying, until next time guys, Keep falling in love..

A guest couple speaks – the man is a psychology lecturer, and the girl was her student. They share their story of love and how their parents have not accepted their relationship because of the age gap. But, they decided to continue to be in a relationship and hopes that their parents will understand one day.