The promo shows Kapil starting the show by welcoming all and then talks with Siddhu on his locality’s annual function which will take place today. And the winner will get 11,000 INR and then taunts that there are only old men in his locality so their chance of winning is small.

Lala and Chaddha comes in and Bittu wants Lala to recharge for 30 INR mobile and then take money collectively later. Lala responds that Biitu and his family collectively go to bathroom when they are asked money by people to whom they owe the money. Chaddha says that Bittu’s family is not allowed in the annual function as after seeing his family past actions the neighbours have decided to boycott them. Bittu says that the main reason for not inviting them amounts to the fact that they won all the games last year.

Lala says he is strong and then falls down on Chaddha (invoking laughter). Lala says that even Palak is with them on their quest to win and warns Bittu that if he loses then he needs to leave the neighbour hood while they will win the prize of 11,000 INR. After that, Lala and Chaddha leaves.

Daadi comes in a bang wearing a spiderman’s costume – Spider Daadi. After then, Vivek comes on the stage running. Kapil welcomes Vivek. Bittu says that the spiderman sticks to wall but Daadi sticks to people and in order to take her away from men it takes 90 mins. Daadi tells that she will do the needful and approaches Vivek and then dances on the song – Yeh Hai Mumbai.. She then gives Vivek her trademark kiss (Shagun ki Pappi) and goes away.

Vivek then calls Raju in Amitabh Bachchan Style and tells him to bring water in baritone voice. Raju then comes in and informs Vivek that he was always a fan of a Villain and he wants Vivek to teach how to act like a Villain. Vivek then teaches him the acting of Villain. He wants Raju to feel very strong with eyes showing revenge for which Bittu responds that Raju is showing an expression of diarrhoea. Raju starts to act with facial expression. Bittu then compares his face to the socks of actor Raza Murad. He wants Raju to forget about his work and act like a villain of a Spiderman movie. Vivek tells him to speak the dialogue and Raju enacts – HI Darling, I will take you on a romantic date, we will have think crust Pizza with little little olives and chop-chop capsicum, you will love it (Raju makes fun in calling thin crust pizza, olives and capsicum). Raju then leaves from there.

Palak comes in with Lala and Chaddha. Bua is also there with Bittu. Palak wants to start the competition and says they will have a Kabbadi. Bittu responds that before playing Kabbadi first check your chaddi (inner wear) invoking a laughter. They play Kabbadi with Palak first starting and captures Mrs. Sharma brother. Palak then challenges Bittu and speaks with emotions which is actually a trap to capture them and hence to win the competition. Lala and Chaddha speaks that they will not get the prize of 11,000 INR as they always cheat the neighbour hood and hence need to compensate this time around.

Vivek has just finished dubbing in Hindi for Jamie Fox in the movie Amazing Spiderman 2. Stay tuned to Comedy Nights with Kapil on Colors, Sat-Sun at 10 PM IST. 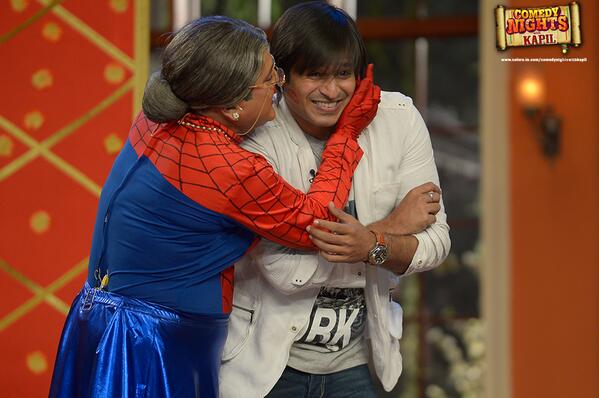