After Arjun and Duryodhan got Krishna’s individual and Dwarka’s narayan army support respectively, Krishna and Balaram present Duryodhan their army. During their conversation in-front of the army, Krishna informs Duryodhan that deception will play an important role in the killing of Bhishma, Drona, and Karna. Krishna also says that in case of Dharm (justice), deception can be used and also declares that he will perform deception. Krishna also reiterates that eventually Pandavas will win the war against Kauravas.

Shakuni seems annoyed on hearing Krishna’s open declaration to perform deception but can’t do much. Krishna challenges Shakuni to find out the solutions to protect Bhishma, Drona and Karna from deception.

Meanwhile, in Virat’s kingdom, Draupadi and Pandavas decide on the start date of the Kurukshetra war with Kauravas. Yudhistir takes the responsibility of sending the declaration letter to Kauravas and then informs Karna by throwing a relay in Karna’s fort. Karna reads the letter and comes to know about the date set by Pandavas.

At the other end in Hastinapur, Dhritrashtra is nervous on Duryodhan’s plan of engaging in a war with Pandavas. Dhritrashtra informs Duryodhan about Krishna’s support to Pandavas and cites some examples of Krishna’s might even in power-less situation like – Killing of King Kanz of Mathura, ability to destroy the environment without army’s support. At this point, Maha mantri – Vidur comes in and adds more on Krishna’s miracles at a very young age of 6 months. After hearing both Dhritrashtra’s and Vidur’s comments on Krishna, Duryodhan laughs on them and when Bhishma intervenes to tell the same, then he responds that they all have fear.

He speaks on Draupadi and how she was born from fire and compares her to a demon as she is not born in a normal way. Dhritrashtra again wants to contemplate on the war, at that same moment Karna comes in the assembly and informs them they have already received the declaration of war from Pandavas. Karna says that confidence is the key component for winning against Pandavas. He tells that Pandavas in their letter have stated the start date of war and also gave Kauravas’ option of war or surrender. Duryodhan informs that to surrender is impossible. He also becomes furious after reading the declaration letter and tears it apart. After this, Dhritrashtra decides to seek an opinion from astrologer – Jaimini both on choosing the right date to start the war and also on the fate of the war. 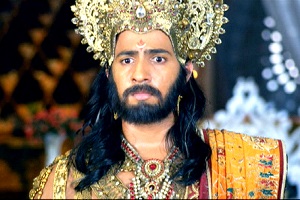 At the doorstep of Virat’s Kingdom, Krishna speaks with Abhimanyu on his responsibilities and duties in the war and names him the army’s hero and also a deputy to the commander of the army (whoever he may be). When Krishna asks him about the fear of war ? Abhimanyu replies that he is not afraid to die as he thinks of only victory. Krishna then talks on the Yug Parivartan (change in the world) and terms Bhishma’s death as the end of first war, and Abhimanyu’s participation as the start of the second war. In Virat’s kingdom, Draupadi and princess Uttara are excited on Abhimanyu’s arrival. Draupadi is very happy to see her son – Abhimanyu and 5 more children who will be also coming from Indraprastha. She will be seeing all of them for the first time. When Virat’s queen Sudeshna informs her that Abhimanyu is Subhadra’s son and not her own then Draupadi responds that in Pandavas’ clan sacrifice and dharm flows in their blood thus she expects Abhimanyu will treat her in the same way as her other 5 children.

Some of the questions arising are – What kind of answer will Dhritrashtra gets from the astrologer Jaimini and what will he do after that ? Will Shakuni really plan some strategies to counter deception from Krishna and thus protecting Bhishma, Drona, and Karna ? What will Arjun will do in the inevitable Kurukshetra war, whether he will fight with his bow against Bhishma and his teacher Drona ? How Abhimanyu will treat Draupadi in Virat’s kingdom ? What lesson would Queen Sudeshna learn from Abimanyu and Pandavas ? Will Uttara’s appreciation for Abhimanyu leads to her marriage with him ? How would Draupadi reacts after seeing her 5 sons (kings) coming from Indraprastha ? Stay tuned to Mahabharat @ 8:30 PM IST on Star Plus for this intriguing development.