The story is about Trupti and she speaks about her attempt to suicide four years ago because she scored 49 % marks in her 10th Class board exams. Like other students, she had pressure and she couldn’t handle it. During that results night when she attempted to suicide it was difficult for her. But soon, she was approaching to face another nightmare of a harassment incident.

Theme of the Episode: Fight Sexual Harassment; Don’t bother with other’s expectation, Be Happy to meet your own expectations; Fight to be a True Hero always !

The story begins with Trupti and her family speaking with her teacher Mrs. Gupta who suggests that Trupti needs some therapy as she was just recovering from her suicide attempt. Mrs. Gupta wants her to visit a therapist Mr. Qureshi which she knows well but her parents think that their daughter is fine. Her teacher then suggests that let’s leave it to Trupti to decide if she wants to visit therapy classes. Later, as Trupti comes out from her medical visit, her friend asks on her condition, and she goes away from there without answering. She visits Dr. Qureshi along with her father who drops her at the clinic. Dr Qureshi is a therapist doctor. She begins a discussion with the doctor and at first, he wants her to write the name of the people whom she likes on a card and terms it as an exercise. She utters about her brother Tej, mother (mamma) and says that’s it. The doctor asks her whether she doesn’t love her father. He goes on to say that he wants to help her and they need to talk.

She explains to the doctor about her dislike for her father and says that it started when her brother went to United Kingdom for studies and her father used to beat whenever she gets less marks. After received 49 % in her 10th board exams, she thought that her father will beat her. Hence, decided to take her own life. Dr. Qureshi says that she is beautiful and also suggests that the whole life is in front of her and then touches her hand. During the next visit to Dr. Qureshi, he says that they will do a exercise Word-Association test. He says that we will start with simple words and starts with Cat and she replies –> dog, Home –> Family, Brother –> Tej (her brother), Sex –> … . She becomes stunned and when asks more, she replies Sex –> Marriage, and then the doctor says that as she relates sex to marriage then that means she is a virgin. Trupti starts to become uncomfortable and asks him how does that question relates to the therapy. Before she leaves, he touches her and wants her to be more honest the next time.

She goes home and at night have a video chat with her brother Tej (who was working in UK). When he asked about their parents, she asks what does he think? She says its sure that her parents after their son’s birth didn’t thought more about her. She says that her brother has been a topper in school, college and now works in UK with a good job and compares to her condition – failures. He then asks about her therapy sessions, and asks Is everything ok ? She says its fine and excuses him to go for a dinner. Next morning, she visits the therapy clinic again and Dr. Qureshi there informs that they will do a psychological test which is called ‘Rorschach test’. He shows her some image and asks her what does she saw there ? She says cloud. He then comes close and touches her and shows another image. She says that two trees and he responds that in that photo there is a girl and a boy meeting alone and then says that according to him by sex people can get over severe trauma. At this point, Trupti is very much uncomfortable with him as he is very close to her. He then touches her face and she becomes annoyed and wants to leave. As begins to leave from there, he stops her and holds her hands. He reminds that he is a respected psychiatrist and she is a mentally disturbed girl who just few months ago attempted a suicide. He asks her, people will believe whom ? She then pushes him and runs from his room.

Trupti informs her father and he responds that he never believed in sending her to therapy and blames her for wishing to go for therapy lessons. He then wishes to not listen about it from now on. Trupti becomes surprised and asks her father whether he will not take any action against the doctor Dr. Qureshi and even a single word. As her father didn’t listen to her plea, she goes on to inform her brother Tej about the harassment incident via video chat. After learning from Trupti, he leaves UK for India and reaches their home giving much surprise to her mother as he came without any prior notice. Tej hugs her sister at home and he informs her father he came back after learning about Trupti’s situation. His father speaks that there was no need for him to come from UK as the matter was small. Tej replies that the matter was big and says that Trupti is still a child. He then wants to speak with Trupti alone, and asks his parents for leave. Trupti informs him more.

Next day, She meets a friend – Kavya and also apologize to her for not answering earlier. Kavya replies that she doesn’t need to apologize and then Trupti asks her for a help. Kavya and Tej goes to meet Dr. Qureshi and Taj acts like Kavya’s older brother Karan. Tej informs to Dr. Qureshi that her sister Kavya recently had a break-up with her boyfriend because of which she is really depressed and also she has tried to take her own life a week ago. He speaks that the doctor will take care of her in this hard time. Dr. Qureshi nods his head and says sure he will help. After Tej leaves, Kavya smiles and attends a session with her. Tej informs his sister Trupti that Kavya joined therapy lessons with the doctor and their plan is on track. After a while, Trupti speaks that six weeks have passed and Dr. Qureshi has never tried any inappropriate action against Kavya. She contemplates that her plan to trap and expose the doctor’s wrong is going to fail. Sooner, she receives a SMS from Kavya informing that Dr. Qureshi is trapped. Trupti goes with her brother to meet the doctor and also shows him the Video on a phone that they receive from Kavya which shows his guilt [of doing the same with Kavya as he did with Trupti]. Trupti wants him to go far away from her and says that she didn’t came to negotiate. She says that if he didn’t listen then she will present that video to the police. Trupti then slaps him hard bringing much disgrace to Dr. Qureshi. 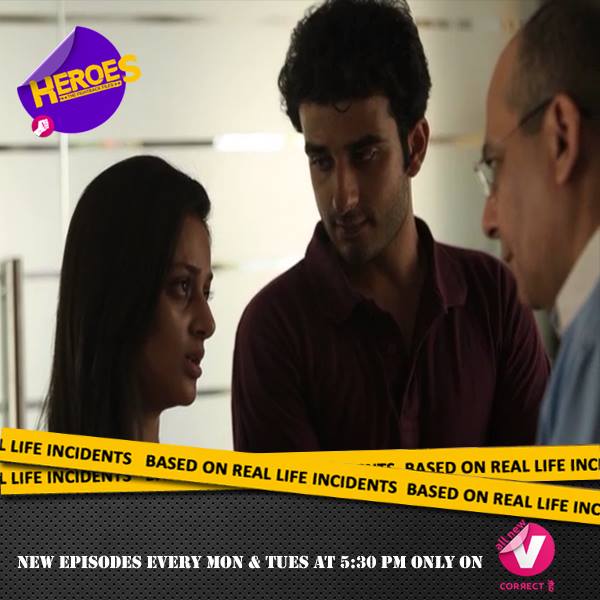 After that day. she never heard about Dr. Qureshi again and she re-joined her school. Her dad also apologize for all the wrongs he did and vowed to not beat her again. She then realized that she should not be affected by other people’s expectations. What matters is her own expectation and the pressure went away. She speaks that her harasser wanted to take undue advantage of her frail situation. But, she fought and thinks herself as a true hero.

Next Episode: Rajkummar Rao [actor, winner of National Award 2013, critically acclaimed movies – Talaash, Kai Po Che!, Shahid, Queen) becomes the host guest for the next episode and speaks about whether you differentiate between a male and female child in your home under any circumstances. The promo shows a young girl being asked whether she has stepped outside her home without veil.
– Read more about Rajkummar on his Wikipedia page.

Additional Info:
– Rorschach test also known as the Rorschach inkblot test, the Rorschach technique, or simply the inkblot test is a psychological test in which subjects’ perceptions of inkblots are recorded and then analyzed using psychological interpretation, complex algorithms, or both.
–> Some psychologists use this test to examine a person’s personality characteristics and emotional functioning. Named after its creator, Swiss psychologist Hermann Rorschach. Read more on its Wikipedia page.

– Word Association is a common word game involving an exchange of words that are associated together. Word association is a noun phrase, meaning “stimulation of an associative pattern by a word or “the connection and production of other words in response to a given word, done spontaneously as a game, creative technique, or in a psychiatric evaluation”. Read more on its Wikipedia page.