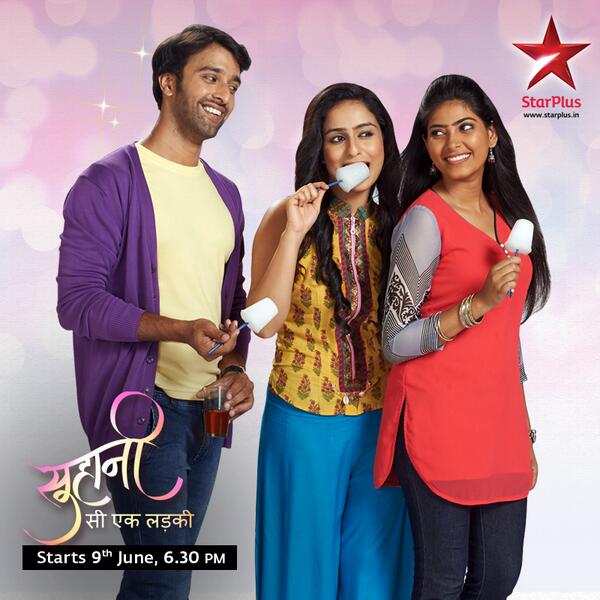 The story of Suhani Si Ek Ladki (A girl who is delightful/pleasant) is about three individuals – Suhani, Soumya and Yuvraaj. Soumya is Suhani’s friend and her philosophy is that love happens at the spur of the moment and everything else is not useful. Yuvraj is a rich guy as it is evident from his high-class red Car with red color steering wheel and his philosophy is love happens after seeing a beautiful face, thus he believes in external beauty.

Suhani is an ordinary and down-to earth girl and her philosophy suggests that love happens because of internal beauty and with a person who has good heart, She says that there are thousands of people who fall for beauty but she thinks otherwise. Thus, three different individuals have different definitions of love, so what would be their equation ? Their love story is intertwined with different set of emotions – internal vs. external beauty, richness and modesty, spur of moment and pampered love, friendship, and togetherness. The tagline of the show is – Can love change the equation of friendship? This new show replaces Ek Ghar Banaunga. Stay tuned to this new show starting from 9th June, 2014 on Star Plus @ 6:30 PM and runs from Monday to Saturday.

* Neha and Sahil were students of veteran director Subhash Ghai’s Acting School which is Whistling Woods – Film, Television and media arts Institute. Read more about the institute at its Wikipedia page.

Actors of the show speaks about their roles.
[youtube id=http://www.youtube.com/playlist?list=PL4b3KxwBzb857W38aPXXKBKAwe-6zql9L]