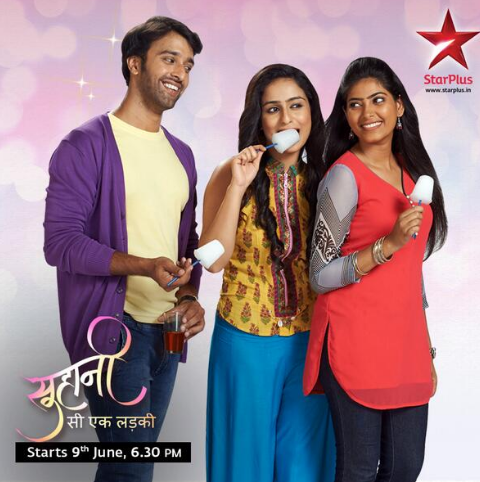 Initially, when Ek Ghar Banaunga was called off, Akash and Poonam’s fans were disappointed knowing the simple and righteous show is being pulled off air. But no regrets, if you get a better deal. Suhani Si Ek Ladki has taken the 6.30 PM slot on Star plus, and just two days old show is already making waves with his characters and plots. The main female lead of the show Suhani is a dark complexioned, middle class, not so beautiful externally but glorified at heart, simple, helping, down to earth and the girl next door type of girl. Whereas the other female lead Soumya is rich, gorgeous, fun loving and finds best company in Suhani. They are friends for life and share a good rapport. Soumya tries to find happiness being with Suhani as her parents have given her only money and no love.

Soumya feels lonely at home and sticks to Suhani all the time. Suhani loves Soumya and cares for her a lot. Soumya and Suhani go to a beauty parlour where they unknowingly have a tiff with Rags(Ragini, Yuvraaj’s Bhabhi). Rags is beautiful with killer looks and believes Yuvraaj is right on his terms to value true beauty. Rags loses her hair because of Suhani and gets angry thinking to settle the scores when she meets her again. Suhani takes Soumya to an old age home where they sing and dance just to make an old lady happy who has been missing her son on her marriage anniversary. Suhani cares for everyone around her and has a golden heart. The ladies wish a prince comes to marry Suhani and blesses her.

Coming to the male lead, Yuvraaj, he is rich, handsome, arrogant, beauty lover and flamboyant. He is helpful too which shows his heart also has goodness. He sees a fire getting on at the petrol pump and jumps from his car to blow it off before any major mishap happens. Soumya and Suhani witness this daring act. Suhani’s dupatta flies in the air and falls on his face. He sees Soumya and thinks its her dupatta. He keeps it safe with him. He organizes a beauty contest to select Miss Allahabad, but is annoyed seeing bad faces on the stage. He asks them to see their faces in the mirror and ask themselves do they deserve to be here and win this title.

A girl gets angry getting insulted by him and taunts Yuvraaj saying as you have made of fun today, the fate will make fun of you one day. Yuvraaj does not care of her words. His mum Pratima is simple and not so good looking. She understands what Yuvraaj is doing is totally wrong, he values only beauty and nothing else, which can be a problem for him in future. Later on, Yuvaarj instantly becomes Soumya’s fan seeing her drop dead looks. On the other hand, he does not seem interested in Suhani seeing her plain Jane looks. Suhani comes in between Yuvraaj and Soumya all the time, which irritates him.

Yuvraaj wants to know more about Soumya, and coming to know she is rich and from a respectable family, he seems to get interested in her. All the three become great friends and their love story starts. Will Yuvraaj eventually fall in love with Soumya, or will it be Suhani? Keep reading to know more on this interesting love triangle show.

Actors of the show speaks about their roles.
[youtube id=http://www.youtube.com/playlist?list=PL4b3KxwBzb857W38aPXXKBKAwe-6zql9L]