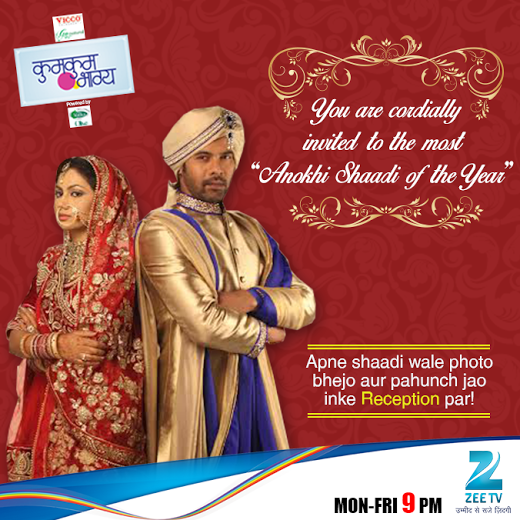 After the mangalsutra ceremony, Abhi and Pragya takes the Saath Phere (seven circumambulations) in front of the Pious fire and then Abhi applies Sindoor on Pragya’s forehead thereby realizing the marriage. Abhi still holds a bit unhappy look towards Alia during his Saat Phere. Sarla is happy to see Pragya’s marriage and even Bulbul and Purvi gets quite a good amount of money from Abhi in return for his shoes which is also one of the ritual. During the Bidayi moment, Pragya hugs all, Sarla and Bulbul cries [Dulhan Aansoo Bahaye.. Behana Ro Ro Rulaye.. Jaana Hain Chodka Bulbul ka Des Re. song plays].

Pragya leaves in teary eyes from her mother’s home and Sarla wants Abhi to take care of her daughter. Abhi speaks to himself that Pragya is very shrewd and he will never take care of her. Pragya goes in the car and she even sees Suresh who wishes her while carrying a glum look. Pragya enters Abhi’s home while putting down the rice bowl (Kalash) with her left foot to complete the Ghar Pravesh (Griha Pravesh) ritual for the newly wed bride. Abhi’s Daadi is bit annoyed since Tannu also appears there with the bride and bride-groom. After the Ghar Pravesh, she remembers the times when she first came to Abhi’s home to break Aakash marriage. Another time when Abhi rescued her from drowning in waters as she had fell down [Abhi on that occasion speaks with her whole holding her and those dialogues were given to him by the crew of the commercial Ad he was shooting, he thought pragya to be actress of the Ad at that time]. Many other moments were – their chance meeting in the jewellery shop; Abhi’s support to Pragya calling her loyal during her engagement ceremony and told to his friends, the Mangalsutra ceremony, Saath phere, and finally the Sindoor. [Allah Wariya song plays in background]…

Instead of going with Pragya in their room, Abhi goes away with his friends though Daadi tried to influence him in not going. Bulbul misses Pragya and that was the first day both sisters are far apart and not staying together. Nimrit (Nimmi) – Aakash’s sister speaks candidly with Pragya. Sooner then, Pragya reminisces about the words that she spoke with Bulbul about leading a simple marriage, small home and family and even a small room with her bridegroom, and suggests that in big rooms feelings are lost and in small room even the heartbeats of the couple are heard as well. She speaks of them as they are practical. She also gets reminded of her marriage moments and Bidayi moments.

Pragya was sitting in her room on the bed for the Suhaag raat night but Abhi went away with his friends. It has to be seen whether he went to meet Tannu which should have been the case [or some other person, the chances are bleak]. It is seen that Pragya goes out in an auto from her home with a pensive and worried look to find Abhi. She reaches a place and inquires about Abhi from his driver who informs her that Abhi is present in Flat no 1803. This event might be the first test for Pragya since Abhi continues to think that she married him because of her greed for money and vowed to never take care of her. How would Pragya handles Abhi’s displeasure on the first wedding night ? Will she continues to hold patience with Abhi’s attitude arising from his misunderstanding about her ?

There are so many confusions and misunderstanding in Abhi’s mind which will be clear only by Purab, the foremost being Abhi and Alia mistakenly think Pragya to be Purab’s love interest, and second that Pragya has decided to marry Abhi for greed and has dumped Purab. One thing is clear from these confusions is Purab will emerge winner and will take home Bulbul while Alia’s dreams of marrying Purab will be shattered for the time being, since there would be more twists and turns that will unfold as the story progresses further. Stay tuned to Kumkum Bhagya @ 9 PM on Zee TV. 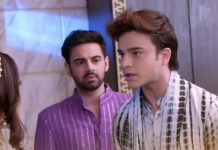