Siddhu starts the show and welcomes all and speaks a witty line – Mohabbat Ke Bena Koi Jawaani Jawaani Nahi Rahti..Lahro Ki Bena Sagar mein Koi ravangi nahi hoti..Woh Bura Hi Sahi, Adharm Hi Sahi Lekin Ek Villain Ke Bina Koi kahani Kahani nahi rahti.. Kapil comes as Sittu (with long hairs) and speaks to Siddhu that he is only one villain and not two. He goes on to say that he is number 1 in wrong stuff and when people comes he runs away. moreover, police is afraid of him since if they slap him once he will get fits the next moment, so they avoid hitting him. 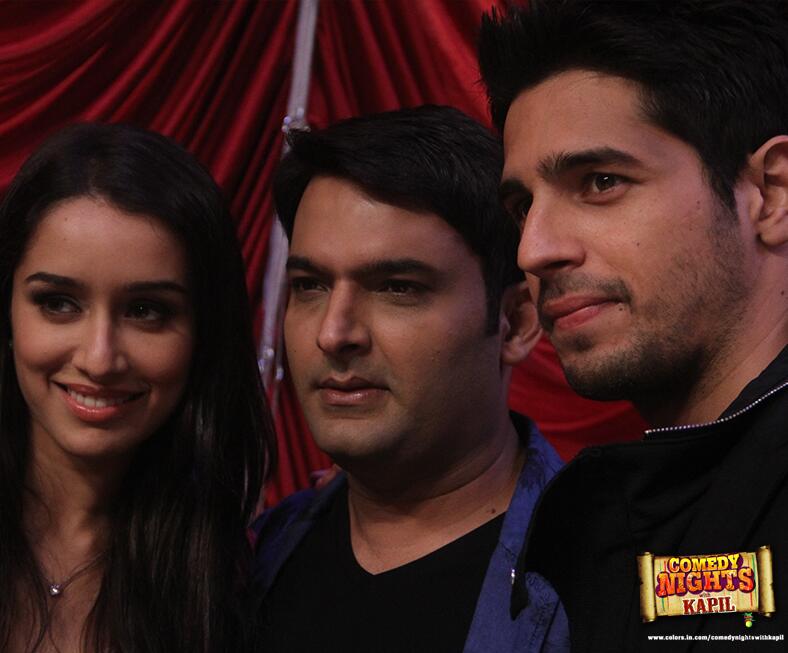 Sittu then wants to welcome Ek Villain and sooner the team of Ek Villain movie – Shraddha Kapoor, Siddharth Malhotra and Riteish Deshmukh comes on stage on the song – Teri Galiyan from their movie. He welcomes them and speaks these are known people to the audience. He introduces himself as Sittu (Bittu’s brother), and further says that the only difference is in the first alphabet he starts with ‘S’ and Bittu with ‘B’ and the common thing is ‘Ittu’ and moves the knife to and fro a bit so as to indirectly bring some fear in Riteish’s mind. Shraddha wants Sittu to teach her how to become a villain. Sittu passes a taunt on her and says that at her home there is already a University but still she wants to take a tuition from outside (referring to her father Shakti Kapoor).

Sooner then, Sittu enacts a scene where he himself becomes a hero, Shraddha will be his heroine, Siddharth being the villain, and Riteish to act as heroine’s mother. The scene will start with hero and heroine coming close and the villain at his end feels jealous on seeing them, and the mother is at home. Sittu holds her hand and speaks that he want to say something and then wants to have the same eyeliner like her bringing smiles on everybody’s faces. He speaks that after using eyeliner, eyes looks big, and then wants to asks for her hand from her mother, and then thinks to ask for the whole body. Sittu wants Siddharth the villain to feel more jealous and he goes to meet Shraddha’s mother. Riteish the mother declines to give the hand of her daughter to a villain. Sittu responds that he is not a villain and its a part time job and his main business is to tease girls. He also suggests to help her in other daily stuffs and the mother asks him whether he is interested to marry her. Sittu thinks of her as a clever mother. 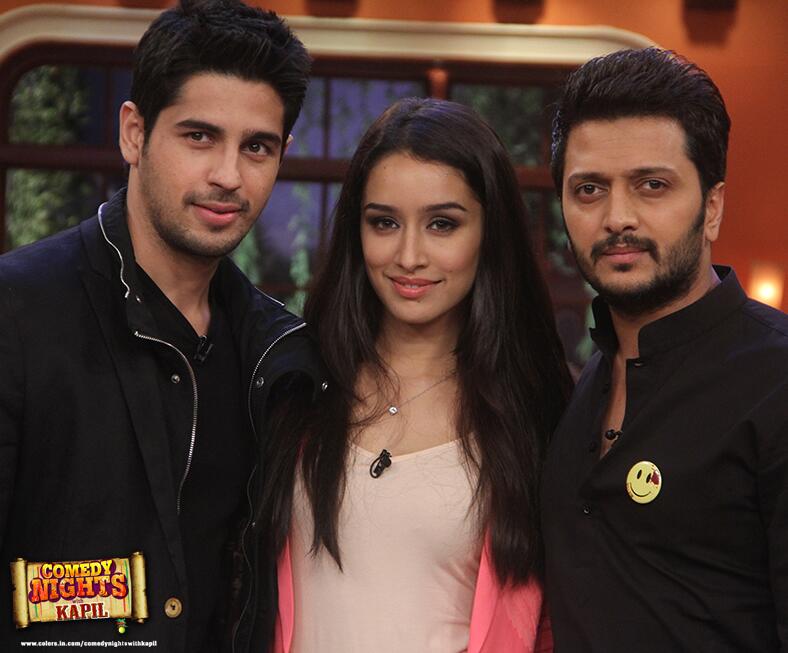 Sittu hears a siren and wants to run away and then runs from there. Daadi comes with a red beacon in her hand while creating the siren sound by herself. Daadi meets them and calls for Bittu. Sittu is gone and Kapil comes now as Bittu and sings the song Tum Hi Ho from Aashiqui 2 and comes close to Shraddha. Daadi at her end comes very close to Riteish, and Bittu takes her away from him.. After a while, Ramu comes on the stage who was earlier a servant at Bittu’s home but now is a rich man after his visit to Dubai. Ramu speaks that people there are waiting for him but Bittu is not convinced and makes a taunt at him that just before he was born his parents didn’t wait for him and instead went to watch a movie. Ramu feels a bit embarassed. Ramu then wants to make a film with Mohit Suri as the director, and Mohit agrees, but Bittu wants him to sell Pakodas at the market..Ramu speaks that the hero will be Siddharth Bhai and the song will be sung by Shraddha, and now only needs a villain to complete the cast and crew.

Bittu advises to Ramu that he himself can become the villain, he answers that he cannot become a villain since the people might think because his movie is not good so he became the villain. He wants to take an audition and then invites people who comes with a small set-up where the judges will take the auditions, and it is named as Villain Dikhhla Jaa (spoof on Jhalak Dikhlaa Jaa). Ramu says that the auditions need to be taken on an extravagant scale since he is Ramu Seth (Boss). Sid, Mohit, Riteish and Shraddha becomes judges, and the first participant for the audition is Laccha who comes dressed as an old man with a stick, spectacles and Hooka in his hand. 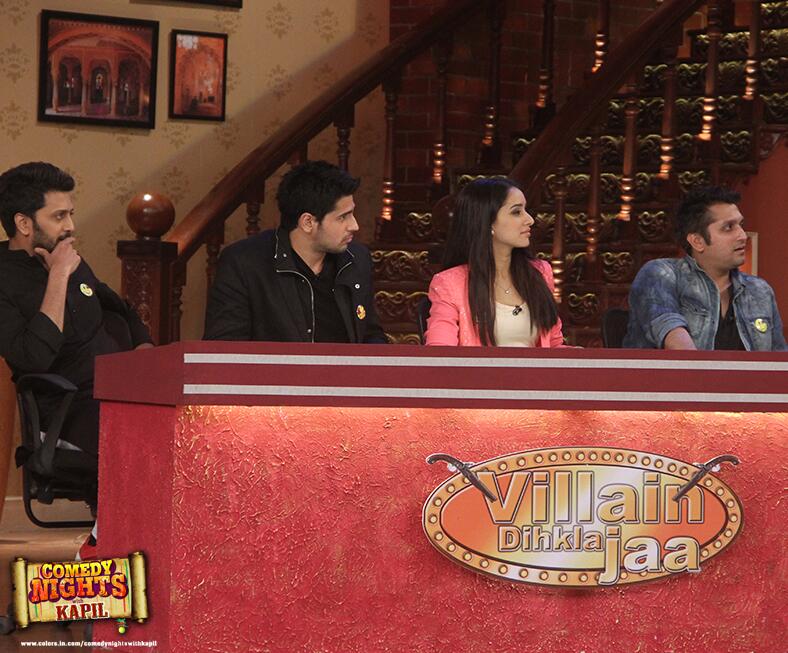 Bittu then gives a scene to Laccha where heroine is dancing, and the hero will come and hit him. Riteish becomes the heroine and dances sensually and Laccha follows him while Shraddha sings the song Teri Galiyan there, and the hero comes there and beats Laccha. Shraddha also sings the Teri Galiyan song with finesse and elegance after agreeing to the request of her girl fan. Kapil signs off by saying keep smiling, be happy, keep watching his show. Kapil greets all the guests and Riteish even kisses Daadi and the show ends on that hilarious and happy note. Stay tuned to CNWK tonight @ 10 PM on Colors. 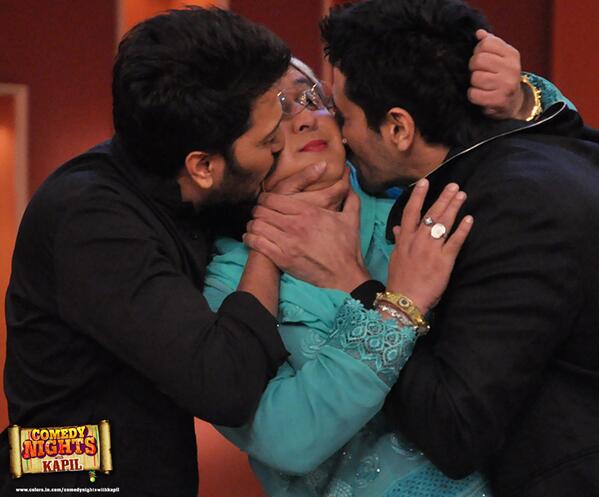