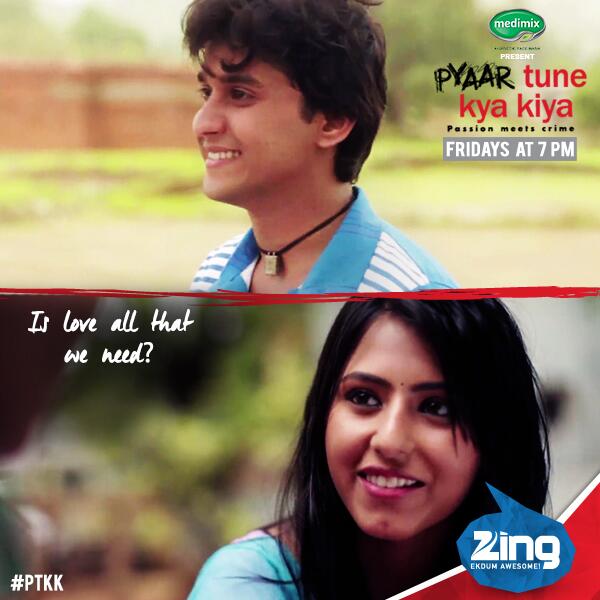 The story is about two youngsters – Shivani and Shankar who are having a big class divide between them (rich vs. poor) and it is set in rural part of Bihar. Shankar has feelings for Shivani and one occasion at the railway crossing looks at her with affection and feels some shy as well. Shivani is seen sitting in the rickshaw at that time. [Takte rehte – Tere Mast Mast Do Nain song plays].

Shankar is advised by his friend that if he hesitates in talking then both train and Shivani will go away. He continues to follow her and she reciprocates the same feelings in her eyes. Shivani at home thinks of him and remembers the time Shankar helped her by pushing the rickshaw. [Chori Kiya Re Jiya song plays]. Sooner, she writes a letter expressing her feelings for Shankar, and Shankar at his end writes similar letter. He gives his letter to her in a booklet. Some time later, Shankar comes to Shivani’s home and her father speaks that he is the son of Dulari – a petty worker and compliments his good studies and then adds sarcasm by suggesting how come his mother has big dreams. Shivani’s father makes a taunt that Shankar wants to become a collector and is supported by his son who speaks that how come a Gobar handlers can dream such thing.

Some other day, Shankar’s friend asks him what does he write in the letters which he gives to Shivani, whether he writes I love you in it ? Shankar replies he is not mad to write such thing. Shivani’s father comes to know of Shankar’s love interest for his daughter, and then Shankar is being thrashed badly by her brother and his men. Shivani begs his father to leave Shankar but seems in vain. Shivani’s father vows to teach a tough lesson to Shankar the next day at the panchayat in his village and also speaks how shankar has dared to think of a Thakur’s daughter.

Will Shankar be facing humiliation and threat to his life from Shivani’s father ? How would Shivani be able to protect her love ? Will the class boundary (rich and poor) creates a wall between Shivani and Shankar’s unspoken love ? What will be the end result of their love story in an unfriendly atmosphere for love ? Stay tuned to Pyaar Tune Kya Kiya (PTKK) this Friday on Zing TV @ 7 PM.

Info On Cast
* Shankar is played by actor Meghan Jadhav
– Born on 7th June, 1992 in Mumbai.
– Played the role of Krishna in Jai Shri Krishna On Colors TV.
– Role of Gyan in Saas Bina Sasuraal (2010-2012)
– Younger brother of Mandar Jadhav who is well known for popular TV show Aladdin

* Shivani is played by actress Richa Mukherjee
– Richa is seen in Mahabharat on Star Plus, playing the role of Princess Uttara, Abhimanyu’s wife and Prince Uttar’s sister.
– Richa’s Twitter page.

Additional Note:
– Tere Mast Mast Do Nain and Chori Kiya Re Jiya songs are from the movie Dabangg (2010).