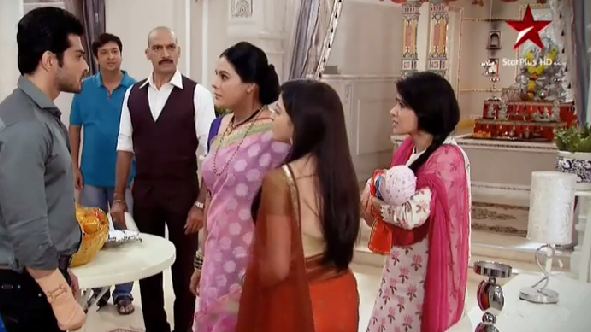 Jyoti is going now on Astha’s advice, that if we need to see the change, first we need to take a step in bringing the change. Astha asks her to be strong as mountain, so that no win can move her. She asks her to be adamant on her decision of not going with Abhay, and then Niranjan and Shlok won’t be able to send her by force. Niranjan plans to send Jyoti with Abhay, and talks to Shlok, as he is convinced that Abhay has really changed, as he refused to marry a rich NRI and said he loves only Jyoti. Shlok does not know Niranjan informed Abhay about his plan and they both have fooled him. Shlok takes Astha with him to office, so that she does not stop Jyoti from going. Astha asks him what’s the work here, that he brought her so urgently, she is worried for Jyoti and Anaya, as they need her now. She understands that Shlok wants to keep her away from home, and maybe Niranjan is upto something. She runs home thinking Abhay might have come there.

Jyoti calls a lawyer and asks him to make her divorce papers. He comes home with the documents and she checks them. Niranjan comes and asks whats all this going on. He sees the documents and is shocked to see divorce notice for Abhay. He asks Jyoti and Anjali what are they doing. While Anjali was clueless about this, she wants to support Jyoti by her heart and give her a happy life with Siddharth. Niranjan fumes on Jyoti and asks her to go with Abhay. Jyoti shouts on him shocking him by her raised tone and tells him she will not go back with Abhay. She wants to get free from him, and hence this divorce will happen. Niranjan is about to slap her. He calls Abhay and asks him to take Jyoti from his house right away. Abhay follows his instructions happily and comes to take Jyoti. Jyoti tells him she won’t go with him, but Abhay holds her hand and drags her outside. Jyoti shouts Astha for her help and feels very helpless as Astha is not at home and she thinks Anjali is doing all this. Jyoti feels why is Niranjan not supporting her this time, as she regarded him the best father of the world.

Anjali feels Jyoti’s pain never ending and raises her voice finally against the cruelty of Abhay and Niranjan. She makes Abhay leave Jyoti’s hand and pushes him away from her, scolding him to be in his limit and tells him that Jyoti will not go with him. Jyoti is shocked seeing Anjali supporting her for the first time. Vinayak Kaka is also present and smiles seeing Anjali finally speaking up for her daughter. The most shocked person is Niranjan, who can’t believe his wife can dare to go against his decision. Astha comes on right time and supports Anjali and Jyoti. The women get united and stand against Abahy asking him to dare to touch Jyoti now. Will this daring act of Anjali for justice, shake up Niranjan’s ego and make him take any worse step? Will Jyoti understand Anjali’s true love and concern for her? Will Shlok change his opinion for Anjali seeing her take a stand for Jyoti? Keep reading.