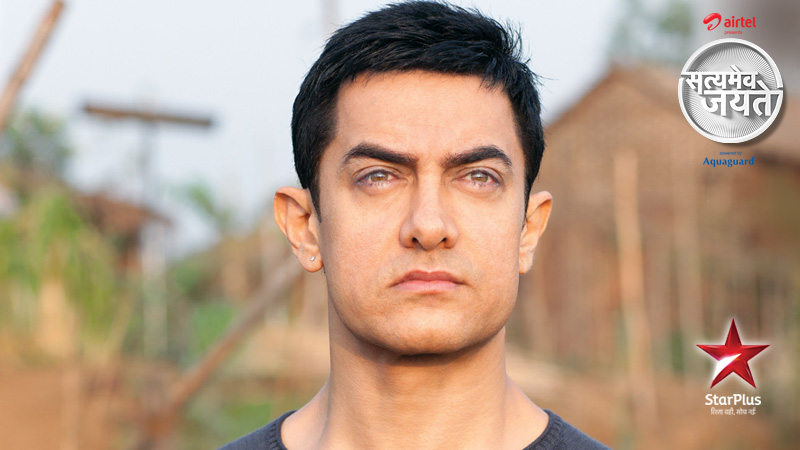 Satyamev Jayate Season 3 preparations have already started and the show will begin on 21st September (Sunday) and aired simultaneously on Doordarshan National and Star Plus @ 11:00 am. Megastar Aamir Khan will be again leading the show and the format of the show will have celebrities* (Bollywood Actresses, Actors – Amitabh Bachchan, Salman Khan, Deepika Padukone, Kangana Ranaut, Parineeti Chopra, and others) guest who will support/championing the cause that will be shown on the show. Until now, promotions are on with Mumkin Hai message to highlight the positive impact in the society because of Satyamev Jayate’s previous seasons.

In Season 2 of Satyamev Jayate telecast in March 2014 this year, there were 5 Episodes – Fighting Rape, Police Reforms, Don’t Waste your Garbage, Kings Every Day, and Criminalization of Politics.. More details on the concept of Season 3 and issues are yet not disclosed and the full-fledged promotions and telecast date is still not known. We wrote below the current Mumkin Hai Promos and then provide some Twitter Q&A activity by Satyamev Jayate and some details.

State of Change: Satyamev Jayate (SJ) show started with female foeticide issue.  Aamir in that show spoke that Girls in India will get all the rights in life like that of Boys. In that episode, miracle stick was mentioned (Jaadu ki Chadhi) and that is the People (You) and I (individual). After SJ episode, in Maharashtra, the miracle stick has showed its impact and in 2011 the sex-ratio with boys: 1000 and girls 894 which has now rose to 1000 to 940. A couple speak of getting inspired by the show and the women gave a birth to the girl and she is very happy to have her and everyone in the family loves the baby girl. Aamir speaks that Chiraiya (little bird) came back again to the yard.. Mumkin Hai.

Fighting back Non-Violently: Shanti who is now works as a cab driver speaks that on watching the satyamev Jayate’s episode on Domestic violence at home with women suffering and at the receiving end. She speaks of listening to the women who spoke with Aamir on that episode and relates to her own life since she also suffered domestic violence for 10-12 years. After seeing the show, she got courage and strength and vowed that she will not suffer herself and also will not let others suffer with this kind of abuse. She fought and finally she is free from that abuse and suffering. She has a identity as a cab driver for Sakha cabs service, Delhi and now knows the path of her future. Aamir speaks that Shanti will reach her goals by herself and everyone can do as well. Mumkin Hai

Helping alcoholics, one day at a time: Aamir speaks that there are many things in life from which you can enjoy and relish but importantly first you need a life. The voiceover suggests that addiction of Alcohol has destroyed many lives. A guest speaking for the show informs that when he used to drink a lot he was out of his mind and used to abuse his wife by beating and the wife also informs the same. He speaks on wondering how to come out of this illness of severe alcohol addiction. In the episode of Satyamev Jayate – Alcohol Abuse – Think before you drink,  solution was shown how to get de-addicted from alcoholism. That solution was ‘Alcholics Anonymous’ – an organization which helps alcoholics to combat their addiction and so as to bring complete change and realize de-addiction. The show presented the organization details during the telecast and the guest man speaks of watching the show and that day has changed his life and now he finds his current passage of life and nights to be more relaxed and happier than those nights with alcohol addiction. After the telecast of Episode, Alcoholics Anonymous helpline received 3.5 Lakh (0.35 million) Phone Calls from all over India and there is no other campaign of alcohol de-addiction which is bigger than this one in the world. Aamir speaks that Alcoholics Anonymous and their lakhs of members showed that the change can happen.. Mumkin Hai

Child Safety and Women Empowerment: Once in Bhopal, a young girl was found wandering and seems to be lost and is seen by 18-year old girl Nazia. Nazia speaks that the girl’s face has some marks of injury and some teeth were broken too. Nazia speaks that the girl told her that parents has beaten her and also her uncle has tried to abuse and attempted to rape her. She speaks of seeing Satyamev Jayate’s episode – Child Sexual Abuse which enlightened about Child safety and a CHILDLINE organization was shown on the show which provides help to children and is known by the identity of the phone no: 1098. Nazia went to Childline office and the staff there after listening to her filed a FIR against the girl’s parents and uncle and as of now court hearings are going on in that case. SJ’s show on Child exploitation has resulted in 40 Lakhs (4 million) children calling the Childline service for help and today this is the biggest helpline for children who are having problems and even Nazia has joined the Childline organization as a volunteer. Nazia aims to become an IPS officer to prove that she is not just a girl but I am a  Girl. Aamir speaks that Nazia will one day become a good IPS officer.. Mumkin Hai

* According to DNA article, Satyamev Jayate will begin on 21st September (Sunday), and will have six episodes in total – 2 in September and the remaining 4 in October.
* Doordarshan National also confirmed on its Twitter page that the show will air on it every Sunday @ 11:00 AM starting from 21st September

.@DamselinDreams Yes, we believe it is. One has to believe in oneself. The others have to help her heal and get justice. #MumkinHai

.@Naaz_jaihind Both yes & no. It is extremely variable. What one can certainly say is that there is an enhanced awareness #MumkinHai

* Fighting Rape, At the hospital
http://www.satyamevjayate.in/Fighting-Rape/EPISODE-1Article.aspx?uid=E1-Hospital-A3

* Satyamev Jayate Website to keep updated about the show and other promos and finer details
http://www.satyamevjayate.in/

* Guests on the show as reported in media: Faridoon Shahryar from Bollywood Hungama Tweeted about the actors which we listed above.