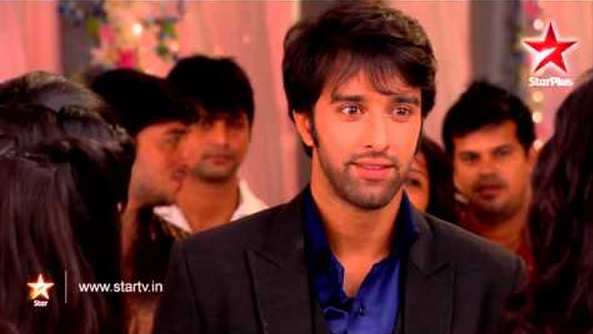 As Yuvraaj has come to know the truth that Suhani is innocently trapped in this marriage by Soumya and Pankaj, and she agreed to marry him as she really loves him. He has turned good towards her, and defending her infront of Dadi and bringing her fav samosas to end her fast. Suhani is glad seeing a good change in Yuvraaj. Soumya is facing lots of troubles in the form of Krishna’s sister Rakhi, who is creating a valley between Soumya and Krishna. Will she realize Rakhi wants to harm her marriage and protect her relation? Blind Krishna is unable to see Soumya’s pain infront of Rakhi’s smart traps. Things between Suhani and Dadi were also becoming fine, but thanks to Menka, she created some problems again and this time Suhani is tensed as she washes Dadi’s bedsheet and it gets torn. Suhani uses her wits to balance the matter shocking Menka again. Suhani has won Rags’ heart but a jealous Menka is filling Rags’ ears against Suhani.

Yuvraaj goes to café and Pankaj sees him with a girl. He gets angry thinking Yuvraaj is cheating on Suhani. He fumes on Yuvraaj for being disgusting even after being married. Yuvraaj tries to explain him the situation, but Pankaj does not hear anything. Pankaj threatens him to keep Suhani happy else he will cancle his bank loan, which can bring the Birla Family in roads. Yuvraaj gets irked by his constant pressurizing and threatening. Yuvraaj backfires on him and asks him to think anything and do whatever he wants, as he will do what he feels is right. Pankaj and Yuvraaj have an argument on wrong basis and this spoils Yuvraaj mood and his inclination towards Suhani. Will Yuvraaj and Suhani take their relation ahead?

Suhani’s sister Bhavna who married Amit, and came back to stay at her parents’ home, is facing a big problem in her in laws house, which she is hiding from everyone. Amit’s younger brother Rishi is eyeing Bhavna in bad sense and tries to get physical with her, though she understands his intentions and have left Amit’s home making excuse of her health issues. Amit is out of city for work and Rishi is taking to take its advantage. Rishi lands at Bhavna’s mum’s place and asks her to come alone as everyone misses her at his home. Bhavna says she will come later and sends him off. Rishi calls Amit and says mum is seriously ill and I can’t take care of her alone, and asks Amit to send Bhavna home. Amit gets worried and calls up Bhavna telling his mum is ill and asking her to go home immediately. Bhavna is tensed as she has to protect herself from Rishi’s evil intentions. Amit tells Bhavna that he will try to come for his mum’s sake and apply for a leave. Will Amit come on time and get to know Rishi’s truth? Keep reading.