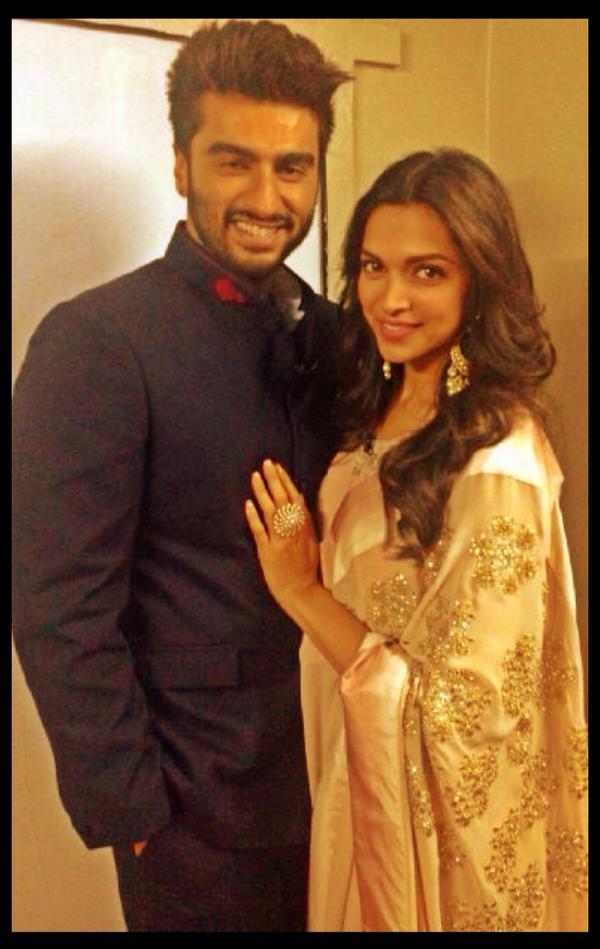 Guest on the show: Actors and Superstars – Deepika Padukone and Arjun Kapoor for the promotion of their movie Finding Fanny.

Kapil starts the show by singing Paani Da Rang Vekh Ke song (from the movie Vicky Donor)  and the environment has been set-up ideal for singing and he sings effortlessly. He welcomes all. Deepika comes on stage on the Fanny Re song. He speaks to her on being distracted when he sees her and doesn’t believe that she is there and wants a hug to get a proof bringing laughter. Deepika speaks of a better idea and does the Wifi kiss to him which he coined earlier.

Kapil calls Deepika as Deepu and speaks of taking the advantage since she came alone. She speaks of a special person and that is Arjun Kapoor her real hero. Arjun Kapoor comes on stage on the same Fanny Re song and Kapil greets him. Kapil then wants to sing a song  for Deepika and Arjun while they enact the scene. Kapil then sings the song Pyaar Vale Din Saare Oh Fanny Re… and soon Gutthi comes there while dressed in the character of Rosalina “Rosie” Eucharistica (played by Dimple Kapadia in Deepika’s movie Finding Fanny) and in red dress. She greets Deepika and Arjun and Kapil speaks that she doesn’t know her. She speaks of herself as a neighbor and is fanny since she has a fan on the head. Daadi comes there and calls herself as Fanny and suggests that Gutthi who has declared herself as Fanny is a liar. When Daadi comes on stage, Arjun greets her and she also bows down and makes a big fart. Daadi informs Gutthi aka Fanny 1 that it is not necessary that the skirts are broken always and sometimes performance is done by the stomach as well. Daadi reiterates that she is fanny and Gutthi calls herself as Fanny with a new saying – Fanny Fanny Returns of the Day so she is Fanny.

Kapil speaks of not knowing who is the real fanny and calls Deepika (Deepu) to know the answer. Deepika ponders and suggests that the real fanny will know few songs from Goa, Right ? Daadi and Gutthi both takes out their hand and then Gutthi starts first singing and sings her usual Gulshan Gulshan song and Kapil speaks that its Gutthi song and she replies that Gutthi is her inspiration and calls her as Diva and great which brings laughter and cheer from audience. Then comes the turn of Daadi and she sings the Chaar Botal Vodka.. Kaam Mera Rozka song and also shows her dance moves. Kapil speaks that this song is of Honey singh and she replies anyways the song is set in Goa. Kapil then wants Daadi and Gutthi (Fanny 1 and 2) to go from there otherwise they will get hit. Daadi and Gutthi goes from there.

Palak comes on stage and introduces herself and later Bittu enacts a scene with Palak and Arjun and making them as a couple and the scene is set at a market when palak goes with her husband for vegetable shopping. At the market, Palak asks a Vegetable vendor played by Bittu about having 12 Kgs of Gourd (Kaddu) and the vendor asks whether husband is fasting and she replies that her husband is a bit angry with her since she slept early last night @ 10 PM. Bittu then makes a taunt and Arjun both and says that Arjun who is a big actor has married Palak and he himself a vegetable vendor has married Deepika bringing laughter and smile on Deepika’s face.

Ramu comes there on stage and he speaks of coming there to meet Deepika. Sooner, Laccha comes there and informs Bittu of having 2 options. The first being that he wants the payment from Bittu for the entire milk of 11,000 litres which Bittu’s family drank and the second option is to give Deepika’s hand to him. Raju comes there and greets Arjun and Deepika. Raju is seen wearing a Rajasthani top as shown.  Raju then speaks of loving her after seeing her movie Ram-Leela. Deepika then wants to  decide by herself since she is the one who is getting married and then informs them that the one who runs fast from there and reaches the first place she will marry that person. All three – Ramu, Laccha and Raju runs fast and also Bittu. After they have gone out, Bittu closes the door. Kapil signs off by saying – Keep Smiling and watch his show on Colors. The show ends on a happy note with the Fanny Re song with Deepika singing a bit and greeting the audience.