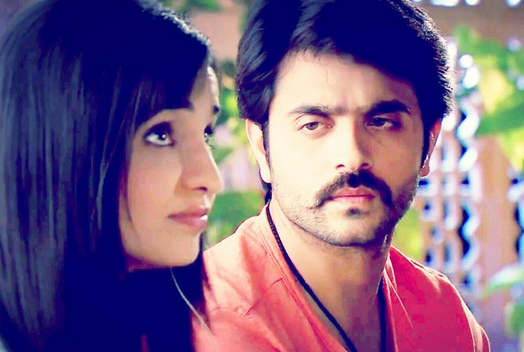 The sharp tongued Mohini has realizes all her mistakes and she goes to Rudra to apologize to him. She makes him confront his heart asking whether he loves Mayra or not. Rudra thinks that he has feelings for Mayra, but denies to her. When Mayra gets hurt and her head bleeds, its Rudra who cares for her and does the first aid, and Rohit being stupid to think its sindoor in her hairline. Mayra is at the point where she has choose between Rudra and Rohit. Mayra feels Rudra loves her a lot, but stops her heart. Rudra gets a dream of Paro coming to talk to him, and saying that their son needs a mother and Mayra will be best for him. She asks Rudra to accept Mayra and marry her, as she has seen love for her in his eyes. Rudra will be confused as Mayra is marrying Rohit and he does not want to come between them. Rudra hides his feelings, as he sees his Paro in Mayra and still wants to go far from the house, for Mayra’s happiness.

Rohit is unsure about Mayra’s feelings as she looks doubtful about their marriage. Mohini goes ahead to talk to Mayra and will ask her to not ruin her life by marrying someone she does not love. She asks her not to marry Rohit and confess her love to Rudra. Mohini will be seen pushing Mayra to follow her heart and do what will keep her happy for her lifetime. Just when their marriage is about to happen, Mayra tells Rohit that she does not love him, but Rudra, as she has realized her feelings.

By this time, Rudra has left the house and stands outside with Dhruv, giving his best wishes to Mayra. She runs out leaving her marriage to stop Rudra. She then confesses her feelings to Rudra, making his decision of loving her firm and clear. Rudra too tells her that he loves her and they have a romantic hug. Finally, Mayra got her Rangrasiya….. Everyone is happy for Rudra and Mayra. With all animosity gone, Dhruv has got a good mother and Rudra got a true life partner. With Ashish Sharma and Sanaya Irani’s show ending, we wish them all the best for their next projects and would like to see them back in new shows soon.