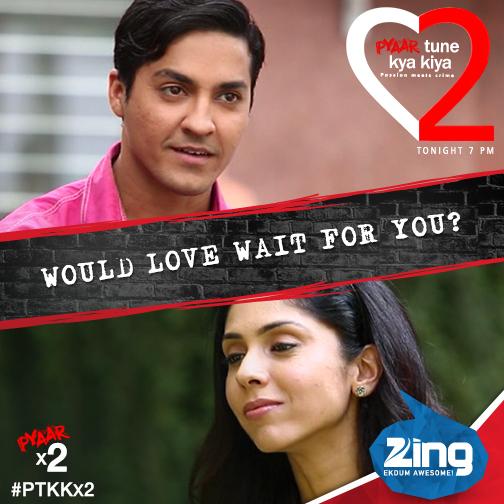 Meiyang Chang (the host) speaks about college life and how a boy wants to impress and woo a girl and if he succeeds then he can get love otherwise the girl can become his friend. He welcomes all and today’s story is about Saurabh from Ghaziabad and Alisha from Delhi and they were studying in a college in Delhi. Let’s see their story set in a college.

Saurabh is playing football in his college and does a free kick and by mistake the ball hits Alisha on her back. She makes a taunt and calls him Beckham’s brother. He speaks in broken english and she thinks he got a seat from Sports quota. She gives him the football and he tries to ask her mobile and home details but in vain. After some time, he goes to meet her and apologizes to her and she calls him uneducated and leaves. He writes a ‘I am SORY’ message for her and soon corrected by his friend. He keeps the note with the sorry message on her bike and she comes there and finds it and becomes somewhat puzzled and leaves. Next day, he meets her in the library and apologizes to her. She wants him to leave her and he speaks of apologizing since she is not forgiving him. She informs him of forgiving him and he wants friendship from her. After some thought, she agrees to befriend him and they go for some coffee. She asks about his dream and he speaks of getting further sports quota and pursue sports and says all in broken english again. She speaks of her wish to become a singer and he also informs of his desire to become a singer as well. He sings Main Hoon Na song and Alisha is not much impressed with him. She helps him in improving his english skills. [Tere Mast Do Nain song plays]. He plays football and watched by Alisha and her friend and doesn’t put focus on it and gets hit by football below his belt which brings laughter to her. Later, he meets his friend who advises him to propose to her after reaching her home and at next available opportunity.

Saurabh goes to meet Alisha while wearing a tie and soon meets her. She asks what is he doing there and thinks there is some reason. After becoming shy and some blushes, she asks what is the name of the girl ? He opens up and gives out a letter with I love you message directed at her. After seeing it, she becomes annoyed and asks what is such thing ? He wants her to become his girlfriend and she thinks he became mad. She makes clear that their bond is special and of friendship and thinks that by expressing about love he is damaging their bond. She informs that they can only be Just friends and there can’t be anything between them and leaves. He informs his friend about getting dejection from her and his friend suggests that if the girl agrees to be a friend then that means his love can progress. Saurabh’s friend advises him to go and propose to her on Valentine’s day and suggests that no girl will say no on that day.

Meiyang (the host) speaks that Saurabh was in much love with Alisha but she made it clear that she will only remain his friend. Saurabh’s friend was influencing him and he was getting more confidence.

Saurabh goes on the valentine day to propose to Alisha with a red rose but finds that she is spending some good time with a college boy who also plays guitar. He decides to not pursue his proposal and was about to leave. Alisha sees Saurabh and calls him and then introduces Rohit to him. He meets Rohit and she informs that Rohit is an amazing singer and they are planning for a band which will perform in every country. She wants Saurabh to work with their band and manage it. He accepts it. Later, they went to take some snacks and Rohit wants Saurabh to order and bring 2 coffees for them. He brings the coffee and finds Rohit teaching how to play guitar to Alisha. He asks how does she know Rohit ? She informs of knowing Rohit and calls him as her close friend. She praises Rohit since he is teaching her guitar and speaks of not having much interest in classical music. Rohit tries to demean Saurabh another time. Later in the evening, she drops Saurabh at his hostel and he invites her to his hostel room. After some hesitation, she agrees to come and drinks water. Just then, he goes on to kiss on her cheeks suddenly without her approval. She reacts by slapping him and reminds that he is only a friend and why he is not understanding ? She becomes more angry and thinks that he crossed limit another time and leaves. [Tum Mile to Jaane Kyun Doori Hogayi song plays].

Next day, Saurabh informs his friend about his action last night with Alisha. Saurabh’s friend suggested that he should be sober and should have done such thing after winning her confidence. At the cafeteria, Rohit makes taunt at Saurabh and wants him to introduce himself in English. Saurabh speaks in broken english – I play football, energy with full and Rohit wants him to focus on his studies and forget about love. He also wants Saurabh to not mingle in their group and cites that he is a simple and poor guy from a village. As Saurabh was leaving, Rohit makes fun of Saurabh’s english introduction and this incites Saurabh to retaliate by hitting a punch at Rohit. Alisha comes there and thinks that Saurabh is now gone to the level of violent behavior and fighting. He takes her aside and informs that he loves her and also wants to marry her. He suggests that Rohit’s behavior and talking is very bad. After hearing his proposal again, she slaps him and ends all relationship and calls him disgusting and leaves. Saurabh is dejected once again and at his home remembers his introduction and other moments with Alisha – good and bad ones. He writes down that Alisha has left far from his life and he has hope that she will come back in his life at one point since his love is true. [Ek Pal Yeh Hi Tera Mera song plays]. Saurabh finds Rohit and Alisha mingling more often. Alisha wants to pursue singing and informs the same to Rohit. He speaks of going to Mumbai and will also help her in getting music contracts. He then gives her the guitar and wants her to think that she became a star already. She accepts it and thanks him. Saurabh continues to remain dejected.

Meiyang (the host) speaks that all 3 of them were ending their diplomas and for one they were inching closer to dreams while for some dreams were broken. Alisha shifted to Mumbai with Rohit to pursue her singing career and dreams. While, Saurabh after becoming sad and dejected left to his hometown Ghaziabad.

Saurabh reaches his home in Ghaziabad and meets his father and informs on coming back to stay permanently. At his home, he continues to remember Alisha and their first moments. [Khoya Khoya Chand tha.. song plays]. He decides and goes on to attend Vision English speaking classes and gets 2/10 grade at the start. He becomes dejected on that score and soon befriends a girl in that coaching class. He improves on his english skills and get 50 % – 5/10. At Alisha’s end, Rohit is trying to be physical with her and she suggests that they need to focus on career and marriage and then such things can be done. He becomes annoyed and asks whether they are not in love and informs that even he is also struggling in his career. He asks what’s wrong if he has some fun with her. She becomes annoyed and locks herself in another room. Rohit becomes angry and leaves her while Alisha is crying. Saurabh’s improvement in english is getting bigger and he becomes excited to see his test’s score and shares his joy with a new friend – girl at his coaching class [Khoya Khoya Chand Tere Bina.. plays..].. Alisha prepares to leave from Rohit’s place in Mumbai and breaks the guitar which was gifted to her by him earlier. She goes back to Delhi and comes to meet Saurabh at the boy’s hostel. She learns that Saurabh went back to his hometown from his friend. She gets Saurabh’s details from him and soon reaches Saurabh’s home in Ghaziabad. Saurabh becomes surprised to see her and his father wants her to stay for that day since there are no transportation in the evening. She agrees to stay and finds that Saurabh speaking good english.

Saurabh brings tea/snacks for her and soon his friend from the coaching class – Rani comes with sweet delicacy – Kheer. Saurabh’s father informs that his son will be getting married with Rani next month and suggests that Rani is a good girl. Alisha becomes shocked to hear that news. Later, she wants to speak with Saurabh about Rani but he replies that they can speak next morning. Saurabh and Alisha speak next morning and she congratulates him on getting married. He speaks that they were destined to meet another time since it is a small world. She speaks of thinking that he will wait for her. He asks why she thought in that way and what’s the need to waste his life for her just by waiting. She takes out his diary which he has earlier left in his hostel so as to prove that she expected him to wait. She tries to speak that earlier she was in some other zone and was focusing on her career. He asks so what she is thinking now and suggests whether she can come or leave any time. Rani comes there and  he informs on finding a friend like Alisha which is Rani. He brings out the guitar which he wanted to give it to Alisha earlier but couldn’t be able to give her. He wants to present that guitar so as to rekindle their friendship again. He speaks that first love never dies but something dies with first love and gives her the guitar. On that note, Saurabh leaves with Rani making Alisha dejected. The story ends on that note.

Meiyang speaks that if we love someone then its not the case that they also love us as well and be together in leading a life. Saurabh groomed himself to match with society after reaching Ghaziabad. Alisha trusts Rohit a lot but his actions showed  his real life. By that time she realized her feelings for Saurabh and reached him it was too late. Rani entered in Saurabh’s life and she has provided able support to him and his father. Saurabh and Alisha remained friends with their lively spirit. Meiyang asks the viewers what would they have done if they were in place of Saurabh and Alisha  ? People can share their opinion using the hashtag #PTKK on Zing TV’s facebook and Twitter pages.