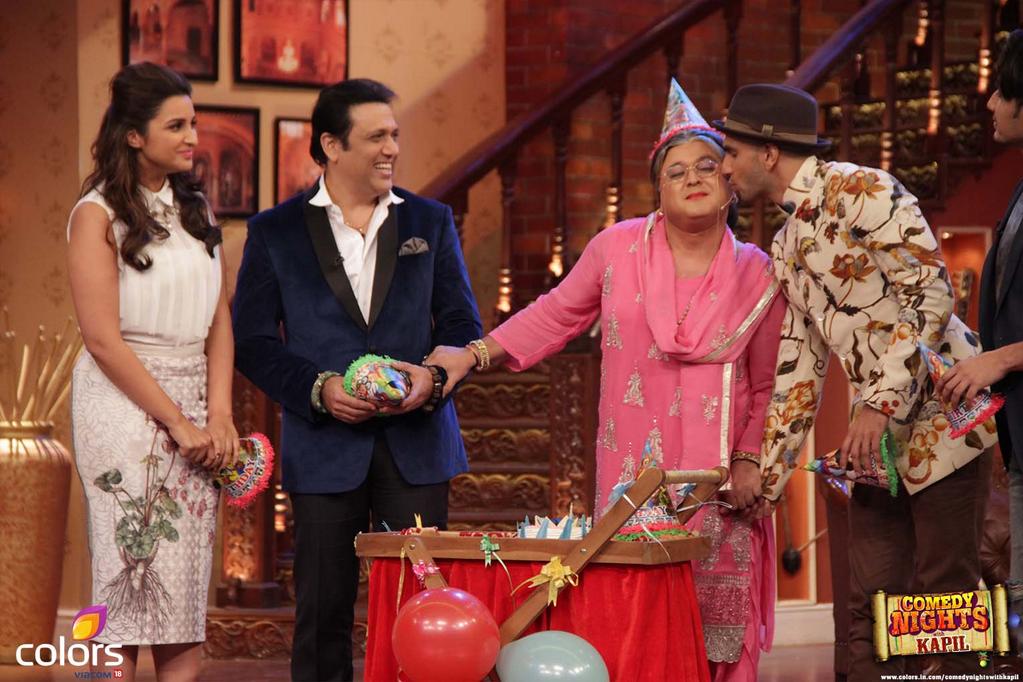 The show starts with Govinda starting the proceedings and comes on the stage on the Kill Dill movie title song. He speaks of coming there not as a hero but as a villain and speaks a fast dialogue which highlighted a aggressive character’s attitude.

Sittu’s banter, funny exchanges (Jugalbandi in Hindi) with Govinda:
Sittu aka Bittu’s Sharma brother makes an entry next and makes a quote which says doesn’t matter pants becomes inners or vice versa, he has chosen Govinda as his teacher. Govinda replies with a quote that he doesn’t have any interest in becoming Sittu’s teacher since he doesn’t want to lose his reputation. Sittu speaks funnily of only having fear in bathing in cold. Siddhu wants Sittu to flush the restroom after using it.

Ranveer Singh, Ali Zafar makes a rocking entry with Ranveer driving a rickshaw and soon they all dance on the Kill Dill (Kill/Dill) title song with Sittu as well. Parineeti comes on the stage and Sittu calls her Parineeti Chopdi instead of Chopra and thinks that Chopra is only for males and gives the example of Prem Chopra. Sittu makes another try at quote and funnily suggests that force will not be accepted in love as well during constipation. Sittu gets a call and leaves to come up as Kapil. Kapil welcomes Kill Dill movie team. He speaks that in Parineeti’s movies there are many kisses. Parineeti becomes embarrassed and covers her face but with a smile. Kapil then goes one more step on the lighter note and asks whether the makers put kisses in her movies. Parineeti replies of working in modern scripts since she is also modern and the movie title and theme demand such kisses. Kapil learns that Parineeti and Ali has taught Ranveer some music sargam (tune) and then Ranveer presents what he learnt and sings a song ‘Nakhriley’…from his movie. Kapil makes a remark that Ranveer sang badly with his sargam out of sync invoking a laughter.

Recreating the match made in heaven: Gutthi and Ranveer
Gutthi comes on stage with some hanging rope and caresses the goat and carries a big teddy bear. She calls the bear as Daddy bear and then suggests that her father used to hide his beers inside that teddy hence Daddy bear. Gutthi then speaks of not touching a boy until now and goes on to hold Ranveer’s hand. She wants to enact a scene with him and calls herself as Deepika and he will act like Ranveer. Gutthi wants to perform on Ang Lagade song which is a sensuous song in which Ranveer was shirtless. Ranveer takes off his suit since doesn’t want to leave things on imagination. He begins the scene and climbs the stairs and comes down slowly. Gutthi at her end is trying hard to call Ranveer and slowly removes her Dupatta and acts like throwing money. Ranveer acts like teary-eyed and then puts an imaginary Sindoor on Gutthi’s forehead while acting to show much emotions. Gutthi becomes very excited.

Parineeti and Ranveer will be at their best in giving Titanic movie pose. Ranveer and Ali will engage in a singing competition. Daadi will be trying to impress Parineeti with her funny and witty words and also will give her Shagun Ki Pappi (best wishes kisses) to the boys. Daadi is also seen getting a kiss from Ranveer. Bua will be shaking a leg and grooving with Parineeti. The Kill Dill episode on CNWK will be a fun and hilarious one. Stay tuned to Comedy Nights with Kapil on Colors TV.

Additional Notes:
* Kill Dil movie is about two killers – Dev played by Ranveer Singh and Tutu played by Ali Zafar. They are trained by Bhaiyaji portrayed by Govinda to be killers. Disha played by Parineeti Chopra is the love interest of Dev and falls in love with her. Bhaiyaji who is an antagonist doesn’t agree and accept for Dev-Disha relationship. Kill Dil’s Wikipedia page and is expected to release on 14th November 2014.