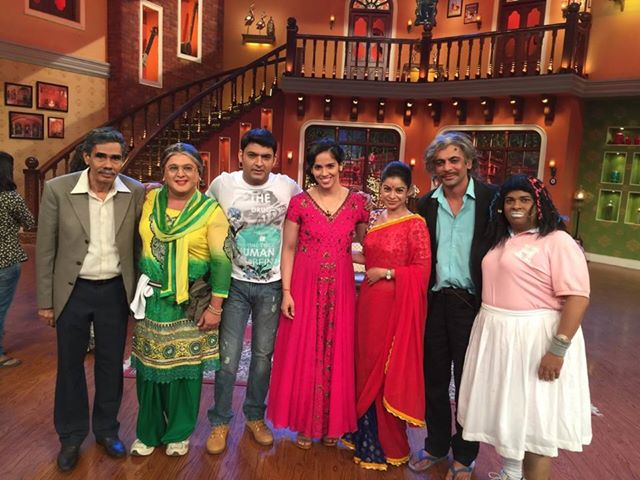 Daadi, Bua and Raju are playing badminton without any shuttle. Raju informs Daadi that she is caught but she replies of not getting out even during her drinking session as well. Bittu comes out and Bua informs that they are playing Badmilton. Bittu corrects the name of the sport. Kapil welcomes Saina Nehwal by speaking that she has make India proud all over the world. Saina comes on the stage on the Indiawaale song. Kapil welcomes her and informs that she is the first girl player to win an olympic medal for badminton. Kapil and Saina begin to have a chat and he asks why she doesn’t use to smile a lot ? She smiles on that question and then Kapil suggests that she can smile a lot on the show so as to fill her smile quota.

Kapil opens the floor to the audience and asks who can make Saina smile. A young boy from the audience starts to speak few puzzles – hand move from vertical and names it as Sauce and then bends it horizontally, and asks about its name. He reveals the answer to be Soya Sauce [Sleeping Sauce]. Kapil and Saina couldn’t get his puzzles. The next one is hand signal pushing forward and from Pan to Ja..pan. He makes another puzzle/joke on a friend taunting other friend. Mrs. Bittu Sharma comes on stage next calling Bittu’s name. She speaks of her wish of wanting to go to Sports since childhood. Bittu makes taunts on her and tries to pull her leg suggesting that she acts like child and even makes fun that she cannot buy jewellery. She informs of winning an olympic medal if she had opportunities and speaks of his father’s support. Bittu’s sasur comes on a small cart wheel and Bittu calls it as a four wheeler, a taunt. Bittu’s Sasur speaks of liking running and cites that with running can help you in stealing ornaments on a lighter note invoking laughter. Manju speaks that her brother learnt throwing spear (Bhala in hindi) from his father and Bittu makes a joke that he is so thin and cannot do it. Manju replies that her brother became fat since she gave him fish food. Bittu makes another taunt at his wife and suggests how can she got fishes for her brother since there are no ponds and only drainage ponds. He suggests that a Kekda (Crab) got hold of her when she went there. Saina is just smiling on Bittu’s taunt and Manju leaves.

Bittu’s Sasur speaks of playing Badminton with Saina and creates an artifical net with his small cart and with imaginary shuttle. He asks why to waste time by playing with a shuttle. Both Saina and Bittu’s sasur starts playing and he speaks of winning against her. Bittu will also try his hand in playing against Saina. Bittu’s one return shot makes the shuttle go in air higher and gets stuck on the top. On that note, Bittu asks whether he has defeated Saina and feels overjoyed. Palak will be dressed as a badminton player but with lots of make-up in black shade and will enact her antics and fun moments with Saina. Saina’s father was also present on the set.

Kapil signs off by saying that every house has a girl who mirrors Saina and the families need to encourage their daughters and wants the people to keep smiling and loving. The show ends on a happy note with Daadi, Palak, Bua joining in to dance with Saina a bit on the Indiawaale song. Stay tuned to Comedy Nights on Colors.

* Saumya Tandon played the role of tennis player girl in the sketch comedy with Bittu during the start in the Episode.
– She makes an entry as the tennis girl and asks Bittu about the direction of Andheri Sports Complex. Bittu speaks in funny english with her. She wishes to play tennis at many competitive levels and then will go for marriage. She speaks of having weak backhand in tennis and Kapil then holds his hand and calls them soft. Bittu tries to pull her leg and she doesn’t want to listen to him. Bittu learns that she has a boyfriend which makes him annoyed and she informs that her boyfriend is police commissioner and then he calls her as his smaller sister and becomes afraid.
– Saumya is an actor, model, host and has worked in Dance India Dance, Zor Ka Jhakta reality show with SRK, Comedy Circus.
– Saumya’s Wikipedia page and Twitter page. 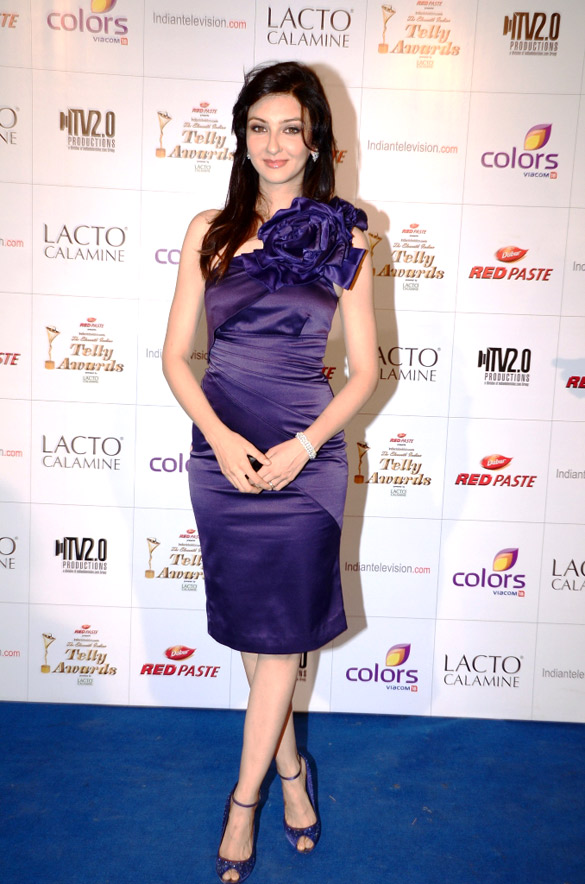 Images credit: Facebook page of Saina and Saumya’s pic from her Wikipedia page.