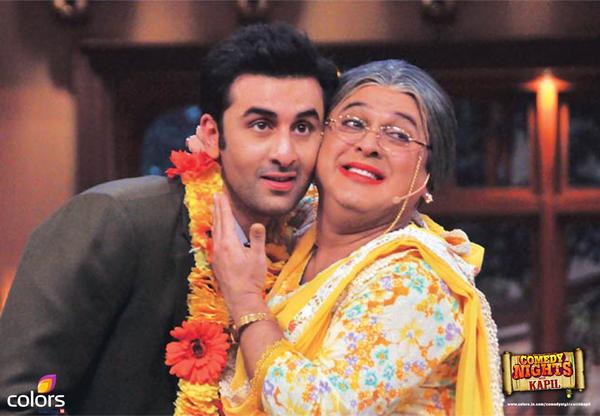 Kapil starts the show and speaks about a star who has applied his midas touch to a sport which is football which was earlier famous in Kolkata, Goa and other regions but now became famous all over India. He introduces Ranbir Kapoor as the versatile actor and Superstar and owner of Mumbai City Football club. He then welcomes Mumbai players Tiago Ribeiro from Switzerland and Syed Rahim Nabi (Captain) from India (Kolkata). Both players come with their team official song and with a football.

Kapil wants Ranbir to teach his team players some dance moves. Ranbir starts dancing with players on Balam Pichkari song from his movie Yeh Jawaani Hai Deewani (YJHD) and also greets Siddhu. Just then, Gutthi comes there dressed as a bride wearing red color Kurti and Dupatta.  She carries food and sweets to complete the Karva Chauth fast ceremony and comes on the song Haathon mein puja ki Thali.. Ghar Aaja Pardesi song (from the movie Dilwale Dulhaniya Le Jayenge, 1995). She speaks to Ranbir of waiting for him to complete the Karva Chauth. She acts like looking at the moon and Ranbir gives her food to eat and also acts like showering a kiss under the Dupatta invoking a laughter. Gutthi also touches Ranbir’s feet as his dutiful wife and Bittu accuses her of eating yesterday and asks whether she really kept the fast for Ranbir. She replies that Bittu have a memory problem and suggests him to eat Chyawanprash instead of Dhoklas. Gutthi speaks that Ranbir came earlier last year for the marriage and today came for the Gauna function [marriage custom associated with child marriage] as well, Right ? Bittu speaks that Ranbir came for football promotions and thinks that she is mad. Gutthi says she is right and suggests that Ranbir might be afraid to think of her as Gutthi Kapoor. She wants to prove her words and then takes out a baby and calls him as Gogo and hands to Ranbir.Ranbir on a lighter note suggests that since the baby doesn’t have hair then wants to confirm about the baby from Anupam ji who visited comedy nights couple of times. Gutthi sticks to her point and calls Ranbir as the papa of the baby. He humorously requests Gutthi to wait for him until 2055.  Gutthi leaves from there after showering much emotions and dialogue with Ranbir. Later, Ranbir suggests to Kapil that if Mithun Da wasn’t an actor then he would have been a good footballer and shows Mithun Da’s trademark disco dancer dance step to prove his point invoking laughter. 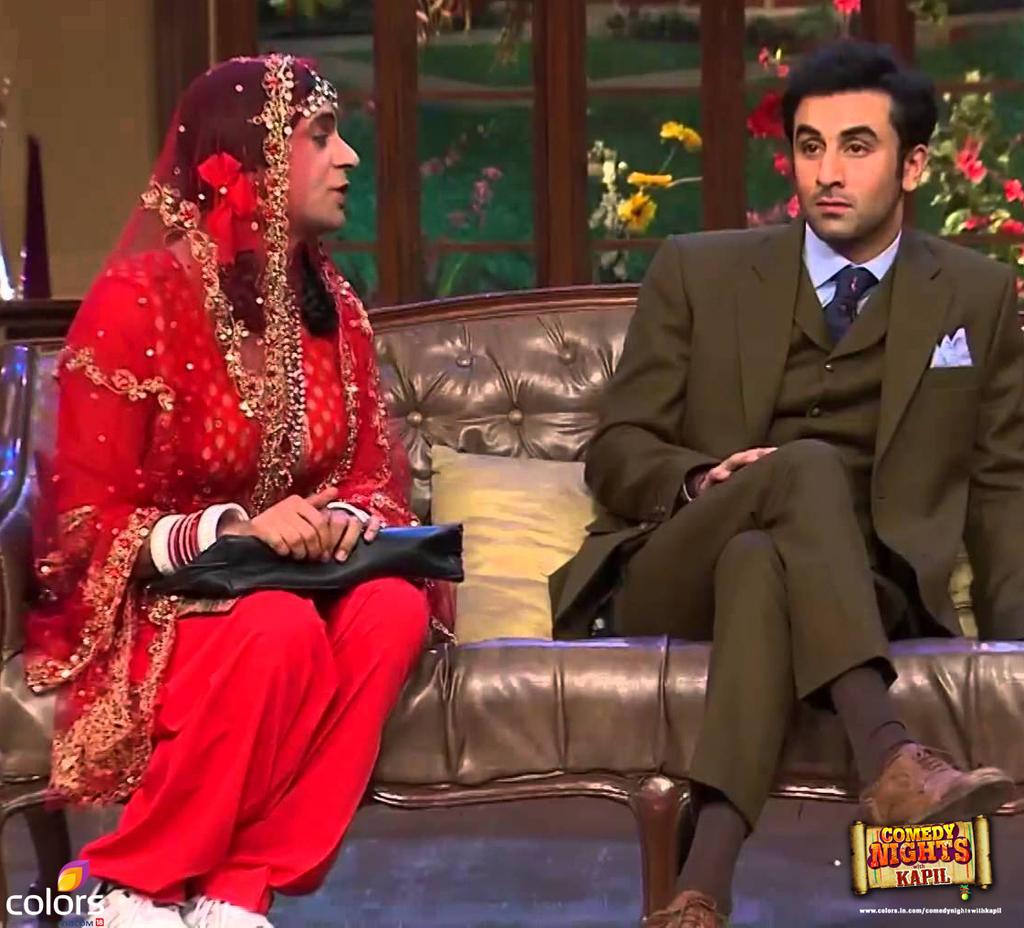 Daadi and Pankhudi gets engaged in a football match with Ranbir on stage while wearing Mumbai FC jerseys. Pankhudi is wearing boxing gloves as well. Ranbir starts well with much energy and scores a goal. After a while, Pankhudi gets the football and she puts the ball in her net instead of opponent’s (Ranbir’s) net. Bittu asks Pankhudi why she scored against her own team in the same net. Pankhudi replies that if she has an account then why to put money in other’s account which was just analogous to scoring in football to saving money in one’s account but doesn’t have a meaning and context. Kapil opens the floor to the audience there. A woman from the audience speaks of being a big fan of Ranbir and wants to dance and make the environment there like that of a marriage on the set. She comes with couple of ladies and orders Dhol and Kapil goes on to play it as per lady’s request. Kapil, Ranbir, and players carries the Dupatta and wears it like girls and dances with the ladies while Kapil does the singing on the Mehendi song followed by Gulabi Aankhen  Jo Teri Dekhi Sharabi Yeh Dil Hogaya. Ranbir and his players are having good time with ladies and grooves well. Kapil signs off by suggesting people to keep smiling, laughing and watching Comedy Nights.

Additional Note:
* Mumbai City FC is a football franchise in Indian Super League (ISL) . Wikipedia page of the FC and it is owned by Ranbir Kapoor and Bimal Parekh (Chartered Accountant). Currently, matches are underway in ISL and the winner will be decided on 20th December 2014. Mumbai City FC tagline is One City. One Heartbeat.
– Indian Super League football match schedule site.
– Gulabi Aankhen JoTeri Dekhi Sharabi Yeh Dil Hogaya is a song from the movie The Train (1970) sung by Mohd. Rafi and picturized on actors Rajesh Khanna and Nanda.