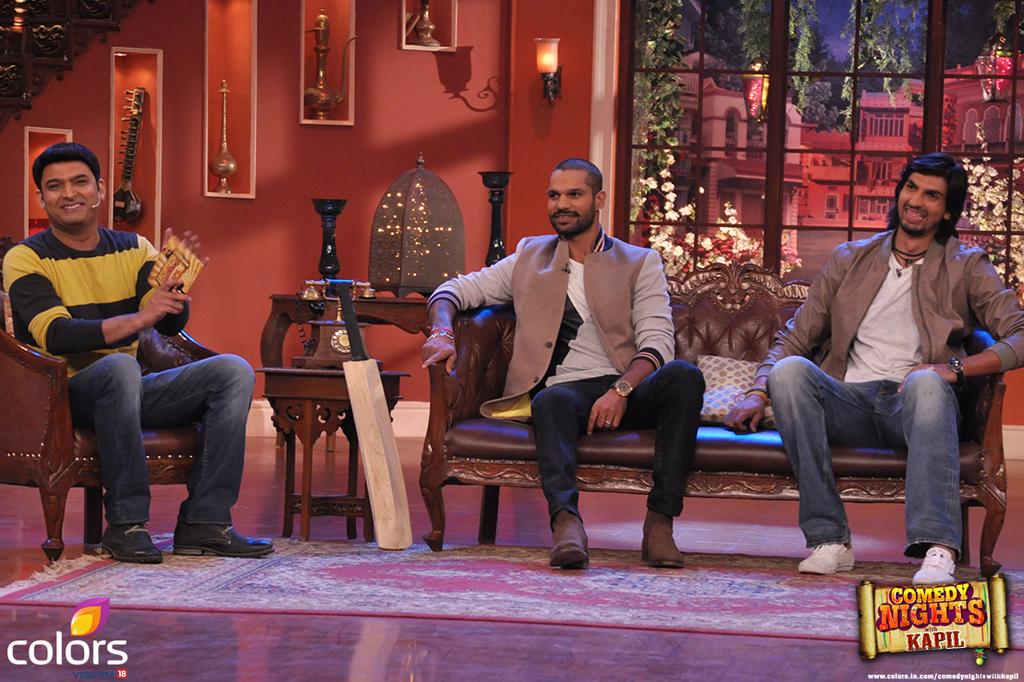 Kapil starts the show and speaks that if there were no games then we would have felt bored a lot. He speaks that kids nowdays do play indoor games more thus do not get dirt much. He speaks about his own childhood when he used to play outdoor sports and get sun marks on his body and his mother used to scold and slap him at the same sun burns places. Kapil suggests that mother is right because in the morning she used to take bath for her children but in the evening the child gets all sun burns and rashes on his body which annoys her. She even couldn’t identify the kid. Kapil speaks about strange games played by kids in his village/town referring to time of his childhood. Such games were kids competing in spitting, peeing on the wall. He speaks that when the parents doesn’t want their kids to play some sports and later after many years it turns out that the kid has excelled in that same sport. For such event, Kapil equates to making your moustaches upward so as to feel proud and Siddhu speaks of forgetting to pamper his moustache after getting married and then makes a taunt at Bittu asking what has he done until now – Whether he has become a father ? Kapil speaks of not doing any wonder and instead wants to invite people who did many wonders.

Kapil speaks about two personalities who have made special place in Indian Cricket with their playing ability and determination. He says the first personality is the one who doesn’t wish to grow his hair referring to Shikhar Dhawan, and second personality is one who doesn’t wish to cut his hair referring to Ishant Sharma. Kapil welcomes Shikhar and Ishant on his show and they come on Do you want a partner ? song (from movie Partner). Kapil greets them and says that Ishant is taller than Shikhar though Shikhar actually means top height and calls them as tigers. Siddhu praises Shikhar’s moustache and then Kapil asks Shikhar why people used to call him Gabbar ? Shikhar replies that when he was playing his Ranji trophy games , when there were big partnership by opposite team, his own team players on pitch used to feel bored. He used to re-energize them by shouting at them with some abuse on lighter vein. Kapil reminds Ishant on Rohit Sharma’s recent knock of 264 runs and asks him about the bowler’s future. Ishant replies that now we need a bowling machine on pitch as Rohit is playing so nicely. He reminds Kapil on how Rohit hit a shot when the ball pitched on off-stump and he hit the shot over leg stump and then validates the need of bowling machine invoking a laughter. Kapil speaks about Ishant’s long hair which were much longer earlier and also Shikhar’s special moustache. He asks whether they carry such traits to attract girls towards them bringing smile. Ishant replies on not being sure of girls getting attracted but can say surely that they get jealous of him since he has longer hair than theirs. Kapil again cites that Ishant’s run up with long hair looks like the one that he is going to attack someone and compares his run-up with Ghazni’s attack. 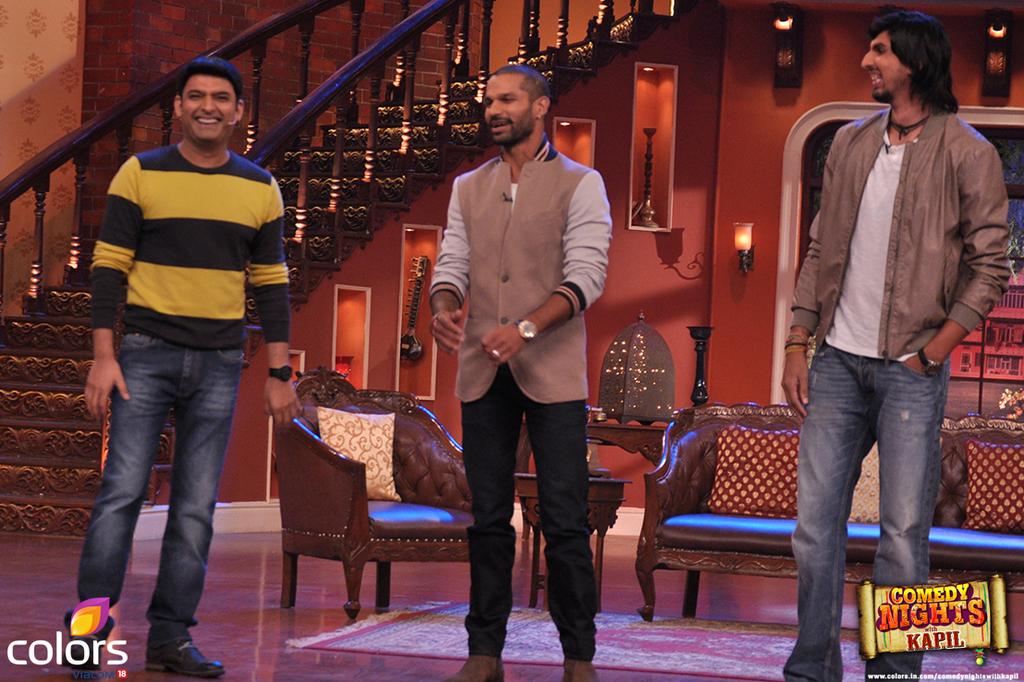 Kapil asks them whether India and Australia cricket relations on the pitch will be better after the recent visit of Prime Minister of India to Australia where he signed many agreements and pacts. Ishant speaks of playing in the same way like earlier. Shikhar speaks that Australian cricketers show aggressive nature, and if they come and pass some abuse, then a punjabi guy from Indian team will not remain silent even though relationships might be getting better. He speaks that instant reply will always have fun. Kapil begins his small Q&A session with Shikhar first. He asks Shikhar whom he will give the title of Ek Villain (from the movie). After some pondering, Shikhar replies Chris Gayle since he can defeat the entire team (opposite) with his batting. Next question, who fits the title of Creature 3D movie and Shikhar gives Ishant as the answer. He reminds that Ishant’s height is 6ft 5 inches which is a lot and not seen commonly in Indian people. Kapil gives credit to God for Ishant’s height and Ishant at his end gives his credit to his parents on a lighter note bringing smiles.

Laccha comes on the stage as a vegetable vendor with his cart and inviting people to buy his vegetables. He greets Ishant and Shikhar. Sooner then, Gutthi comes as a Saree vendor and shouts – Saree Lelo.. (Take Sarees) and soon finds Ishant and Shikar. He calls Ishant as paracetamol Ishant and then informs Shikhar that she was supposed to be in women’s cricket team. But they didn’t keep her in their team and suggested that she looks like a Third Umpire. Moreover, they wanted her to leave from the ground since 3rd Umpire are not seen there. Thus, she left from there and started selling Sarees. Bittu asks Gutthi whether she is selling her mother’s sarees and she counters him by saying No and suggests that the sarees were worn by her father couple of times for trial just to check that the sarees will not slip from the petticoat. Bittu asks Gutthi and Laccha who will believe them and she replies that Shikhar and Ishant will endorse her product – Saree and after such endorsement people will get believe. Shikhar asks about the speciality ? Gutthi takes Shikhar with her and dresses him with a maroon color Saree. Gutthi also speaks a dialogue for advertisement which Shikhar while dressed in a Saree attire has to say. Gutthi’s dialogue – Ab Nahi Hogi Saas Bahu Mein Mara Mari.. Jab Dono Ko Mil Jayegi Ek Gutthi Ki Saree [Now there will be no fight between mother-in law and daughter-in law since both of them will get Gutthi Saree]. Shikhar speaks the dialogue with ease and effortlessly but with minor change. Laccha also wants an advertisement and gives Bhendi (ladies finger) to Ishant. He speaks about a dialogue asking people to eat Laccha’s Bhendi and was excited to market his vegetable. Ishant, Kapil and others get a smile on Laccha’s dialogue and energy. Overall, Gutthi and Laccha camaraderie have made Ishant and Shikhar amused and also brought smile on their faces.

Bittu as always get annoyed with Gutthi and Laccha and not impressed with them and wants them to leave otherwise he will hit them badly. Gutthi counters Biittu and asks how come he can beat Laccha since the sarees belong to her ? She wants him to beat her as she owns sarees and beat Laccha for his vegetables. Laccha tries to challenge Bittu and speaks of giving him hard reply but Bittu overpowers them and make them leave. Daadi will also be in full spirits and engage in grooving with Ishant and Shikhar in dancing with much zeal and energy. In the end, Kapil asks the viewers to keep smiling and watching his show. The show ends with Daadi, Laccha have some dance moves with Ishant and Shikhar on the Indiawaale song.

Additional Note:
* Ishant Sharma was born on 2 September 1988 in Delhi, and represented India in Test Matches, One-day internationals and T20 formats of the game and he is 1.93 m (6 ft 4 in) tall and plays as right-arm fast bowler.
– Test debut on 25 May 2007 v Bangladesh; and Last test played was on 17 July 2014 vs England
– Fifth youngest player to take 100 Test wickets in 2011 and became the fifth quickest Indian to grab 100 ODI wickets in 2013 while playing against South Africa.
– He is called a rhythm bowler but still one of the fastest Indian bowlers with bowling speed in excess of 150 Km/hr on several occasions in international cricket as well as the IPL. He clocked the fastest to be 152 km/hr.
– Currently plays for Sunrisers Hyderabad in IPL.
– Read more at his Wikipedia page and ESPN Cric Info page.

* Shikhar Dhawan was born on 5th December 1985 in Delhi and represented India in Test Matches, One-day internationals and T20 formats of the game. He is 5 ft 11 in (180 cm) tall and plays as left-handed opening batsman.
– Played for India Under-17 and Under-19 before his first class debut. Debuted in ODI first in 2010 against Australia. Test Debut in 2013 against Australia and he scored the fastest century (85 balls) on debut by any batsman. Fastest Indian to reach 2000 runs mark.
– Last Test: 27–31 July 2014 vs England; and Last ODI: 5 September 2014 v England.
– Shikhar also plays for Sunrisers Hyderabad in IPL.
– Read more at his Wikipedia page and ESPN Cric Info page. 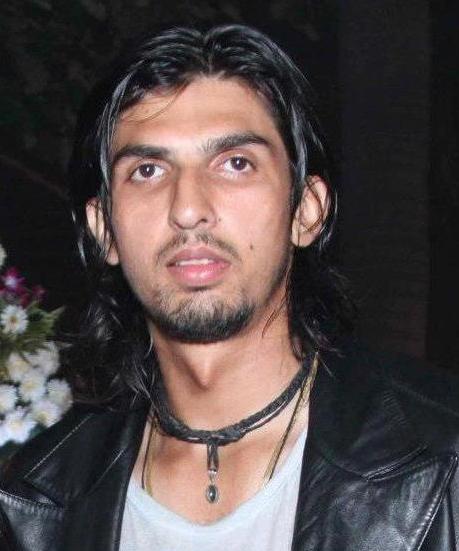 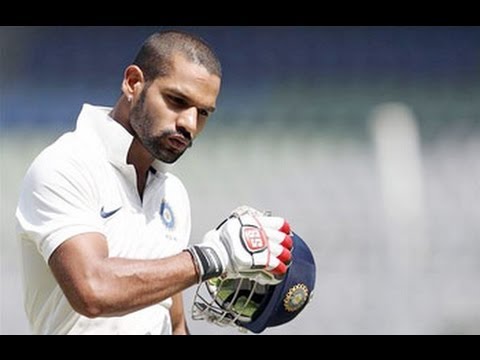