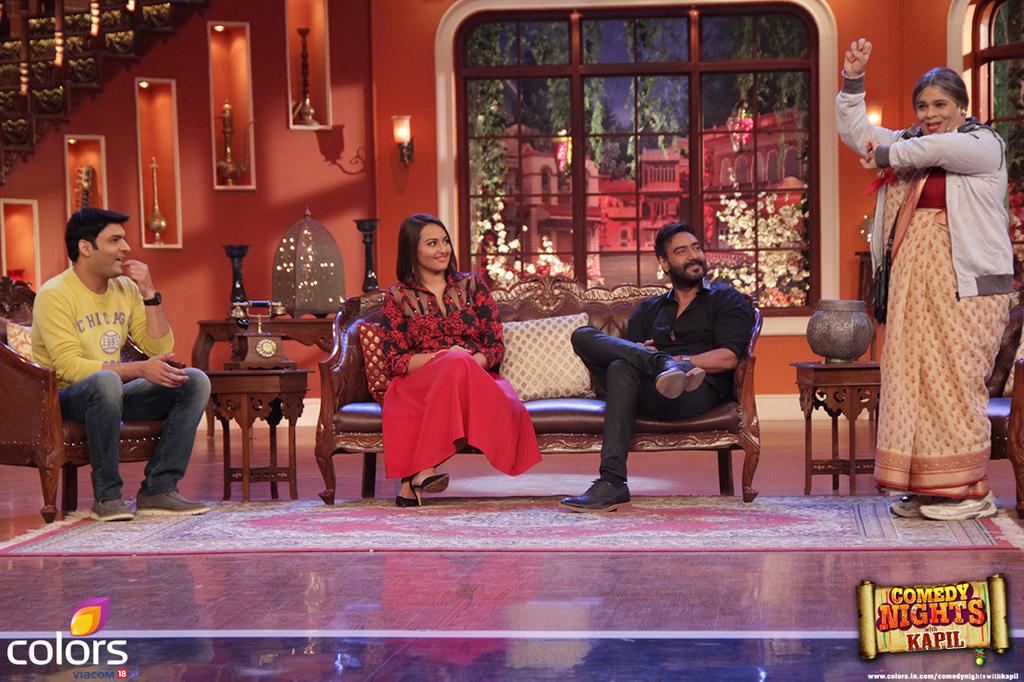 Kapil welcomes all and speaks about movies and suggests that there are many emotions in movies – action, romance, music but he wants to speak on action. He speaks that action in both Bollywood and Hollywood are exaggerated. He speaks of watching a movie where Dara Singh (legendary late actor) is seen putting a mark on the chest of a 1 month old baby with a 6 month knife. Kapil also speaks of watching a Hollywood movie, maybe Iron man where a man is attacking the Iron man. The man attacks the Iron man by firing bullets which hits his head, chest. For the next hits, the iron man tries to make movements so as to avoid getting hit. Kapil suggests how come earlier the iron man was fine in receiving bullets and then tries to avoid.

Kapil welcomes actors and stars – Ajay Devgn and Sonakshi Sinha from the movie Action Jackson who come on Keeda (Aaja Meri Gali) song from their movie. He calls them as his favorite and welcomes them on stage. Kapil greets Sonakshi as Sona and then asks – How are you Didi (sister) ? She confronts him a bit by suggesting that when she called him Bhaiya (brother) last time on comedy nights, he was upset. He replies that time have changed and now he is in love with someone else, and that someone is himself. Furthermore, he found loving himself after trying to dress up like Sonakshi and felt awe and hot. He suggests on not wearing it since Siddhu can get distracted which brings laughter. Kapil speaks of calling two people from the industry as Didi’s (elder sister) – Lata Didi (referring to Lata Mangeshkar) and Sonakshi Didi bringing more laughter.

Kapil welcomes Kunal Roy Kapoor, Actor and Prabhu Deva, Director. He speaks on being happy a lot since he knows that how much he speak Prabhudeva will not say anything invoking laughter. Kapil wants Ajay to speak a dialogue while Prabhu deva will show his expressions for the dialogue who is the master. Ajay speaks the dialogue – Main Ek Hi Baar Bolta Hoon Kyunki Doosre Baar Sunne Ke Liye Tu Nahi Rahenga [I just say only once because you will not be present to hear for the second time] while Prabhudeva shows the expressions and also shows his expressions for Action Jackson dialogue which has M.J. style. Kapil then asks Prabhudeva about Ajay’s favorite dance step and he replies cycle dance step. They all show that cycle dance step which has the smoothness and ease. Kapil opens the floor to the audience and a girl speaks of being a latin dancer and expresses her interest to show her dance skills to Prabhudeva. She is invited on stage while wearing high heels sandals. She dances on the Go Govinda song (from the Bollywood movie Oh My God) and Prabhudeva also joins her. Kapil applauds her and compliments that people couldn’t walk with high heels and she showed even how to dance with them. She then speaks of being slim until now so as to dance with Kapil. Kapil agrees after some hesitation and she informs him to lift her and make couple of turns. He manages to do well and thanks her.

Laccha comes dressed in a fighter avatar with a sword. He speaks on why he is there and reminds people about his dairy farm business and Gobar. Bittu confronts him and asks why he is there ? Laccha hits back and wants Bittu to accept his fighting challenge. That challenge is accepted by Raju who comes in an aggressive style and twisting his hands to show some fighting moves. Ajay wants them to fight blindfolded and Raju gets a sword to match with Laccha who possesses a sword as well. Both are blindfolded and Laccha shouts Aakraman (charge ahead to attack) and runs towards Siddhu’s place and hits randomly with his sword. Raju at his end is venting out all his anger on a bean sofa. After a while, Pankhuri aunty comes and greets Action Jackson and after seeing Ajay goes into Singham zone and shows the punch and have good time with them. Kapil would be grooving and dancing on Sonakshi’s request while she will be singing for him. Moreover, the Action Jackson team (including Kunal and Manasvi) will groove and dance with Kapil.

Kapil opens the floor to the audience again and Remo (Choreographer, director) turns up to speak and he informs on being present in an adjacent set and when he learnt about his favorites on the show so he came to see them. Remo directs his question to Prabhudeva and says that the world has seen Ajay’s action but we have not seen Jackson. Kapil welcomes Remo on stage by saying he is famous and well-known for his M.J dance skills. Prabhudeva, Ajay and Remo goes on to show some dance steps in M.J. style with their movie dialogue in background. Kapil ends the show by asking people to keep smiling and watching his show. He greets all and grooves and dances with Sonakhi in the end credits.

Additional Note:
* The movie Action Jackson’s wikipedia page.
– Actress Yami Gautam is also part of the cast.
– It is scheduled to release on 5th December 2014.

* Kunaal Roy Kapur is an Indian film actor and director.
– He was born on January 13, 1979 in Mumbai.
– Debut as TV actor in Just Mohabbat TV series as Sanjay/Sanju [1996-2000]
– Some of his recent Bollywood movies which got him much appreciation are Delhi Belly (as Nitin, 2011), Nautanki Saala (as Mandar Lele, 2013).
– His elder brother is UTV CEO Siddharth Roy Kapur and Aditya Roy Kapur – Actor/Star is his younger brother.

* Manasvi Mamgai is also part of the cast.
– She is an Indian supermodel, born on 10 October 1989 in Delhi and schooling in Chandigarh and was crowned Femina Miss India 2010 and represented India at Miss World 2010.
– She excelled in dancing and skating during her childhood years. Read more at her Wikipedia page.

Image credit: Kunal and Manasvi’s photo from their respective Wikipedia page, and Twitter pages of Comedy Nights and Colors TV.