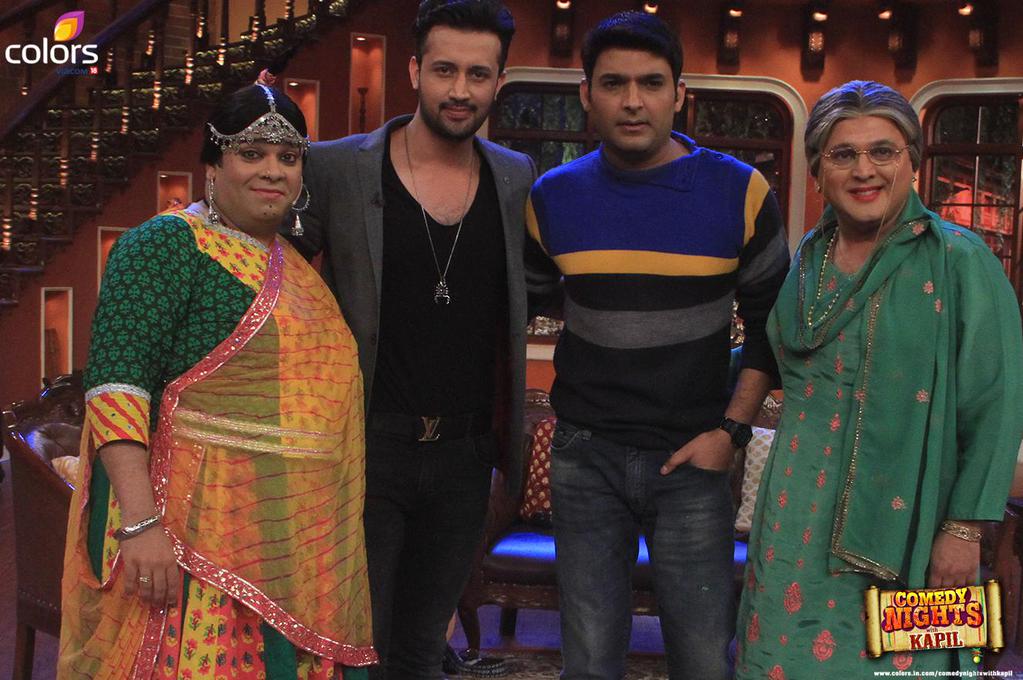 Kapil welcomes all and shares an anecdote about visiting a friend and asking him some money like 100 INR. The friend in a teary voice started speaking about his own compulsions – ill father, not able to pay son’s fees, delivery of his wife soon. Instead of taking money, after listening to his friend he gave him 200 INR. These lines of Kapil brought few laughs.

Bittu comes as Ghusli and agrees to work with Daadi
Daadi comes while bringing some sweets and speaks of winning lottery. Bittu becomes happy and after learning that she won 50,000 INR he tries to scold her by saying that he danced worth 60,000. Daadi says that Bittu only loves her for money and he replies on not even seeing money. She speaks of investing money after finding a reasonable investor. Bittu asks her that she can trust outside people but why she can’t trust her own grandson. She speaks of knowing well that he will only spend the money lavishly and will not help her. Bittu speaks of getting hurt by Daadi’s words and leaves from there. Daadi prays to God asking for some good path and Bittu’s sasur comes there and looks at her.

Bittu comes in a new avatar and calls himself as Ghusli and speaks his mother’s name as ketli (Kettle: special pot for boiling water) and his grandmother as Gutli (seed). Bittu’s sasur suggests Ghusli that you can go anywhere according to your name. Bittu as Ghusli speaks that his sister has really ran away as earlier he referred Sister Bhagli. Daadi introduces herself as the owner of the house with name Dolly. Ghusli speaks of liking her name Dolly. Bittu’s sasur asks him why did he came there ? He replies of coming there to do business since he knows that Sharma’s family do good business and shows a Baba ji Ka Thullu sign. Daadi says that he came at the right place and calls herself as the head of Sharma’s family. Later, Bittu’s sasur asks Ghusli on what his factory will produce ? Ghusli replies of producing Khachar [mule: offspring of a male donkey (jack) and a female horse (mare)]. Daadi wants to join his company and Ghusli replies of choosing her by saying Choosli.

Atif’s entry and his interactions with Bittu’s family and audience
Atif Aslam comes and in a serene setting sings the song – Aadat.. Na Jaane Kabse, Na Jaane Kabse Umeedein Kuch Baaki Hai..Mujhe Phir Bhi Teri Yaad Kyun Aati Hai… while playing guitar. Siddhu and Kapil are listening to Atif’s singing patiently and follows it by applaud. Kapil asks Atif that when fan girls texts him message so whether speak about his songs, looks or something which he can’t share there openly. Atif replies that most of the times the things are discussed which can’t be shared in open. Kapil tries to pull the leg of Siddhu a bit by recalling his own college days in Patiala. Daadi comes like a musical instrument vendor and carries a sack along with her. She shouts for the people to buy the items and doesn’t wear specs. Bittu asks her what she is doing ? Daadi makes a taunt at Bittu and suggests that she is doing hard work which he isn’t aware of. Moreover, because of such Bittu’s attitude she thinks neither money nor child is coming to their home. She wears the specs and becomes surprised to find Atif sitting there with Bittu. She starts to pamper him fondly and speaks of searching for him. Bittu asks whether she wanted a live show from him thus trying to find him. Daadi replies no and actually wanted to show him all the instruments which she is going to sell. There are antique pieces which will create unique and different music. She takes a bottle first and calls it as Auranzeb’s Bigul (musical instrument). Atif suggests that it is an alcohol bottle not any musical instrument. She replies on adding a base and a wooden cap to make it look like an alcohol bottle. Atif speaks that Daadi is very old which was a small taunt. Bittu wants Daadi to play and create music since she was calling it as a Bigul.

Daadi agrees and says that nowadays everyone needs to play their own pungi and then tries to create sound by blowing air inside the bottle but gets weird sound and couldn’t succeed. Bittu makes a taunt by suggesting she is playing her own trumpet. Daadi tries to come closer to kiss Atif but he manages to pick Bittu’s landline and tries to call police so as to evade Daadi’s kiss. But Daadi is relentless like always and gets better hold of him and speaks that love between two countries will increase with her expressions and goes on to shower kisses to him. Palak comes in a colorful dress and wears ornaments so as to impress Atif and greets him with a Dhol and Nagade dance step and he also joins her.

During audience interaction, Atif dances with audience member and Kapil on the Dhinka Chika song (Ready movie) and grooves well. Daadi then suggests to Atif that he only sings for youngsters and not for elders like her. She asks him to think about elders and wants him to sing a song which will tickle her Rirh Ki Haddi (backbone) but to mean funny bone. Atif gets a guitar and dedicates his song to Daadi and elders of her age. Daadi asks all elders to enjoy. Atif sings 70’s melodious songs Pyaar Deewana Hota Hai song (from movie Kati Patang, 1971) – Suno Kisi Shayar Ne Kaha Bahut Khoob Mana Kare Duniya Mere Mehboob.. Mastaana Hota Hai..Yaad Hain Mujhko..; and Kya Hua Tera Vaada.. song (from the movie Hum Kisise Kum Naheen, 1977). During his singing, Daadi goes from slow dance, kissing on guitar, sweeping the floor to high jump dance with excitement, drooling over Atif. Moreover, Daadi had some singing lessons with Atif as well. Kapil ends the show by asking the people to keep smiling and watching his show.

* Dhol is a musical instrument with double-headed drum widely used with regional variations throughout the Indian subcontinent. The one who plays it carries a special expression of face and also frequent rotation of the whole body. Read more at its Wikipedia page.

* Pungi, a musical instrument is also called been or bin. It is a wind instrument played by snake charmers in India and Pakistan and consists of a mouth-blown air reservoir made from a gourd, which channels air into two reedpipes. There are no pauses when playing it and to accomplish this the player employs circular breathing. Read more at its Wikipedia page. Hulusi is a chinese instrument similar to Pungi.

* Nagade is Kettle drums or Timpani which are musical instruments in the percussion family. It consist of a skin called a head stretched over a large bowl traditionally made of copper. Its Wikipedia page.