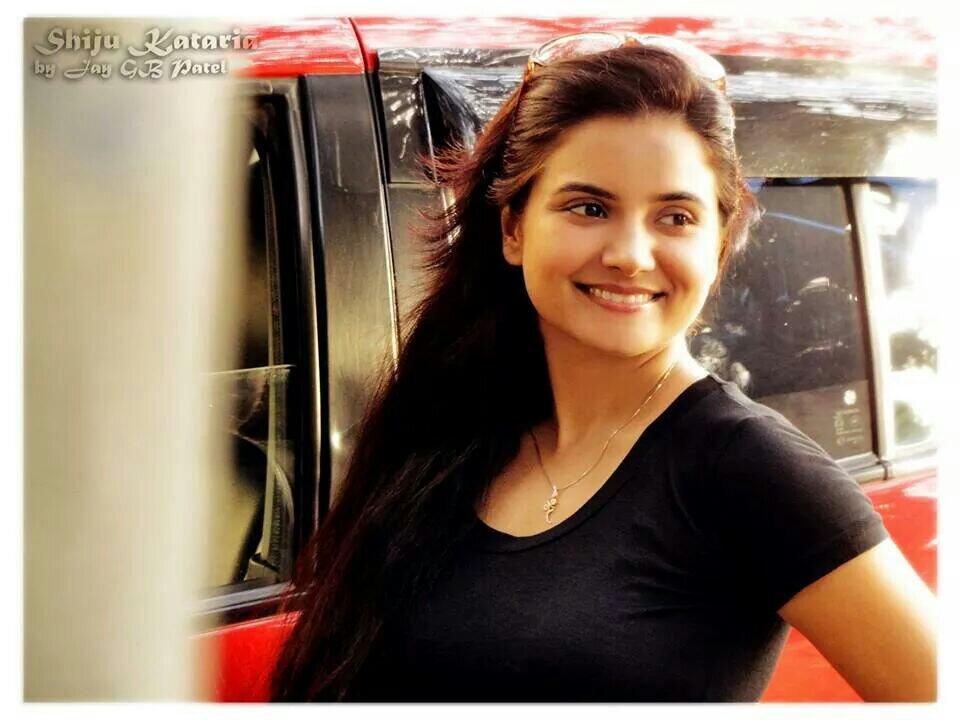 Surbhi Jyoti (the hostess) starts the show and speaks that love never dies because it has so much strength and is a strong feeling and can be alive across time boundaries. She speaks about the promises that we make to have love forever but nowadays it ends on a small note as well. Though, love remaining forever is almost impossible but sometimes it does remain. Today’s love story is about Shaurya and Shivani from Meerut and their eternal story. Shivani is speaking with a publisher about her book Love Bound which is based on her love story. Her love was incomplete and many years later Shivani went back to complete it. Shivani speaks about the story which started with her arrival to a school – Royal Cottage which she has re-joined [Aaj Phir Usse Khareeb Aaya Hoon.. Ek Pal Yehi Tera Mera.. song from the movie Creature 3D plays]. She starts working there and starts writing about her journey that her love will not remain incomplete. She goes to the school to begin her teaching and gets welcomed by students and informs them of teaching English literature and also dramatics. She asks students about love. A girl speaks that love is unconditional and another speaks that her dog name is love on a lighter note and is also faithful. Another boy confesses his love for a classmate. She recollects something and soon the principal comes there and asks her to follow rules and suggests that love doesn’t have scope there. He welcomes her to Royal cottage school. Surbhi (the hostess) speaks that the principal Vikram Rathore doesn’t have a problem with love but with the aftereffects of love and thinks that people cannot handle it and also it brings despair and calamity. Thus, he banned love in school’s campus. Shivani believed in love and started spreading love in the school and was bringing change.

Shivani goes on with her dramatics classes and asks students to enact some scene with feelings. The principal sees the students enacting those dramatic scenes and remembers his son’s Shaurya pleading him many years ago to not restigate Shivani from the school. Shivani comes to meet Shaurya’s dad Vikram and he informs that she has to follow rulebooks and the students come there for study and not for core dramatic acts. She can only see Shaurya though he is not around and he asks her to continue spreading love. It turns out that Shaurya is no more alive and Shivani comes to meet Shaurya’s dad and speaks about arranging a play whose name is Love story and invites him. He informs her on not having time but his wife convinces him to attend it. Shivani is glad and leaves. Shivani speaks on the premise of the play and suggests that love is an important facet of humans and informs all that today’s play is a true story depicting such emotion. The play starts with young students enacting some moments of love: proposal , acceptance, villain of their love story [boy’s father taking him away]. Shaurya’s dad again remembers Shauya’s pleading to him to not restigate shivani from the school [Jo Tu Mera Humdard Hain.. song plays]. Vikram and Shivani both cries at their end while she gets comfort by feeling the presence of Shaurya. Vikram Rathore is being warned to return back the land where his school is situated by the land owner. He is being told to vacate in 1 month and there will be a resort to be build-up. Vikram wants some more time but in vain.

The men with land owner are also thinking to thereaten and hurt Vikram if needed. Shivani tries to come close to Shaurya’s dad and she continues to get support from Shaurya who is omnipresent for her. Shivani was day dreaming some nice moments in the school and Vikram sees her in that state and wants to speak. Surbhi (the hostess) speaks that Shivani knew that love will overpower all the things but she doesn’t know what’s store in for her. Shivani meets Vikram at his office and suggests that love and to be loved is beautiful. He replies on not having problem with people who love each other but is more concerned of the effects like despair and destroying nature. He speaks of terminating her work contract from immediate effect. She replies that as per contract he cannot fire her now. He suggests that only his rules will work and she reminds that its not rules but like torture. She suggests that machines are produced there instead of people and he doesn’t want to listen and gives 1 month notice to her. Shivani speaks to herself while feeling Shaurya’s presence and he suggests that she should first win his mother. Next day, Shivani rescues Vikram from getting hit by the land owner who came with some men to put pressure and harass him. Shivani warns the land owner and goons to go away from there since there are more 15 days for the notice to expire. She also goes to inquire about Vikram’s health at his home and suggests to Shaurya’s mom that he is like her father. Even the students wishes him get well soon. Vikram’s hand have fracture and Shivani takes care of him in his walk and other daily activities and inches closer to them. Later, in the night she feels happy and again feels Shaurya’s company who speaks of loving her and she says I love you too.

Surbhi (the hostess) says that love survives in difficult condition but it needs to be true and even a heart like stone can be melted. She proved to Vikram that love is not a bad thing and she also ignited love between Shaurya’s mom and Dad.

Vikram informs his students that the need is to vacate the school since the owners are goons and will not admit defeat. He promises all that he will make sure the students get admitted in good school. He calls them as family and speaks of his helplessness since he couldn’t save his family and cries. Shivani comes to speak and informs all the school is a family which can’t be closed down. She gets students support and shows the strength to Vikram and he feels overjoyed. Next day, she also gives a surprise to Vikram on his marriage anniversary which brings happiness to all. Shaurya comes in again and thanks her for bringing smile on his parents face. Shaurya’s mom thanks Shivani as well. Vikram asks Shivani why she is doing so many things for the school ? She informs on being an ex-student of 1998 batch and didn’t complete it since she moved because of her dad got transferred. She didn’t tell the complete truth and feels bit nervous and leaves. Shivani goes to meet the Chief Minister and couldn’t meet him. She comes home and speaks with Shaurya’s company about not knowing what to do since next day the demolition team will come to begin their work. He tells her to apply the last step to prove their love and it is the right time. He says that were not wrong before and even now and shows his confidence. Next day, the land owner Narayan comes with the bull dozer two hrs early than as per the notice deadline and in a mood to begin the demolition without any delay. Vikram and his students stand in-front and are not afraid. Shivani manage to speak with the CM after much efforts. She informs the CM that the students’ future is at stake and needs one signature from him and requests dearly.

She speaks more about Royal Cottage school which is building the children’s future since 20 years. He thanks her and declares the school premises as govt property. She gets relieved and comes to the school and stops the demolition by showing the govt order where CM declared the land as govt property. Narayan tears apart the govt order and she informs that it was duplicate and soon he will charged and arrested by the police. Shivani’s locket falls down and Vikram takes it and learns about Shivani and Shaurya relationship. She also comes to know of her locket not with her. He recollects about Shaurya’s plea to not restigate Shivangali aka Shivani and didn’t listen to his son at that time. The flashback shows Shivangali leaving the school making Shaurya heart-broken and much dejection. Shaurya is being told to think of some other girl as his life partner by his father during those times. He then asked his father to meet Shivangali atleast once and gets his approval. Shaurya was happy to inform the good news to shivangali and was on his way to inform her but meets with an accident and dies. The story comes back to present, Shaurya’s dad still gets pain to recollect his son’s dead. He informs Shivani that loving is easy but to manage it is much harder. Love always give pain and maybe he was not wrong. Shaurya’s love have changed their life. She speaks of loving Shaurya and even he loved her. During the time of his accident, she has decided on coming back in their life since it was Shaurya’s wish as well. She loves Shaurya a lot and though he is not alive but is omnipresent for her and with everyone. Vikram is happy with Shivani and accepts her whole-heartedly. Shivani was reading this story which he wrote in a book Love Bound. She calls Shaurya’s parents as her parents and suggests that true love is one which remains alive once it dies as well. She cries and says the reason for it is because such love is eternal.

Surbhi speaks that Shivani completed her love story and also wrote a book on it. She kept Shaurya in her heart. Vikram Rathore accepted his mistake and also wished he would have accepted Shivani and Shaurya’s love at the on-set. Surbhi says that love is the most beautiful feeling which can happen in just a spur a moment suddently and if its true it can remain forever and eternal. She asks the viewers what they would have done if they were in the place of Shivani and they can share the opinion using the hashtag #PTKK on Zing TV’s facebook and Twitter pages.

Additional Note: 20th December 2014
* We (TellyReviews) believe that Actors were amazing in their portrayal specifically actress Shiju. This story is the adaptation of YRF’s Mohabbatein movie and the central concept is centered with it. Congrats to Actors, the team and Zing TV.

* Senior Actor Gajendra Chauhan potrays the role of Shaurya’s father and college principal.
– He is best known for portraying the role of Yudhishtir in Mahabharat TV Series [1988-1990]
– Worked in 150 movies and over 600 TV serials. Read more at his Wikipedia page.