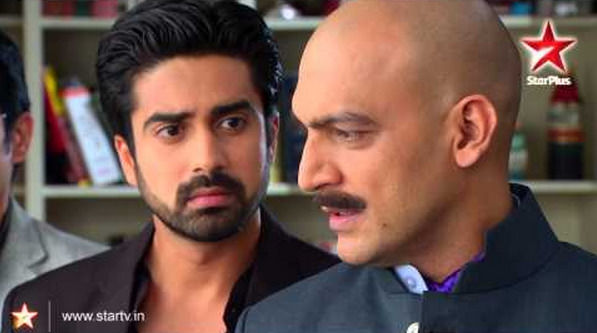 Anjali prays for Niranjan’s safety and happiness on his birthday and does a puja in the temple for his well being and long life. Her prayers get answered and Niranjan reaches Mumbai from Pune, by getting in the bus to avoid going to mental asylum. Varad gets the news that the mental asylum people missing out Niranjan and gets worried. He tells Sojal that even if Shlok comes to take his right back, he will not let any of his rights go off him. Sojal is worried seeing Varad’s evil state, but has to comply him, as she fears he will go back to Mansi if she does not keep him happy. Niranjan is in bad state and falls on the road, just close to Anjali, and she misses to see him. Later on, she spots Niranjan in such state with dirt stained clothes and hurt feet, and rushes him home, being shocked to see him in Mumbai. Anjali and Shlok are stunned seeing Niranjan in such state. Niranjan is glad meeting Shlok and thanks Lord to make him reach his son.

Niranjan tells them everything about Varad. Shlok does not act sympathetic to Niranjan, as he knows what sins Niranjan has done till now and even tried to kill Astha to show his clean image to the world. Shlok does not forgive Niranjan and acts annoyed, though he cares for him. Niranjan has a change of heart and apologizes to Anjali and Astha, for always showing the women less than men, ill treating and not respecting them. Anjali forgives Niranjan and persuades Shlok to forgive Niranjan. Shlok does not believe Niranjan really changed. Niranjan decides to prove his change to Shlok and Astha, and apologizes to them in public accepting all his sins and injustice done till now. Will Shlok’s heart melt and will he forgive his Baba? What will be Shlok’s reaction to know his ideal brother Varad turned into Jr. Niranjan? Also, the entry of Indrajeet Sarkar is yet to happen. Keep reading.