Paridhi and Urmila bring Gopi to the hospital and cry. Gopi is hospitalized as she gets hurt by Vivaan kicking her from the auto. Vivaan kidnaps Paridhi and Gopi risks her life to save Pari. Kokila gets the blame for kidnapping Pari, as she was with her before kidnap, and she dropped Pari home. She does not know what game anyone played and put blame on her. Radha has joined hands with Vivaan and playing double game with Modis. Kokila gets arrested and is taken away, while Gopi is critical in the ICU. Kokila tries to speak about her innocence and truth but is taken to lock-up. Ahem, Jigar and others tries to defend the arrest but in vain. Ahem also vents out his anger on Paridhi’s dad thinking he is creating such troubles for Gopi and is oblivious that it is actually Vivaan who was behind the kidnapping.

Before Vikram could confess his feelings to Shobha, a major twist came in the show as Sarika planned to kill Shobha. Luckily, Vikram saved Shobha in nick of the time, and is doubting Sarika to be after the well planned attack. Vikram confronts Sarika for her attacks on Shobha and why is she jealous of Shobha. Sarika lies to him, and thinks to hide her motive for some time to clear Vikram’s doubt. Samarth starts missing his kids and also Shobha, and his married life. He feels Shobha is getting close to Vikram, and maybe he made a mistake by giving her divorce. Samarth gets bail from jail after much efforts and comes back home. He finds his support in Sarika, and Sharda sides with Shobha. Samarth starts treating Shobha well, and wants to keep Vikram away from her. Vikram’s love gets back seat again, as he sees Shobha still having soft corner for Samarth and nil feelings for him. Did Samarth really change or is planning anything with Sarika?

Ria’s revelation of being a doctor is revealed to Abhi’s mom Rukmini and others when she prepares to save Dadisaa’s life from her severe heart ailment. Next in the track is the ghost mystery and Ria will come under the influence of a ghost/ spirit of a girl. The spirit has some connection with Abhi’s past and she was his former lover and was very obsessive. However, Abhi doesn’t remember that girl. The spirit will trouble even Abhi and it has to be seen how Ria’s life takes a turn under her influence and how she will overcome this problem?

Abhi and Pragya decide to do Bulbul’s Roka. Abhi plans a Russian theme and plans to make it grand. He is sure that her Roka will happen for sure and without any hurdle. Pragya and Abhi are getting closer in Bulbul and Purab’s functions, and surely viewers will get to see some romance between them.

Anu has left Rajat’s home as he could not keep her trust in their love. Anu tells her family that she can’t be in such marriage where there is no trust and respect. Rajat thinks about his actions hurting Anu in the past and regrets. Anu has proved herself innocent and Karishma’s track has been detached from Rajat’s life. While Alka and Rohan are progressing in their relationship and failed Astha’s efforts in making Alka away from Rohan, they also try to make Rajat sure of his feelings. Rajat apologizes to Anu for blaming her and not trusting her at the hour of love test. Anu talks to Rajat’s seniors and explains everything how someone’s crazy love and madness became the reason of all this matter. Rajat is cleared of all the wrong blames and his post is returned to him with all respect. Rajat resumes his duty and is thankful to Anu. Neil and Devyaani are taking their friendship ahead and taking steps in bringing Rajat and Anu together.

Swayam and Sharon have finally confessed their love to each other, and their love got a happy ending. Swayam proposes to her and she hugs him saying her yes. The show is ending this week, and the story which started with dance comes to the end of love making their lives blissful.

A goon asks Rudra to give away Maya to them, else he will shoot another girl. Rudra fights with the goons to save Maya. It shows he will be falling in love with Maya. Ketki Dave’s entry happens in the show as Thappadiya Maai. Her getup looks scary and also helps Rudra in the fight. Rudra meets Charles once again after the 12 year leap and Thappadiya Maai beats the goons by using stones in her dupatta, and making it a weapon. Rudra does not bend infront of the goons, and Charles’s entry is shown as he shoots the goons to save Rudra. Will Rudra develop feelings for Maya and what role she will play in his life ?

Suhani and Yuvraaj are happy together in the New year party. Soumya gets ready and looks pretty, ready to woo Yuvraaj. Yuvraaj does not see Soumya as he is busy in light talk with Suhani. Soumya asks Yuvraaj for a dance and tries to romance with him. Suhani looks at them and helplessly feels bad. Soumya gets drunk in the party and holds Yuvraaj’s hand as his wife. She confesses her love to Yuvraaj and he is stunned. Suhani also witnesses this and thinks Soumya is not in her senses and being mistaken assuming Yuvraaj as Krishna. Later on, Yuvraaj is left shocked when Soumya asks him to reply for her proposal. Krishna informs Suhani about Soumya sending divorce papers to him, along with the cheque of 10 lakhs INR. She gets puzzled thinking what is Soumya upto. Will Suhani realize Soumya’s intentions in wooing Yuvraaj and taking her place in his life?

Sid apologizes to Rajveer without any reason for family’s peace and happiness. It happens that Sid comes with Rajveer’s Chacha and Chachi to expose his true side and secret in front of DD. However, both uncle and aunt change their tone and don’t say anything against RV. Since Rajveer’s wife Samaira was threatening in leaving the home therefore Sid went ahead in his apology to accept defeat temporarily.

Ishita and Raman dance during the new year party and shares some nice moments together. The partners change and Shagun gets a chance to dance with Raman. The party is also attended by Bhallas and Iyers. To make Adi happy, Raman celebrates the marriage anniversary with Shagun by cutting a cake and even Ishita asks him to give the earrings which he gifted her to give to Shagun. Raman agrees and it touched by Ishita’s goodness. Raman and Shagun take a family pic with Adi and Ishita moves away seeing Raman and Adi happy. She does not realize what mistake she is doing by bringing Shagun closer to Raman. Amidst all this, Mrs. Iyer gets drunk and becomes high. Mrs. Bhalla praises Ishita for her sacrifices and says Raman is lucky to get her. Mihika and Ashok’s sensual dance in the party turns out to be the odd moment for both the families, and Iyers leave the party.

Ragini comes home upset from Agam’s birthday party. Neil has made her worried once again and Aarav has hurt her by his sillyness. She cries reaching home, and Nishi pacifies her. Later on, Aarav realizes his mistake and comes home. She does not talk to him, and he apologizes to him. She goes to the room and isolates herself. Aarav cries and Ragini’s heart melts. She forgives him. She will still have to face more troubles ahead in the show.

Niranjan is glad meeting Shlok and thanks Lord to make him reach his son. Niranjan tells them everything about Varad. Shlok does not act sympathetic to Niranjan, as he knows what sins Niranjan has done till now and even tried to kill Astha to show his clean image to the world. Shlok does not forgive Niranjan and acts annoyed, though he cares for him. Niranjan has a change of heart and apologizes to Anjali and Astha, for always showing the women less than men, and not respecting them. Anjali forgives Niranjan and persuades Shlok to forgive Niranjan. Shlok does not believe Niranjan really changed. Niranjan decides to prove his change to Shlok and Astha, and apologizes to them in public accepting all his sins and injustice done till now. Will Shlok’s heart melt and will he forgive his Baba?

Manik and Nandini are coming closer to realize their feelings of love and resolve their differences. Manik showers a kiss to Nandini to give a stamp about his love. Will MaNaN realize their mutual love and become lovestruck again ? 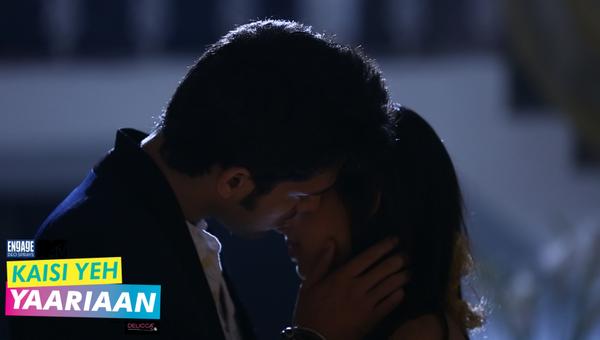