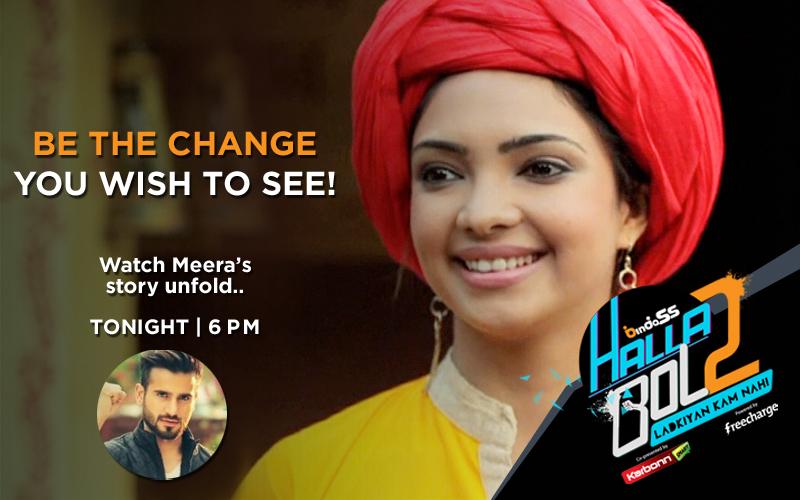 Karan Tacker (the host) starts the show and speaks that India has two faces – rural and urban and 70 % of the population lives in the rural part and even in this age of technology they don’t get the right info. The views and opinion of women are not taken into consideration. Meera came from US and how she can bring a change in the people living in a village where the men doesn’t want to listen to a girl.

The story is set in Rajasthan, 2007 and Meera makes her entry in the village in a jeep and amazes the people. She gets a call from her elder brother Ashok and she promises to return back soon along with her grandfather (Dada) and grandmother (Dadisa). She comes and greets her Dadisa who learns she came alone while driving a car. Meera is told to freshen up and she shows the photographs of her office and she will be going to London for 3 months. Dadisa is happy and calls her as a son. Meera suggests that girl’s are not lesser than boys and asks about her grandpa Dada ji. Another girl Veena speaks on how few people died in the village because of food poisoning and many are admitted in the hospital. And Dada ji is worried and staying at the hospital taking care of patients. Meera decides to visit her Dada ji and goes to the hospital. She finds and greets him and he learns that she came alone and shows his concern. He thinks she is stubborn and soon Dada ji wants everyone to go inside. A man Ranji comes and meets Meera’s Dada ji and village head. He first tries to speak sweetly but with bad intentions and he then directly threatens Dada ji. Ranji speaks of not talking but will show his actions. Dada ji gets more annoyed and gets admitted in hospital. Meera learns that her brother Ashok has declined to help Dada ji and doesn’t wish to interfere in court, lands, and with goons. Meera then learns from her grandmom that Ranji wants to forcefully take farmer’s land and wants to set-up a factory there. Out of 40, 12 farmers have sold their lands under compulsion. Meera thinks it is dependent on farmer’s will and her Dadisa suggests that Ranji is very powerful and have contacts with big people. Dadisa also asks Meera to act like girl and she doesn’t need to think about those matters.

Meera begins to dvelve deeper on farmer’s lands. Next day, Ranji attends a meeting with village head and other farmers asking them to sell their lands. Mohan confronts Ranji and speaks of not willing to sell the land. Meera comes there and she is told to not come in men but she starts to speak and says that Ranji is fraud and is lying. She speaks of reading those papers and their land worth is a lot and Ranji is even not offering ¼ of that price. Moreover, it is also written that the farmers will get the money after 2 yrs and also they don’t have control on their crops. She asks where they will go and what they would eat ? As Ranji’s plans get expose, he asks the people whether the women make decisions there. He threatens people more and even wants Meera to leave otherwise he will harm her. The village head asks Mohan to sell his hand since there is no other option. At Meera’s home, Dada ji is being told on how Meera took part in the meeting with the village head and under Ranjeet’s presence. Meenu comes and informs that their entire farms is burnt and it is done by Ranjeet and his men and even Mohan was beaten. Meera speaks of giving punishment to Ranjeet and goes to police station. The inspector speaks of seeing into the matter though not interested in it and soon she finds Ranjeet there. He writes on a piece of a paper FIR and makes fun of Meera and the law. He looks at her in bad way and threatens her on how she is a girl. The inspector was smiling and Meera asks him why he is quiet. Ranjeet speaks that all things are in his control and everyone only listens to him.

She comes back home and soon Ranjeet’s men comes and ransacks her home. Ranjeet comes there and he forcefully holds Meera’s hand and speaks on how meera tried to lodge FIR complaint. He asks even if the police files a FIR then what would have happened then ? How is she going to prove that he has burnt her farms since his lawyer will prove that there is no role of Ranjeet or by anyone in the fire. He threatens that her initial case needs to be strengthen and wants to abuse her. Meera’s Dada ji stops him and he threatens her that next time he will not leave her if she comes to face him. He asks Dada ji to get ready with his documents and will come next day to collect them. Meera apologizes to her Dada ji for all those things and she is told to go back to Delhi the next morning. She cries and doesn’t find support. Next morning, she greets her grandparents before leaving to the city Delhi. On her way she recollects how Ranjeet threatened her Dada ji and how she is being told to act like a girl by her Dadi sa; Ranjeet’s threats. Her car breaks down and she steps down to take water for cooling down the car. She then recollects about food poisoning, Dadisa’s telling about Ranjeet’s plan to open a factory. She meets some villagers and gets their medical reports on food poisoning. In the village, Mohan is preparing to give his land to Ranjeet and apologizes to Dada ji. At the hospital, she asks the doctor to cooperate since the medical reports are wrong on food poisoning and wants to know the truth.

The doctor speaks of sharing the truth and Ranjeet’s men comes to know of Meera finding the truth at the hospital. He calls Ranjeet who tells him to kidnap Meera. He stops Meera at the hospital with chloroform and locks her inside a room. Later, Dada ji gets a call from meera;s brother Ashok who informs that she didn’t reach there. Dada ji wants to leave from the meeting to find Meera but is stopped by Ranjeet. Meera removes the robes which has binded her in the room and makes a call. She tricks Ranjeet’s men and escapes from the room and even initiates the fire alarm. Ranjeet gets a call and learns that Meera ran away. He then forces all the villagers to put their thumb impressions on the papers. She comes there and informs on how she was kidnapped at the hospital and the reason is she came to know his truth. She speaks that Ranjeet’s plan is not just to take lands but has more motives since he is not even a builder. She learns the truth from the doctor and farmer’s death have been atttributed to food poisoning but that’s not the truth. The truth is they died because of poisonous chemical found in their blood and it came from Ranjeet’s factory. The chemical flows into village’s river and lake and people once drinking that water face serious health issues and death. Everyone are shocked and she speaks that Ranjeet wants to hide the truth. He points a gun at Meera and threatens others to sign the thumb on the papers. The village head speaks of not letting the villagers and then other villagers becomes angry and starts hitting Ranjeet. The police comes there and arrests Ranjeet and his men. Ashok came with the police and the villagers compliment Meera on her courageous efforts.. Meera’s Dada ji and others are happy [Halla Bol tune plays]

The village head speaks of giving women the equal rights and also listening to the new generation and their thinking. He makes an announcement and assigns Meera as the new village head. All the villagers show their support and Meera speaks to her brother of deciding to stay back in the village and will fight for their rights and declines to join a foreign company in London.

Karan (the host) speaks that people decide to work in foreign countries for a better living and also for the status symbol but there are some who decides to stay back in a village. Meera had the opportunity to work abroad after spending some time with her grandparents but she challenged new rules and laws which has changed the outlook of the village. A guest Nikita Mistry – social activist shares her experience of finding some people who spoke to her of not getting basic necessities. She wrote letters to the govt but face many difficulties and even received calls why she is interfering as she is a girl. But she fought and not give up and finally the authorities listened to her complaint which she made for others. Karan says that girls can achieve a lot if since childhood they are given equal rights. He signs off by asking the girls to have dreams since they are not lesser than anyone [Ladkiyan Kam Nahi in hindi].