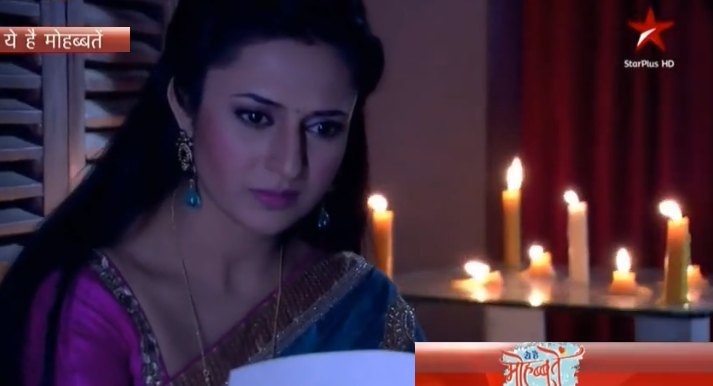 Shagun tries fooling Raman by taking Ishita’s place, taking advantage of the darkness of the room. Raman does not see her face and thinks its Ishita. He hugs her and talks romantically, while Shagun smiles and tries reviving their old memories. Ishita comes and is shocked seeing Shagun in Raman’s arms. Shagun tries to plant misunderstanding between them. Ishita switches on the lights, and Raman turns. He gets stunned seeing Ishita at the door and moves away from Shagun. He starts yelling on Shagun asking could she not tell him it’s her and he is mistaken. Shagun gives wrong silly excuses and Ishita understands she is lying, and it’s her plan to come between her and Raman.

Raman tries explaining Ishita and she says she trusts him and doesn’t need any explanation. She makes Shagun leave and analyzes Shagun has heard Raman asking her to come in Ruhi’s room. Shagun apologizes to Ishita acting sweet and says it just happened so soon that she could not react. Ishita thinks she did a mistake by bringing selfish Shagun home, but she has to bear her for Adi’s sake. She tells Shagun that she understands all her cheap tricks and never repeat it if she wants to stay in their house. Ishita says a woman can bear anything, but to some limit. A wife can’t bear to see someone snatching her husband. She can face Shagun or any storm to save Raman and her family. Shagun’s plan flops and gets angry seeing Ishita and Raman together.

Later on, Ishita gets ready in jogging outfit and asks Raman how is she looking. Raman gives a bad review with his usual taunts, and spoils her mood. He says the clothes look very tight and she is looking a bit fat. She says she won’t go for jogging now and goes to change. Raman says he is joking, and she looks very hot. He compliments her a lot and makes her smile. Ishita decides to keep Shagun away and her romance on. She is sure that Raman knows Shagun’s true face and will not fall in her trap. The show needs some valid logic reasoning for the tracks, as Adi is being very weird to pop up after 6 years and command full rights of his mother on Raman. Adi forgot how Shagun and he have ill-treated Raman when they used to stay at Ashok’s home. Keep reading.