Kumkum Bhagya:
Pragya and Abhi fall off from the cliff after he gets shot by Neil but it paves the way for them to come closer and Abhi realizing her love for him. They manage to not fall deep in the trench but instead on the agricultural straw  [similar to yarn]. The next challenge to Pragya was to save Abhi’s life which can only be possible if she removes the bullet from his body. After putting some efforts, she manages to remove the bullet from his body with the basic resources she had there, and not with medical services. Both stay in a small hut there where his recovery phase begins. Moreover, there was a time when Abhi got short of breath and having respiration problems. She decides to help him with artifical respiration, and hesitantly pushes air into his mouth from her mouth. This respiration [part of cardiopulmonary resuscitation] task is the first essential skill in first aid, but nevertheless it helped Pragya in saving Abhi’s life. On another front, Pragya’s efforts in Abhi’s life recovery has removed some of her love inhibitions towards him and also of their relationship of being husband-wife. Once Abhi gets recovered, there are more challenges and dangers waiting for them.

Diya Aur Baati Hum:
Bhabho learns of Sandhya giving her kidney to save her life from Bulbul and agrees to her request of wanting one of Sandhya’s twins. Ankita and Bulbul tie the protective thread on the second Kalash henceforth. Babasa learns about Sandhya’s sacrifice in giving kidney and laments on his past mistakes in evicting Sandhya out. While, Bhabho thinks of taking her decision as a big favor and not sacrifice but nevertheless she is sad about it. In the ensuing track, Sandhya’s Godh Bharai’s ceremony gets underway and she attends it with much shringaar. Everyone in the family are glad. Bhabho prays for Sandhya and her twins, and  showers blessings. She also does the rituals of Tilak and Aarti to Sooraj. Zakir also attends the ceremony and even dances to show his excitement and joy for Sandhya’s good news. 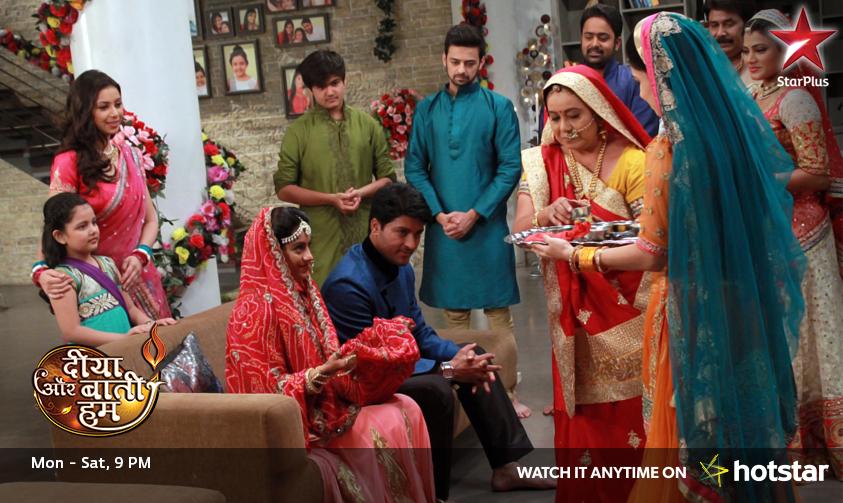 Nisha Aur Uske Cousins:
Nisha’s pre-wedding rituals – Sangeet & others get completed in pompous and grand fashion, and then comes her wedding day. Kabir has financial constraints thus borrow’s Nisha’s scooty to come with his Baaraat to take Nisha. He also brings his fake mom and they dance with the Baaraatis. Meanwhile, Viraj comes to know of Nisha’s marriage and also realizes his mistake of not believing her earlier and fell in the trap of misunderstanding. He reaches there around the same time when Kabir’s Baaraat is also present. Moreover, Viraj wants to clarify his point and also opens his heart out on loving her much. Nisha and Kabir are acting and even agreed to their wedding for the family’s happiness. What will be Nisha’s decision, whether she goes ahead to marry Kabir, or going to rethink on Viraj and her love for him ?

Yeh Hai Mohabbatein:
Adi is coming closer to Ishita while she shoulders all the responsibilities even when Ruhi is not with her, and also with a fractured leg. After learning about Adi’s fight at school, she goes there with Romi and Bala to receive him and also to know on why the fight took place. She comes to know the reason behind Adi’s fight, and it paves the way in getting her an idea on how to get back Ruhi from Shagun’s custody. She offers gratitude to Adi as she got an idea and some direction because of him. With full heart, she gives him sweets but with a small punishment of giving one less Gulab Jamun. Adi and Ishita’s bonding prospers while she steers ahead to apply her idea in practice to win back Ruhi at the earliest.

Tu Mera Hero:
The festive time of Holi comes on the show, and it came after Panchi got assurance from her father-in law Govind that Titu will change, and they need to keep trying and he is going to fully support her. Panchi learns about Titu not wanting to have color though he colors everyone, and she has a challenge to color him unlike the previous years where nobody has put color on him. Titu got saved by his mom Surekha, and thus colours from Panchi didn’t touch him. Next, in the track is Titu and Panchi along with family celebrating Holi in Mathura in a unique and offbeat manner after reaching consensus. They celebrate Holi with flowers. Panchi and Titu dance along with excitement, and Titu in his own carefree style throws flowers on her. Panchi’s feelings for Titu are evident and she enjoys those moments. Even the family enjoys to the fullest in that special Holi.

Saathiya:
Ahem and Mansi’s engagement is underway with Gopi and Jigar’s presence there as well. Gopi had accepted defeat on not able to stop it. However, the engagement twist comes with Kokila’s timely entry there and stops Ahem’s engagement. Kokila throws away the engagement ring from Ahem’s hands tells Ahem on how he took such decision of engagement with Mansi. She reminds how he can give Gopi’s respect to someone else and cannot let it happen. She tells mansi to leave from their life. Ahem counters his mom Kokila by reminding that he hates Gopi now. He also opens-up on how he never took decisions on his own before and only his mom took all of them. As he insults Kokila, Gopi intervenes and confronts Ahem, and tells him to stop insulting Kokila since she cannot tolerate such behavior.

Kokila hugs Gopi while Ahem and Mansi leave from that place. Kokila  also showers hugs to her grandchildren Meera and Vidya. In the track ahead, there is reconciliation moments with Ahem reconciling with his mom Kokila. But it would not be easy for her since Ahem stayed away from her for many years. So, when finally Ahem opens his heart out by realizing his mistakes, Kokila’s outpouring emotions can result in health problem.

Itna Karo Na Mujhe Pyaar:
Neil’s flashback scenes [FB] with Ragini are next in the track which will also going to unravel their connection with Suhani. Mihika Verma [Mihika from YHM] marks her entry on the show as Neil’s former girlfriend and is shown in the FB scenes. It is revealed that Suhani is Neil’s former GF’s (Mihika) daughter. Neil were having affairs with girls and Ragini were aware of it. In the FB, during one instance, Neil blames Ragini as his girlfriends are breaking friendship with him. Even his former GF is there with him while Ragini tries to figure out on why he is blaming her. Nevertheless, the larger question that comes out why Ragini married Neil if she knew of his affairs before their marriage, and another one on their divorce.

Kaisi Yeh Yaariaan:
Manik and Nandini are on the same page after she consoles him as he broke down after having a fight with Dhruv. Nandini provided emotional support to Manik and he reciprocated his feelings and opened his heart out. Manik takes a step forward to reconcile with Dhruv after Nandini’s words of positivity but Dhruv still thinks Manik as selfish. But before their reconcile, comes a twist with Nandini’s music teacher Pandit ji informing Manik that Nandini will partner Dhruv for the fusion concert. This development going to test Manik and Dhruv’s friendship, and their earlier fight might have created some ripples but also gave an opportunity for their friendship to get stronger. Cabir thinks that Aaliya can help sort out the differences between Manik and Dhruv, and such thing is helpful since Dhruv has insecurity and thought earlier that Aaliya haven’t forgotten Manik. With fusion concert news, how manik and Dhruv going to reconcile and get back their friendship ? Will Nandini be able to break the ice between two buddy’s – Manik & Dhruv ? 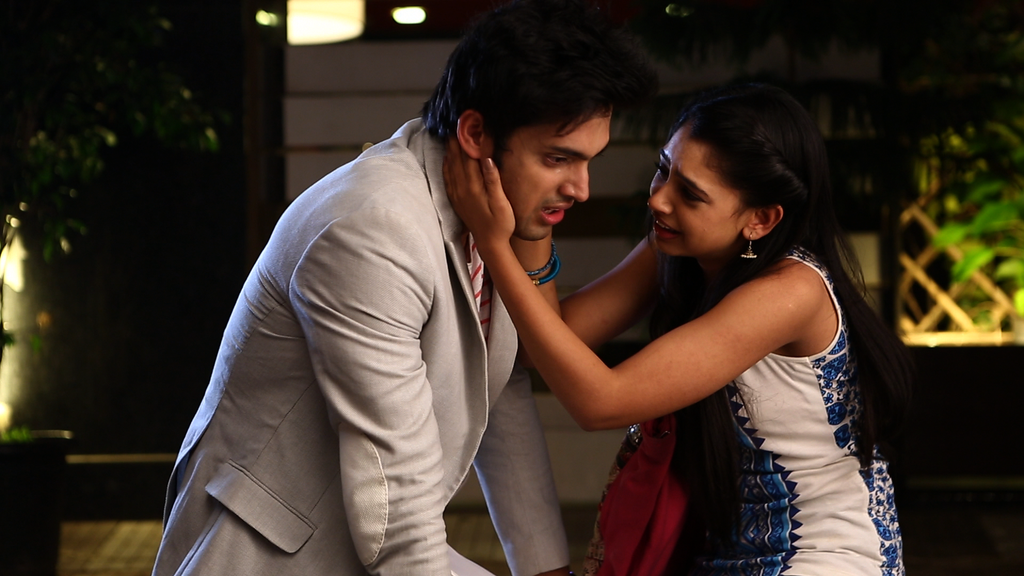 Warrior High:
The boxing day is approaching with Parth and Sid competing against each other while Ayaaz is going to manage it, and the winner will get the box which has Utkarsh’s Maa (frog). Vibha puts effort to overcome the deceit and bullying from Ayaaz & his gang all alone. Meanwhile, as students of Warrior High aka warriors are submitting their forms after choosing their electives – PCM or Economics, History, Arts, the truth of Siyali who took the identity of Angela there would be going to get unfolded. Sid & Parth are going to compete not only in boxing but also in studies – PCM electives as Urmila [Sid’s mom] changed Sid’s preferred electives against his wishes. There are some questions with Urmila’s past that connects with her son Siddharth, and also with Utkarsh Rajput whose identity as namesake holds relevance. Will Parth succeed in defeating Sid to win the box ? What will be Vibha’s counter move to thwart Ayaaz & his gang’s plans of misconduct ?