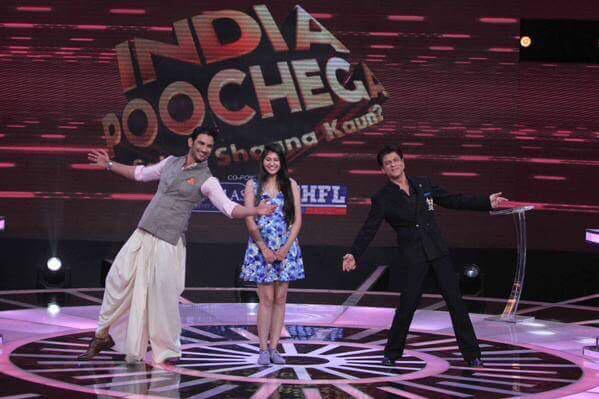 Shah Rukh Khan welcomes Sushant Singh Rajput [Actor, Star] on his show Sabse Shaana Kaun. Sushant wears Dhoti and seen in his fictional character of young Bengali private detective Byomkesh Bakshi of the 1940’s era [pre-independence, Calcutta]. SRK informs to the contestants – Yogesh & mom, and Gunj & mom that Sushant knows all secrets. SRK plays a small game with Sushant knowing the answer of what the contestants write for his question. Sushant answers correctly on what Yogesh and Gunj wrote. Sushant fondly spoke of being a big fan of SRK and talks about how imitating SRK was the talk of the town during his high school and college days. SRK asks Sushant to imitate him on that note, and Sushant goes on to imitate SRK and enact a short scene of SRK from movie Chak De India. Sushant enacted scene – Har Team Mein Ek Hi Goonda Hota Hoon Aur Mein Is Team Ka Goonda Mein Hoon, and ends with SRK’s signature hand pose.

Sushant informs SRK on his past experiences with him. He came to SRK’s movie Swades set with the wish to get an autograph but couldn’t got it. Many years later, Sushant was one of the background dancers when SRK was performing at an awards show. He humbly puts forward his desire to dance there with SRK as he got an opportunity. SRK calls a girl member from an audience and Shayesta – housewife with three kids comes there. Shayesta shares the same birthday date with SRK, and SRK humorously asks whether they are twins siblings on lighter note. SRK and Sushant dance together with Shayesta giving them good company. They dance on Ruk Ja O. Dil Deewane song from DDLJ movie with both of them matching their dance steps well. Sushant dances in SRK style and has amazing fun. Sushant’s movie trailer is shown next.

Sushant speaks to SRK and audience that his movie is Entertaining, Exciting and Intriguing. Moreover, he has put full heart and honesty. Finally, Sushant spoke of his film release date [3rd April 2015], and hopes people will appreciate it. Sushant offers his gratitude to SRK for inviting him on his show, and SRK reciprocates with best wishes and warmth.