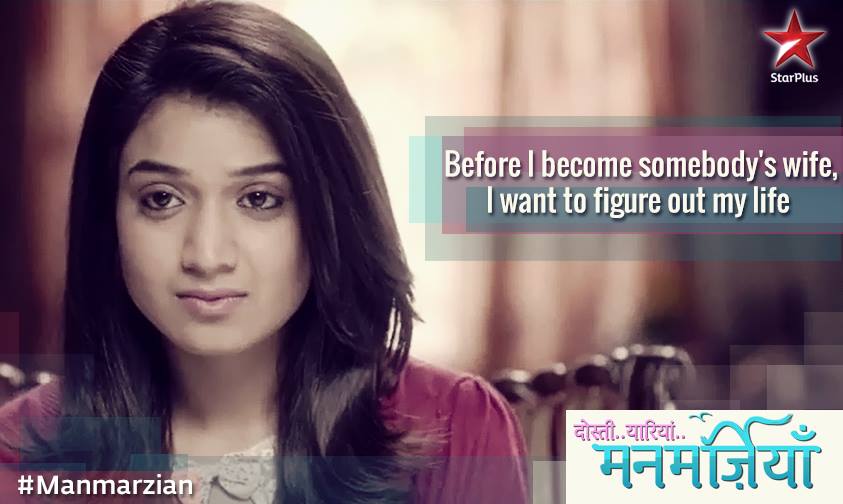 Manmarzian [Manmarziyan: Desires of heart/wishes which are somewhat different/offbeat] is the new show offering from Star Plus. It captures the essence – What are those Manmarziyan of every Indian girl before she decides to marry. The answer is not one or two but rather a large pool of answers since each girl is different, carries own perspective, and wants to do something in life before marriage due to her motivation and what her heart says. Few of such Manmarzian could be – Going on backpacking trip with friends, regarding mom as your close friend and sharing info about every crush, deciding to move to different city as work excites & inspires you, choosing your own soulmate, how to deal with love, heartbreak, hate & relationships; last but not the least, taking a decision on when to get married.

The show presents the story of two friends Radhika Mishra and Samaira. Radhika Mishra is a typical Indian girl next door and lives in Rishikesh (city on the foothills of the Himalayas), and like other girls her family too keeps a hope of wanting to get her married. They think she has reached appropriate age for marriage and starts looking for a suitable groom. But Radhika has other options and informs her family on going to Mumbai to work and to build a better future for herself. She informs her mom and family that before becoming someone’s wife she wants to do something to make her own life. Thus, she puts forward the point on marriage being not the only wish in a girl’s life, and a girl can set other priorities before getting married.

While, on one hand the show’s theme tackles an interesting and impactful question which exists in every girl and family’s mind – girl’s marriage and its timing. But on other end, it is also important to understand how you are going to complete your aspirations coming from your manmarzian. Manmarzian leads to aspirations, and fulfulling them needs many intrinsic life qualities which are constanly evolving and we continue learning from our childhood days. When we talk about marriage, it is important to discuss the mindset and thinking about girls in India. By and large, it is said that if a girl speaks few sweet words and goes to take tea with you then a guy will start believing that she loves him. His thinking can also assume she might be interested to marry. Quite contrary to that mindset is Radhika’s positioning. She told upfront on not having any plans to a boy (friend) who started assuming she might be interested in him. He feels dejected but she clarifies herself and informs him and other friends on wanting to do something in her life before becoming someone’s wife.

Manmarzian, thus tackles a subject which is primitive yet complex in nature and it can be attributed to everyone’s life since marriage, aspirations, life and time-based decisions are inter-linked. There are always trade-offs and the possibilities of what-if’s give result in different answers. Radhika’s story is to get unfolded during her stay in Mumbai alongwith Samaira and their manmarzian, aspirations will touch upon their friendship & new found relationships.

Manmarzian starts from 13th April 2015 @ 10:30 PM IST and telecasts from Mon to Sat, and replaces MasterChef India Season 4. Stay tuned for it on Star Plus.

Some Info On Cast:

* Monica Sehgal as Radhika Mishra
– Actress. Radhika is from Ujjain, Madhya Pradesh. Debut on Indian TV with Manmarzian.
– Worked in a show Jugaad published on Youtube.
– Twitter page of Monica

* Kashmira Irani as Samaira
– Actress and Theatre actor. Portrayed the titular role of Amber in Sony TV’s show Amber Dhara [September 2007 to April 2008]. The story is based on the lives of conjoined twins sisters’, Amber & Dhara. Role of Varya in Sony TV’s serial, Seven (from YRF television, 2010).
– Kashmira is returning to television after almost a gap of 7 years [If we do not consider her short stint in 2010]
– Onstage performance with the biggest bollywood musical – Zangoora The Gypsy Prince, staged at the Kingdom of Dreams in Gurgaon. Portrayed the lead role of Princess Sonali and worked alongide Hussain Kuwajerwala.
– Recently, she spoke of getting motivation from actor Hussain Kuwarjewala for making a comeback. Kashmira’s Facebook page

Promo: Many career options to choose from, but what is Radhika’s Manmarzian?
[youtube id=https://youtu.be/5Ys-S_q1Am4]

Promo: Manmarzian: Marriage is not the only wish in a girl’s life!
[youtube id=https://youtu.be/g3iJtCU3Qkw]