Rishi tells his dad that he will just marry Tanu. His dad slaps him hard and gets angry. Rishi is determined to marry Tanu. Rishi’s mum has other plans. She consoles Rishi and says his dad wants good for him. Rishi’s dad feels bad that Rishi cheated him and did not say this truth before. Rishi’s mum has played this game for this drama. Rishi understood no one is supporting his and Ranu’s love. Rishi gets broken. His mum tries to brainwash Rishi. Pavan gets marriage shagun for Tanu. She is in dilemma about fulfilling her promise to Rishi. Rishi’s family is against his relation with Tanu, and Tanu’s family is unaware of Tanu’s love for Rishi. Rishi and Tanu would elope to get married and fulfill their Kasam of love. 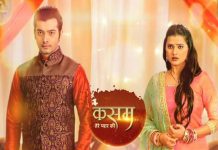