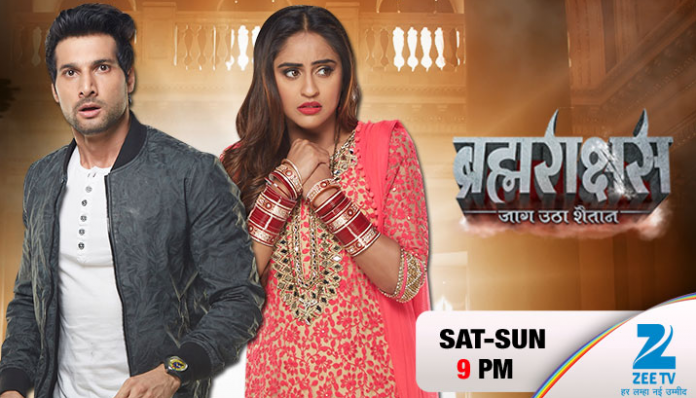 Rishabh teaches bow and arrow to Raina and romancing with her. Raina looks at him. They have argument, but they are together to fight with Brahmarakshas and take revenge for Rakhi’s death. Rishabh and Raina are falling in love with each other slowly. Raina will go to face Brahmarakshas in bridal attire. In the night, when Rishabh and Raina are leaving home to get married, Mohini gets doubtful and asks where is he going at night. Rishabh makes an excuse. Raina hides. Later, they go to cave and get married with all rituals, inviting Brahmarakshas.

Rishabh and Raina get married in the cave. Rishabh fulfills all the rituals and makes the marriage done in traditional way. As there is no baraati and pandit, Rishabh plays part of the helpers in adorning Raina. Their marriage is unique as they marry in the evil cave of Brahmarakshas to invite the devil. BrahmaRakshas appears there and laughs. Raina does not get scared. Raina and Rishabh put the net of Lotus on BrahmaRakshas and trap him. Rishabh shoots Brahmarakshas with an arrow. Brahmarakshas throws the arrow and tries to come out of the net. Will the succeed to catch the devil? Keep reading.