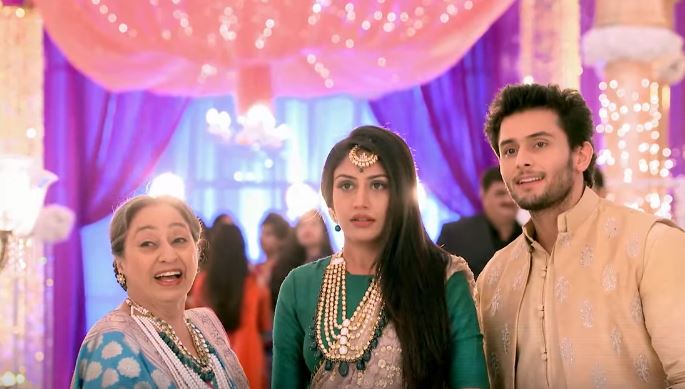 Tia is troubled by sindoor going in her eyes. Anika tries to help her out. Tia throws tantrums and does not take Anika’s help. She asks Anika to get rose water from her purse. Anika asks Tia to stop and let her check the bottles.

Tia does not listen and uses the pepper spray on her eyes. Tia then blames Anika after doing the mistake herself. Anika asks Tia what did I do, and offers help. Tia shouts on her. Thakurs leave after the meet. Dadi asks Shivay not to go office and do the rituals with Anika. Shivay tells Dadi that he can’t do this drama anymore as he is not willing to do it by heart. Rudra asks Omkara to do something, as they have accepted Tia’s mom’s challenge. Rudra suggests they have to make Shivay do the rituals. Tia’s mom asks Tia to do the ritual with Shivay. Tia feels lost and tells her mom that she has much eye pain. Tia’s mom acts mean and hurts Tia more, asking her to focus and get Shivay. Tia’s mom is sure to do something and get Tia and Shivay together.

Rudra calls Anika as Bhabhi and begins his planning to make Shivay and Anika do ritual. Shivay asks Rudra why is he calling Anika as Bhabhi. Dadi asks Rudra to call Anika as Bhabhi, and Shivay can’t stop him. Rudra makes Anika fall in Shivay’s arms. Anika faints by the rounds. Omkara and Rudra cleverly make Shivay do the rituals. They insist Shivay to feed food to Anika fast. Shivay feeds the food. Anika gets up. Rudra holds Anika’s hand and makes her feed Shivay. Dadi is glad that ritual is done by Omkara and Rudra’s help. Shivay and Anika have a fun moment. Tia’s mom comes to ignite fire between them. She blames Anika for doing wrong with Tia and putting pepper spray in Tia’s eyes.

Shivay goes to ask Tia about her eye pain. Tia complains Shivay about Anika. She tells Shivay that Anika is jealous and sprayed pepper in her eyes, to stop her from the ritual. She gets his sympathy and tells him that Anika can even kill her to separate them. She asks Shivay to let her go her home, as Anika is not bearing her presence. She says Anika is using unfair means to separate us. Shivay angrily goes to get Anika to make her apologize to Tia. Anika does not get ready to apologize. Shivay confronts her for putting pepper spray in Tia’s eyes. He does not believe Anika. He says I will trust Tia always. He is hurt by the things Daksh told him.

Anika asks him what did she do that he always taunts her and does not tell clearly. He asks her to apologize. She refuses to him. He threatens her again. She does not agree to him. Shivay throws her in the pool, when she gives him rough reply. Shivay too enters the pool and shows attitude, much like their initial meets. Shivay twists her hand and drags her to Tia to make her apologize. Anika uses the pepper spray on Tia, and then apologizes. Anika clears out that she has not done mistake before, when Shivay forced her to apologized, so she chose to commit mistake and then say sorry now. Will Shivay understand Anika was never wrong? Keep reading.