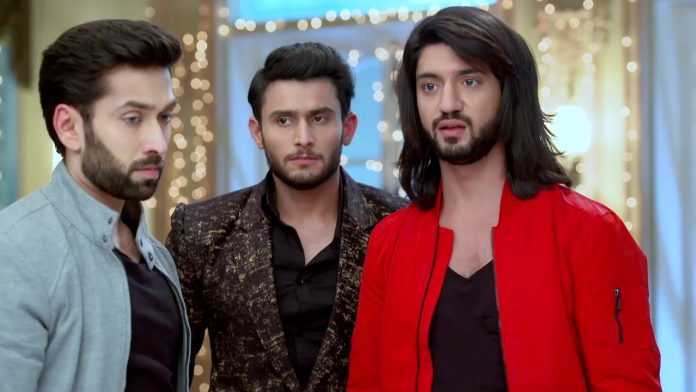 Mrs. Kapoor uses Shivay’s Daima to plant a misunderstanding in Shivay’s mind. Shivay gets news of his Daima being in city. He rushes to meet her knowing she is unwell. Mrs. Kapoor says I have gone to visit hospitals for charity and met her, Daima wanted to tell you some truth, so I called you here. Shivay asks Daima to say the truth.

Daima says I m close to death now and want to tell truth to you before I die. Shivay asks her to go ahead. Daima says I worked for Oberois for long, I got to know a big truth, that Oberoi’s son is illegitimate. Shivay asks what are you saying, and who is that son. Mrs. Kapoor says Daima told me about Tej’s elder son Omkara, he is illegitimate. Shivay asks Daima to say if its true. Daima wants to say something else, and not about Omkara. Mrs. Kapoor stops Daima from saying the truth. Shivay gets a big shock knowing this truth about Omkara.

Mrs. Kapoor says I knew its shocking to believe, so I have called you here to hear it out from Daima yourself, Tej wanted an heir for Oberoi empire, Jhanvi could not conceive at that time, and Tej had a child from his mistress, Tej and Jhanvi came home with Omkara, Jhanvi unwillingly accepted Omkara. Shivay gets a big shock knowing this.

Mrs. Kapoor remarks Shivay about this big secret. Shivay wants to know who else knows this truth. She says just we know this, Tia is not aware of this. He asks her not to let anyone know this.

She assures him the same. He thanks her. She asks him not to thank him, as they are family now, its important to keep secrets safe. She asks Shivay to hurry up to marry Tia, if you do late to become part of my family, then the secret can come out.

Shivay asks her how can she threaten him. She says you will eventually marry Tia, just hurry up the divorce process with Anika, else you know well that I have Daima’s conversation recording, sorry to force you, but I m helpless as Tia is pregnant and she has to marry you to stay happy.

She asks him to make Anika give divorce and then send her out of Oberois mansion. She asks Shivay to divorce Anika asap. Shivay gets forced by Mrs. Kapoor and also threatened about Omkara’s truth. Jhanvi asks Priyanka why is she going on trekking camp. Priyanka makes excuses and packs her bags to leave soon. Priyanka leaves from the house on Randhawa’s saying.