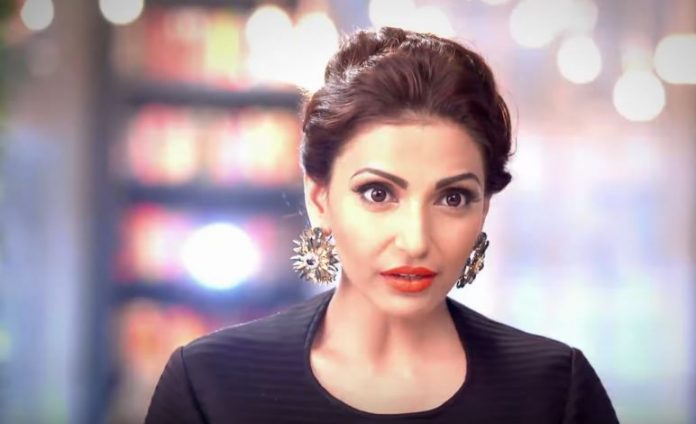 Shivay and Anika could not find any information about Shwetlana’s childhood and past. Anika says Shwetlana is very clever. Shivay says she has taken big risk, it means its big conspiracy, and target is not just me, but entire Oberoi family, she is a big threat to all of us, but I will not let anything happen to my family.

Anika supports him in this fight to protect his family. She encourages him and asks him not to worry, Omkara, Rudra and we will together make Shwetlana fail. Shivay thanks her for standing with him in such bad situation. Tia gets jealous seeing them holding hands.

Tia asks Shivay to come along with her to meet the doctor. Shivay asks why would I come. Tia says its your first baby too, you are not showing emotions towards the baby. She cries aloud to catch Pinky’s attention. Pinky asks what’s the matter. Tia tells Pinky that Shivay does not want to come with me to meet doctor for checkup. Pinky gets angry on Shivay for wasting time with Anika. She asks him to go with Tia, as its his baby. Shivay says I m busy, I will let you know when I can come.

Randhawa meets Priyanka at her college. She sends her driver. Randhawa says I have come to meet my would be wife, come. She says you are not a bad person, you saved me from the goons, why are you pretending to be bad. Randhawa clears out that he saved her as he does not want anyone to torture her, as just he has the right to torture her. He says I don’t care a bit for you. Priyanka gets upset. Randhawa says I will take you for a movie today, its a nice story of a girl whose husband tortures her. Priyanka worries.

Soumya asks Rudra to talk to Priyanka, who seems to be lost these days. Rudra asks Priyanka are you fine, Soumya thinks you are in some problem. Priyanka says I m fine, there is nothing. Rudra asks Soumya not to give him stress.

Tia tries to seek Pinky’s sympathy and tells about the accident that could have killed her baby. Pinky consoles her. Tia says I m so upset and Shivay is with Anika even now. Pinky calls him mad to not see Tia’s state. Tia does not let Pinky call Shivay. She says Shivay stays away from me since I told him about pregnancy, I m worried Anika can make him away from me forever. Pinky says I will not let wrong happen with Oberoi’s heir. Tia says it was not my mistake, I recalled now Anika was there and made me slip so that my baby gets harmed. Pinky gets angry knowing Anika attempted to harm Tia’s baby. She says if Anika did this, it will be her last day in this house. Will Tia succeed? Keep reading.