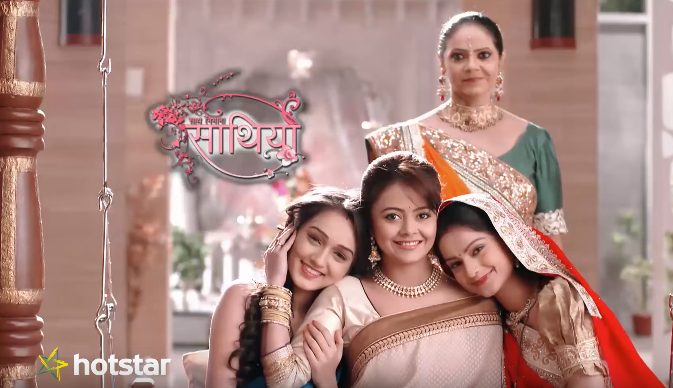 Gaura attacks Vidya. Vidya shouts on Gaura and stops her. She warns Gaura not to do any such mistake to hurt her, else she will not leave Gaura. She tells Gaura that she will not tolerate anything now. Gaura says I will end your courage in a minute. Vidya says I m enough to fight with you, my family is standing with me. Gaura threatens her about Meera. Vidya asks her to stop threatening, she can’t do anything to Meera.

Vidya is happy that Kokila came back home. She gets the news that Gopi is leaving for Singapore, Vidya tells Shravan that Kokila got bail on medical grounds, I m sure she will take her statement back and all charges will get cleared. Shravan says I knew this, Kokila can’t do anything wrong. Gaura gets shocked hearing them. Urmila informs Vidya that Gopi is going Singapore for some important work. Vidya asks Gaura to do anything now. She warns Gaura to be careful, as Gaura will be going jail now. She taunts Gaura on her pale face.

Gaura argues with her. Vidya says you will get senses when you land in jail. Vidya challenges her to help herself if she can. She says I will file such case on you that you won’t be able to come back. Gaura knows Vidya can’t do anything, she said all that in anger. Gaura does not find any risk by Vidya. She thinks how did Kokila get free from jail. Bhavani comes to meet Gaura and support her. Bhavani wants revenge against Modis. Bhavani tells Gaura that she is her enemy’s enemy, so she is like her friend. Vidya is angry as Gaura killed Ahem and Chanda, and tried to kill Urvashi. Gaura has tried to send Vidya, Meera and Kokila to jail. Gaura has done many sins. Will Kokila win or will Bhavani create new troubles for Modis? Keep reading.