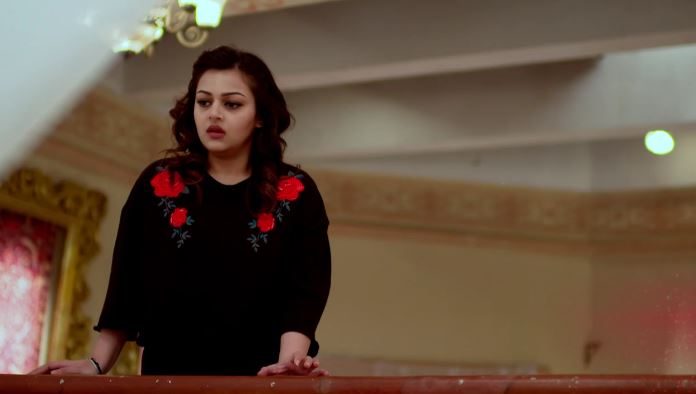 Soumya sees the jewelry inside the flower vase. Fake Shivay enjoys having the jewelry and gets the necklaces out of the vase. Soumya holds the necklace and stops him. He gets a big shock seeing Soumya. He thinks what excuse to make. She asks him why is this jewelry here, why did you not tell anyone. He lies to her and says I kept the jewelry here for some purpose. She does not understand. She says Pinky got insulted because of this jewelry. He lies that he was helpless to do this. He convinces her in his words. She says I m just leaving for temple.

He asks her not to say this to anyone, its for family reasons. She sees the lens off his eye on his cheek and gets a big shock. She realizes he is Shivay’s imposter. He wonders what happened, why her face got pale. She thinks to inform someone. He sees his lens coming off and realizes Soumya has seen his truth. He stops Soumya. She runs away to inform Anika. He catches her and scares her. He says if you say anyone, you will be gone like Shivay. Soumya pushes him and tells him that she will tell everyone.

Anika is with Dadi at temple. Anika then heads for home. She reaches and goes towards her room, while fake Shivay tries stopping Soumya. Soumya thinks its Anika in room and tells fake Shivay’s truth. She gets shocked seeing Kamini dressed as Anika. Kamini attacks Soumya and faints her. Kamini asks fake Shivay for doing mistake in the plan. She reveals that fake Shivay is her own son. They both hide Soumya before Anika steps inside the room. Shivay calls up Anika and could not talk to her as battery gets dead in nick of time.

Anika hears Shivay and thinks how did he call her from other number. She calls him back. Anika could not see Kamini and Soumya. She talks to maid and asks about Soumya. Anika goes to look for Soumya. Kamini asks Fake Shivay to manage Anika, and she will see Soumya. Anika meets Fake Shivay and asks him what’s happening at home. He gets nervous assuming she got to know his truth. Will Anika find out about the imposter? Keep reading.