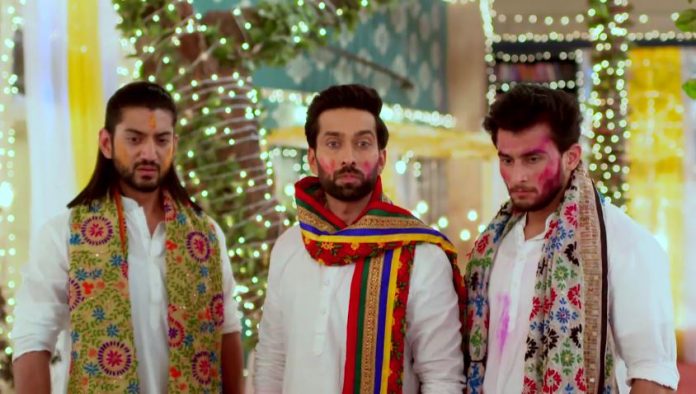 Mahi tells Shivay about his life’s troubles. He says my mother hates me and none respects me, by fate is much dark, everyone insults me. Mahi cries out his pain to be called an illegitimate. Shivay feels bad for him. Mahi gets jealous of Shivay’s fate, to have a loving family who respects Shivay a lot. Mahi gets much drunk and stops himself from falling asleep. He goes out and dances bindaas in front of everyone. Mahi falls asleep. The family does not sympathize with him, as Mahi’s mistake is too big to make Shivay from the family and stay as Shivay. Everyone start hating Shivay. Omkara can’t bear his sight. Pinky understands that Mahi has hurt his sentiments till now. Shivay makes an entry. The brothers hug and bring the united charm back.

Rudra cries by getting the right feeling by hugging Shivay. He tells Shivay that he has missed him a lot. Rudra regrets to know Shivay got swapped. Omkara apologizes to Shivay for not being there in the hour of need. Shivay hugs his brothers. The family gets happy to have their caring, protective and loving Shivay back.

Pinky gets emotional seeing him. She understands that Anika has found real Shivay and also exposed the imposter. Pinky realizes her mistakes to insult and misunderstand Anika always. She apologizes to Anika. She thanks Anika for her big favor to save Shivay. She accepts Anika as her daughter in law. The Saas-bahu unite.

Shivay asks Omkara and Rudra to find out Mahi’s real plans. He wants to know everything about Mahi. He says it will be a game between Oberois and Mahi, we will trap him. He asks everyone to be united.

Mahi wakes up the next day. Anika gets angry seeing the imposter. He recalls how much drunk he was. He fears that he spoiled his plan. Anika fools him in her words. She asks him why did he not enjoy in Holi party. She confirms that he does not remember anything. Tej reminds him about the meeting. Mahi gets worried finding it tough to be in Shivay’s role. Mahi does not understand anything. Mahi thinks to leave from home. Shivay asks Pinky and Anika to continue the drama, as they are his strengths. He determines to find out why Mahi came as Shivay and who are his targets.