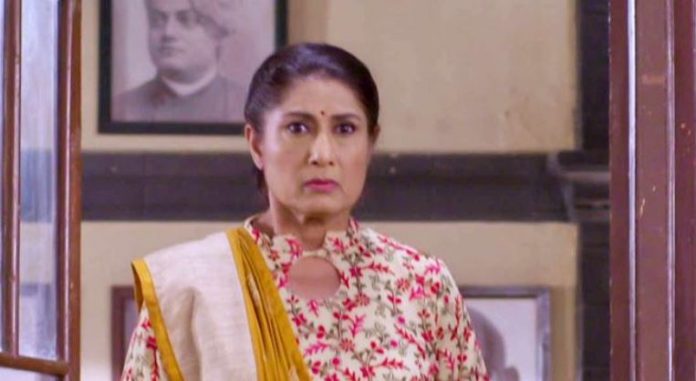 Avni holds Neil’s hand, after getting disturbed in sleep. Avni wakes up in the morning, and sees Neil sleeping by the bedside, while holding her hand. Avni falls for Neil seeing his sweetness. Avni does not get scared of Dayavanti anymore. Avni’s revenge is getting fulfilled. She is seeing Dayavanti in the state she wanted. Dayavanti failed to tell Avni’s truth to Neil’s family. Dayavanti was thinking Avni’s truth will make Neil abandon her, but nothing such happens. Dayavanti gets a shock knowing Neil already knew about Avni’s true identity. Meanwhile, Bebe suffers from an allergy. She reprimands Shweta for being so careless towards her diet. Bebe gets rashes on her face.

Prakash tells Bebe that she will get fine in some time. Bebe says this happened because of your wife, she did not intentionally, she tried to kill me, I will send her to jail for attempt to murder. She asks Shweta did she give away her mind to someone. Shweta apologizes to her for adding peanuts in the dish. Bebe tells Prakash and Neil that Shweta does not remember anything about her. Avni asks Bebe to have the lemon tea, which is a perfect anti-allergic. Avni takes the blame on her, and says she has made the food. Avni tries to save Shweta.

Bebe does not believe Avni. Neil takes Shweta’s side and asks Bebe to scold Avni, than Shweta. He says mom gets scolded by Ananya always. Neil teases Avni and they have a cute scene. Bebe asks Neil to stop it now. Neil tries to maintain a good bonding between Avni and Shweta. He commands over Avni in front of everyone. Neil asks Avni to go and get a black coffee for him. Avni thinks to teach him a lesson and acts as good wife in front of everyone.