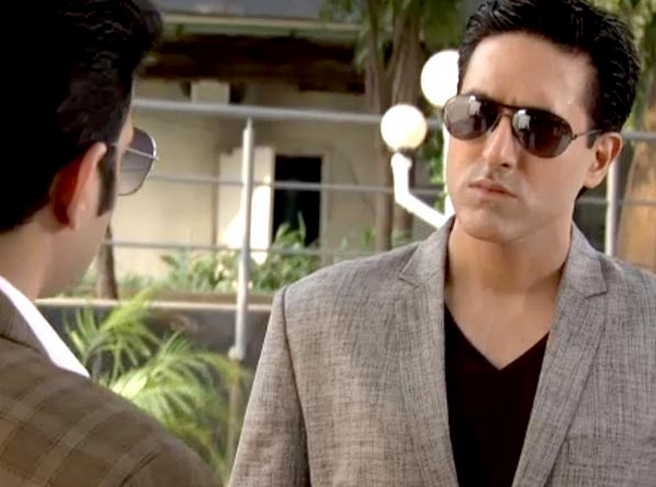 Raman supports Adi. He asks Adi to apologize to Aaliya and her parents. Adi gets scared to face Aaliya. Raman asks Adi not to make same mistake again. Mani stops them from meeting Aaliya. Mani asks Adi why did he slap Aaliya. Mani vents out anger on Adi and Raman. Mani asks Adi how did he forget the marriage vows. He slaps Adi to teach him a lesson. Aaliya asks Shagun why did she tell Mani about Adi’s misbehavior. Shagun wants Mani to know how Adi is badly handling Aaliya. Aaliya does not want the matter to get worse. Adi tells Mani about Aaliya and Nikhil’s relation. Raman asks them not to fight in front of everyone. Adi tells Mani and Raman about Aaliya’s over friendship with Nikhil. Mani asks Adi not to blame Aaliya. Mani beats up Adi. Raman tries to stop them. Mani beats up Raman too. Raman asks Mani not to beat his son. Raman takes Adi’s side. The neighbors comment on Bhallas making issues on road always.

Meanwhile, Bala meets Kiran. He tells Kiran that he is not interested in her. Kiran still has hope. Bala says you won’t be able to manage my children. Kiran gets hurt by his remark. He explains her the need of getting a mother for his children, not a wife for himself. He asks her not to try to take Vandu’s place. Kiran takes the challenge. She asks him to give his children’s responsibility to her. Bala tells Ishita about Kiran trying to prove herself suitable for making a relation with him.

Mani gets angry over Bhallas. Raman tells Ishita how Mani insulted Adi and him. Raman wants to end relations with Mani. Ishita asks him not to overreact, Mani’s doings is justified. She asks Raman to keep himself in Mani’s place and think. Mani plans to ruin Raman in business. Shagun limits Raman from meeting Aaliya. Raman tries to contact Mani and apologizes to him. Mani’s anger gets cooled down. Raman hopes Mani can make things fine. Shockingly, Mani gets murdered by someone. Raman goes to meet Mani and gets a huge shock seeing Mani lying dead. Raman will be framed in Mani’s murder case.