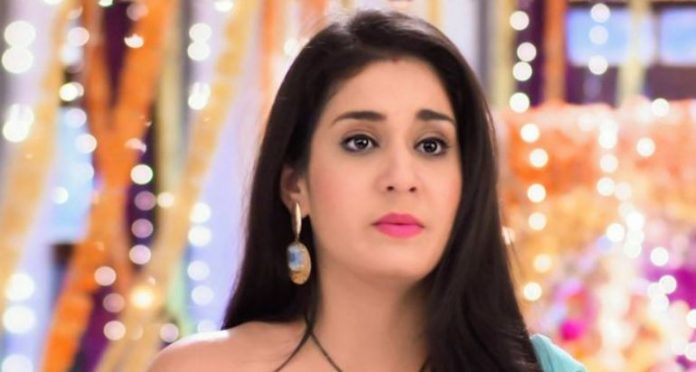 Avni has taken a disguise and reaches Gurumaa’s Rang mahal. There are many dangers lined for her. She is spying to know about Ali. She sees Gurumaa there. She gets to see the girls dancing in the Rang mahal. Avni sees Juhi dancing and sees her pain in her eyes. Juhi performs thinking of Neil. Gurumaa enjoys Juhi’s dance. Gurumaa tells Juhi that she is selling her. Juhi begs Gurumaa not to do this, she will never try to cheat her. Gurumaa sees Avni there, but doesn’t identify her. The goons catch her and get her to answer Gurumaa. Gurumaa questions her. Avni tells her that she has come to take her help, she wants some soil to make an idol.

Gurumaa taunts that good family women come to her Rangmahal to get the soil for making idols. She permits Avni to take the soil. Avni fools Gurumaa by her excuse. Gurumaa asks Juhi to take Avni out and help her. Avni meets Juhi and gives her an idol. Gurumaa asks Avni to take the soil and leave soon. Avni doesn’t get time to talk to Juhi. She has come prepared with a plan. She understands what’s happening with Juhi, who is caged in Rangmahal by Gurumaa. Avni gets keen to find Ali. Gurumaa asks Avni to leave soon, decent people don’t come here. Avni tells her that none would like to come here by their own wish and signs to Juhi. She says maybe Juhi is also brought here and she would be helpless to stay. Avni asks Juhi how did she reach here. Juhi senses its Avni and worries. Avni wants to solve the mystery. Gurumaa sends her out. Avni looks for any help to search for Ali.