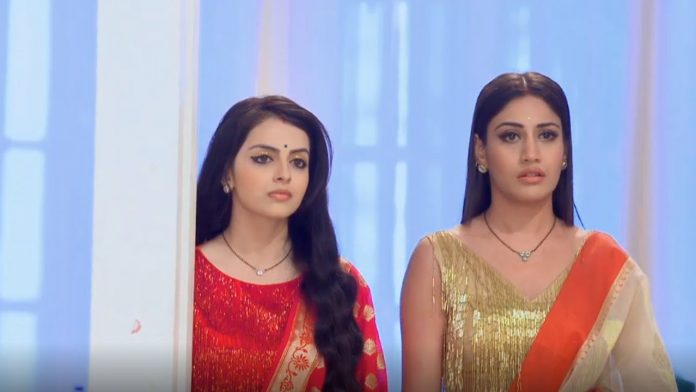 Rudra gets mistaken that Bhavya is getting married to someone. He apologizes to the bride and asks her to give him a chance. He learns Bhavya is not the bride. Rudra’s confusion gets cleared. He goes to find Bhavya. He finds Bhavya. She tells him that she is going away from him forever. Rudra asks her to give him a chance to prove he is not so immature. Rudra boards the train with Bhavya. They revive their relationship by a fresh start.

Anika asks Gauri not to feel bad if she is not exactly the same like Omkara, as life partners need not be same. She asks her to make her own different identity patiently. Shivay tries guiding Omkara in his relationship. He asks her about his terms with Gauri. Omkara tells him that its all fine. Shivay is hopeful that Gauri will soon impress Omkara. Shivay and Omkara go for ring shopping. Shivay doesn’t like any ring for Anika.

Anika and Gauri go to attend Suman’s attend, and learn that Suman is not happy with her marriage happening with an elderly man. Suman tries to commit suicide. Anika and Gauri stop her from such a drastic step. They save Suman’s life. They get a task to stop Suman’s marriage. Suman tells Anika and Gauri that her marriage is just a deal. Anika promises to save her from the old man. Gauri asks Kaka not to make marriage a deal. Anika too tries to fill some sense. Anika tells Gauri that they have to make Suman run away. Shwetlana and Pinky join hands. Pinky hands over the painting which Shwetlana wanted desperately. Shwetlana doesn’t share her secret with Pinky.