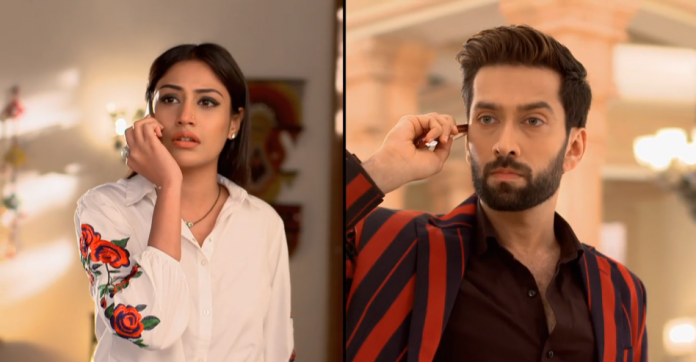 Anika tries to remind Shivay about herself and annoys him by her talk. She tells the old incidents. She does so to make him speak he is doing a drama. He tries to defend and doesn’t tell anything. He asks her not to spoil his name. Anika and Dadi laugh on him. Anika’s cute banter continues. Anika annoys him further. She sells her costly ring to make a cheaper dinner set. Shivay stops her and tells her that ring is not fake, its very costly. She tries to make him admit that he has given her the ring. Shivay tells her that he knows the value of a diamond. He goes with Tania. Omkara asks Shivay if he is hiding something. Shivay doesn’t confide anything.

Shivay asks him if Gauri’s matter is troubling him. Omkara asks him how did he forget Anika then. Tania keeps an eye on him, which fails Shivay from saying anything. Shivay doesn’t want to hurt Anika but he is helpless to obey Tania. Jhanvi gets the video tape which she recorded many years ago. She finds it related to Kalyani Mills. She gets threatened by someone, who asks her to meet at the mills. Abhay manages Omkara’s problem. He delivers the painting. He asks the men to free Omkara from the contract. Abhay has immense love and concern for Oberoi brothers. He makes a deal by risking much. Abhay protects Omkara. Omkara gets informed that he is free from all the legal hassles. He doesn’t learn that Abhay has done this. Abhay then meets Omkara.

Tej and Shakti are also called at the mills. They see their wives there, and get into an argument. All of them get divided and doubt on each other. Gauri learns English and thinks to surprise Omkara. She plans her return home. She thinks of confessing love to Omkara. Omkara doesn’t have interest in knowing about Gauri. Bhavya resumes her duty and serves the people. She gets trapped in the bribe case. Gauri reaches home. Arjun asks Gauri to confess her love to Omkara. She rehearses her confession, which Omkara gets to hear. Omkara’s misunderstandings get higher. ?His heart turns bitter. Arjun wishes her all the best. Omkara angrily acts to love her and welcomes her back. Gauri gets happy that Omkara missed her. Omkara then confronts her about Arjun. He doesn’t see her surprise. He doesn’t let her explain and decides to end their relation. Anika puts herself in risk to make Shivay admit that she is his Anika. Shivay melts down and shares his drama secret with her.