Shivay gets blackmailed by Tania. Tania tells him that she is following someone’s orders and she is not allowed to reveal him anything. Shivay wonders for whom is Tania working. He doesn’t get his answers. He is happy to be back home, as his family is his strength. Anika learns Shivay is doing the partial memory loss drama. She hears Shivay and Omkara’s conversation. Shivay fears to tell anything to Omkara, when he sees Tania spying.

Shivay and Anika get a video of the fire incident in Kalyani Mills. He believes his family is behind this and someone from his family is using Tania to fulfill some motive. Shivay shares the matter with Anika. He tells her that he is acting to not identify her because of this matter. He has to save his family respect. Tania is keeping an eye on him. Shivay realizes Tania is around. He secretly talks to Anika. Anika gets happy knowing Shivay is doing a drama. They have a romantic moment.

Anika meets Dadi to know what happened in Kalyani Mills. Anika winks to Shivay. They talk via signs. She passes the message to Shivay. Shivay hears Anika and Dadi’s conversation. Anika tries to find the matter. She speaks against Shivay and makes Dadi tangled in her words. Dadi asks Anika not to feel bad of Shivay’s words, maybe he is helpless to do this. Anika doesn’t get any info from Dadi. Her plan fails. Shivay has told everything to Anika about his blackmailer. 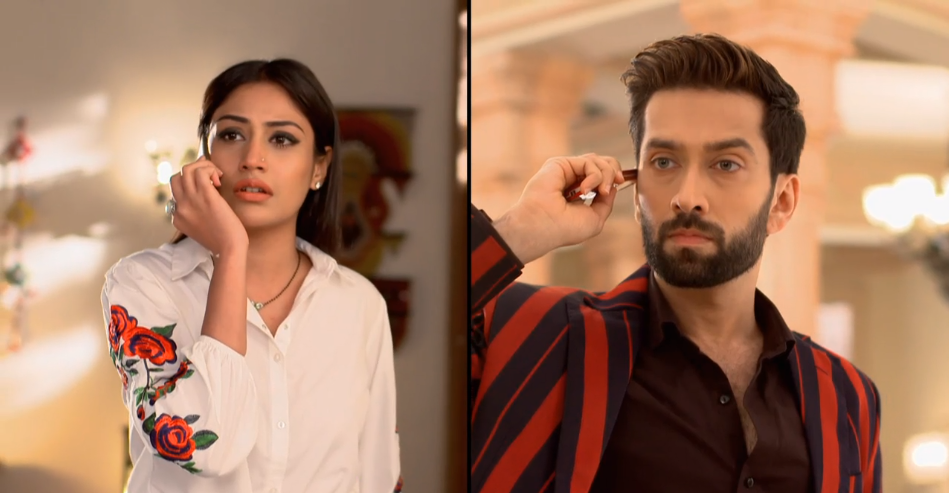 Anika sees the video and thinks if there is any hidden clue. Shivay tells her that someone is hiding their family’s big secret. Anika asks him not to worry, they will investigate the matter. Shivay tries to know the matter from Tej and Shakti. He feels they are also involved in the fire incident. Pinky gets tensed on hearing the old incident from Shivay. Pinky gets a warning note from some mysterious person. She is called at Kalyani Mills. Pinky gets threatened. Oberois are hiding a big secret from Shivay. On the other hand, Omkara doubts on Gauri for having an affair with Arjun. Omkara and Gauri meet after long time. Omkara confronts Gauri about Arjun. Gauri cries out hearing his blames and defends her innocence.