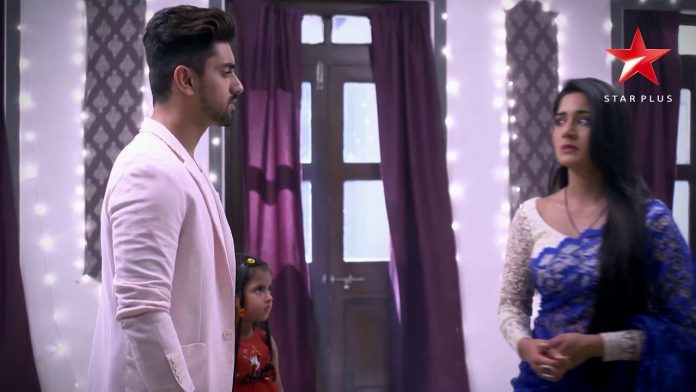 Vidyut scares Mishti. He tells her that he will take her away from Avni. Avni comes to check on Mishti. Vidyut manages to escape. Everyone worries for Mishti, seeing her scared. Avni asks her the reason. Mishti reveals Vidyut has come here. Avni worries if Juhi is in any problem, because of Vidyut. They inform Neil about Vidyut. Neil and Avni get worried knowing Vidyut has dared to come home and scare Mishti. Avni tries to stay strong. Neil promises Mishti that he will protect her. Avni comforts Mishti. Juhi comes home with the doll for Mishti. Neil gets angry on her. He tells her what all happened at home in her absence.

Juhi gets a shock knowing Vidyut has come home and scared Mishti. Juhi tells him that she has just gone to get a doll for her. Bebe asks Neil to understand Juhi’s sentiments. Neil thinks it was better that Juhi was not at home, else Vidyut would have seen her. Neil makes a plan to catch Vidyut and his mum together. Juhi gifts the doll to Mishti and gives her happiness. Juhi worries that Vidyut can tell Neil the truth that Mishti is his daughter. She tries to hide her truth from everyone. Avni finds Juhi sad. She tries to comfort her.

Neil assures Avni that he will talk to Juhi and apologize. Bebe learns Neil was planning a surprise for Avni, which Juhi ruined. Neela asks her not to blame Juhi, as their real problem is Vidyut. Shweta also believes that Juhi is coming closer to Neil.

Juhi tells Neil that she has lost herself when she got trapped in Rangmahal. She feels shattered. Neil feels he has lost the old Juhi forever. He apologizes to her. She tells him that Mishti’s behavior hurts her. He tells her that she has got her normal life back, she will get Mishti’s love too. He asks her to stay positive and see the good changes in her life. The family supports Juhi in her life’s new journey. Juhi gets insecure because of Avni. Avni doesn’t want Juhi’s sentiments to get hurt because of her. Neil tries to cheer her up.