Meri Durga: Sanjay has blackmailed Yashpal to tell the truth to Durga. He was not willing to tell Durga, but used Yashpal’s emotions in his favor. However, Yashpal breaks the truth to Durga that she is not their biological daughter. Durga finds it hard to believe the truth. Yashpal wants her to go ahead for the race. Sanjay tries to weaken Durga. He asks her to know about her real parents. He hits on her emotions. Durga doesn’t see the details about her real parents she goes for the race in an emotionally broken down state.

Dadi questions Naira about the abortion. Anubhav tells Dadi that he just got to know about this, he feels Kartik’s life got ruined. Dadi vents out her anger on Dadi. Sakshi gets scared and tells everyone that Naira really had an abortion. Sakshi lies to save herself, which shocks Naira. Naira tells Dadi that this is not true. Dadi feels Naira is cursed, and she has ruined Kartik’s life. She feels Naira has stained the entire family. She takes a decision for Kartik’s life. She shows the door to Naira.

Ahana gets glad with the pregnancy news. She shares the news with Saloni. She gets hopeful that Anant will forgive her when she breaks the news to him. Anant misses Ahana. He lies to the family that he was thinking about Rehaan. The family helps out Anant. Rehaan promises to marry Vyoma. Laila gets revenge from Gupta by defaming her. She gets glad seeing the news. She feels she has taught a good lesson to Gupta. Gupta gets furious seeing the news. He lies to his wife about his affair. Rehaan and Ahana come to meet Anant. Rehaan tries to avoid her.

Mrs. Iyer creates a scene finding Raman and Ishita handcuffed. She asks Raman how will Ishita stay with him, its about Ishita’s respect now. She tells him that Ishita can’t stay with him. She gets over dramatic. Ishita wants her mum to tone down a bit. Adi asks them to sort the matter, else they can sleep in the living room. Simmi asks Adi to arrange a key maker. Adi tells them that its matter of one day, he can’t manage any key maker at night. Parmeet assures that he will find the key maker. Ishita gets glad to get opportunity to stay with Raman. Iyers get glad with whatever happened.

Shivay introduces his brothers Omkara and Rudra to Dr. Veer. Veer appreciates their bonding. He tells them that such love between brothers is very rare to see these days. Shivay, Anika, Omkara and Gauri have a fun time. Rudra enjoys the most. Omkara gets hurt. Gauri calls Shivay and Anika for help. Monali takes Omkara and Gauri with her. She does the aid to Omkara. Anika gets left alone. Veer takes the clown’s disguise and abducts Anika. Anika shouts out to Shivay for help. Shivay spots Anika in danger and runs to save her. Veer tells Anika that its not over, she will be of him very soon. Veer drops Anika back and leaves, while Shivay reaches her. Anika tells Shivay that the same man was troubling her before. She gets terrified.

Neil and DD find out that someone is in disguise as Santa. Neil understands that Vidyut has come inside the jail in disguise. He doesn’t tell anyone that he has a doubt on Vidyut. Avni recalls Neil and sheds tears. Avni feels like hating herself for falling weak in front of Neil. Neil searches for Avni everywhere. Avni finds a secret passage in Neil’s cabin. She enters the passage. Neil doesn’t find Avni. He wants her to come back. Avni thinks the passage can help her escape from the jail. Avni gets a shock on finding Vidyut with Monica there.

Anami tricks Satrupa into knowing the truth. Sudha and Satrupa fear that Anami will know their truth. Sudha feels she has lost her anklet which could have fallen near the circuit board. She tries to find her anklet. She comes across Baldev. She tells him that she loves the family a lot, she wants him to be happy. He asks her to become part of the puja. She gets glad. Adhiraj gets Sudha’s anklet. He confronts Narottam about the same. Everyone attends the puja. Anami prays for Lakshya’s safety. Anami gets taunting Satrupa, who has back stabbed her. 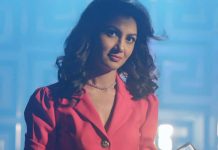