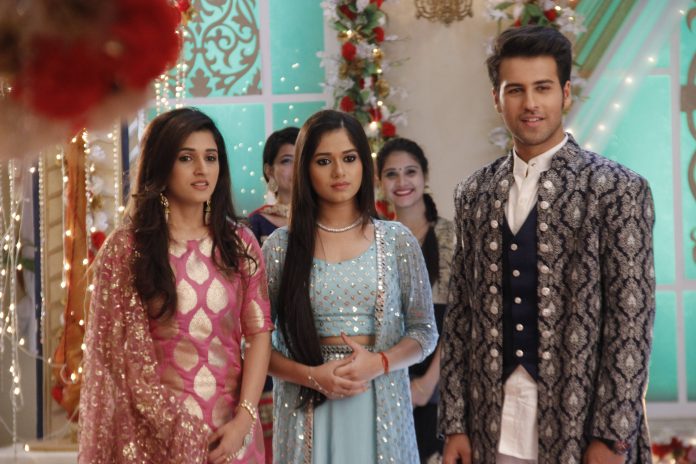 Aparna and Sheetal had tied up Anita to stop her from ruining Pankti’s happiness. Even then, Anita comes in the function. Anita gets a big twist in Ahaan and Pankti’s engagement. She exposes Pankti’s truth. She tells everyone that Pankti isn’t a normal girl, she can’t get married in a respectable family, she is just someone’s mistress. Ahaan asks Anita to stop it. Anita tells them that she is Pankti’s mom, she has sold her to someone, she treats Pankti as a money machine. Anita asks Dhanrajgir family how will they accept Pankti as bahu. She gets mad to break the engagement.

Pankti didn’t expect her mum to become her enemy. Anita ruins Pankti’s respect. She gets more insulting. The guests take a leave. Ahaan tells Anita that he had some bit of respect for her, but she has crossed all limits today by insulting her daughter. Anita tells him that Pankti has sold her respect.

Ahaan scolds her. He tells her that she can’t insult Pankti now, Pankti is his would be wife now. Anita tells Ahaan that he has also insulted her many times, so she has chosen this day to settle scores. Ahaan doesn’t want to forgive Anita for this. Pankti sheds tears. Ahaan asks Anita to leave from his house. Ahaan’s family didn’t know Pankti’s truth. JD doesn’t show any involvement in Anita’s deed. He acts defensive. Ahaan apologizes to Pankti for failing to protect her from their bad wishers. Aparna supports Pankti, as she already knew the entire truth.

Pankti was worried that something will happen and spoil her happiness, as her fate doesn’t have everything written well. Ahaan comforts her fears. After the drama plotted by Anita, Ahaan doesn’t want Pankti to leave from his house. Anita tells Ahaan that Pankti is her property and she will take him. Ahaan gets in between. He tells Anita that she has no right on Pankti now. Ahaan gets engaged with Pankti.