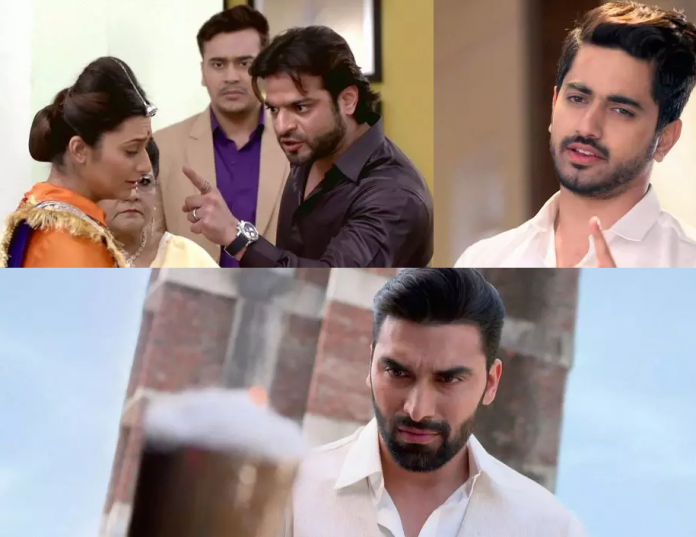 YHM: Simmi and Mihika instigate Raman against Ishita to the extent that he thinks of remarriage. Simmi asks him to get remarried for Pihu’s sake. She tells him that Pihu will get a mum and stop going to Ishita. She asks him to show Ishita that they don’t need her in their family. Raman gets provoked and gives his approval for remarriage. He agrees to Simmi’s suggestion. Mihika tells Simmi that if they succeed to take Raman’s signatures on divorce papers, they can make Ishita sign too. Simmi tries to break the news to Pihu. She is glad that Ishita will be out of Raman’s life. She wants Pihu to inform Ishita about Raman’s decision.

Satrupa asks Anami to decide everything on her own. She withdraws her case against Adhiraj. She asks Anami to get her arrested if she wants. Anami decides to get Satrupa arrested to settle scores. Lakshya takes a stand for Satrupa. He defends Satrupa, who took good care of him when she kept him away from the family. He tells everyone that he didn’t miss the family as Satrupa visited him every day and fulfilled all his wishes. He doesn’t let anyone take a step against Satrupa. The family decides to forgive Satrupa, when Lakshya proves her innocent. Anami doesn’t take any action against Satrupa.

Ahana informs Laila about Saloni and Tarun’s baby. Laila gets glad. Laila hides the letter, but Roshni gets to see it. Yamini prepares Anant’s favorite dish to care for him. She tells Roshni that Anant has given her the precious gift, which gave her much happiness. Rehaan and Ahana leave for home. They spend some good time on the way home. Rehaan’s cuteness makes her smile. Their bond grows stronger. Ahana sits under the sky and gets philosophical. They want to celebrate their happiness with the sky. Rehaan and Ahana recall the moment that changed their relation into a beautiful one. Ahana thanks him for giving her a reason to live and laugh. She gives him the credit for giving her new hopes.

Durga wants to stop Sanjay from knowing Jassi’s past. She reaches the academy in disguise. She finds Sanjay already there. Sanjay searches for the file holding Jassi’s truth. She tries to get the same file before Sanjay. Durga hides her identity from Sanjay. Durga gets Jassi’s file. She removes the documents holding Jassi’s dark truth. Sanjay gets the file but fails to know the reason behind the ban on Jassi’s career. Sanjay learns the half truth. Durga tells Gayatri that she has changed the real documents.

Neil compliments Avni and impresses her. He passes the test and earns marks. Bebe falls in the kitchen. Avni helps out Bebe and falls too. Bebe asks her to go and clean her spoiled clothes. Neil blocks Avni’s way and romances her. They reminisce their old moments, while creating new memories. Neil’s love makes her cry with happiness. He tells her that he doesn’t want to see tears in her eyes. They have an emotional moment. Shweta asks Neil to stay away from Avni, till he wins the tasks and proves his heart. Bebe asks Shweta to relieve Neil from the tasks and let the lovers be together.

Shivay gets broken down seeing the construction site burning. He doesn’t understand who is playing the dirty game with him. He feels he is losing out everything. He is unknown to his new enemy. He doesn’t think its someone’s conspiracy. Anika calls him. He hides the matter. Anika and Rudra tell Shivay about their plans for organizing functions. Shivay promises to do everything as Rudra wants. He gets devastated with the thought of bad happenings lined for him. Shivay holds on his emotions. He talks to Shakti and gets encouraged by his speech. Shakti shows his belief in Shivay. He tells Shivay that everything will get fine with time and his son is capable to set everything right. Shivay shares his pain.

Naira stands in front of the bulldozer to stop the officials from demolishing her academy. Kirti performs to carry the function ahead. Naira gets tensed, but stays firm on her decision. The officials try to scare her, so that she runs away. Kartik looks for Naira. Kirti tells Naksh that Nira has gone for some important work and asked her to perform on stage. Naitik compliments her for the dance. She asks Naitik and Naksh to find Naira. Goenkas wonder how did Naira disappear. Kartik misses to see Naira, when she deals with the officials alone. She doesn’t want Akshara’s dream to shatter.