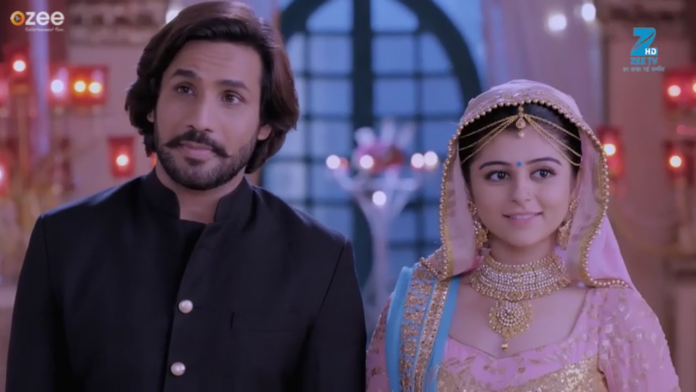 Devi is upset with Virat, that he has drunk wine with Adhiraj. Virat apologizes to her. He tells her that he will not have wine again. He does sit ups to convince her. Devi and Virat have their friendly moments. Adhiraj sees their bonding. He gets doubtful. He finds Devi happily laughing. He asks Devi the reason. Devi fails to tell him anything. Devi makes pasta for Virat. Maasa asks Devi to call Virat for dining with them. Devi looks for Virat. She doesn’t see him. Adhiraj sees the pasta and wonders if Devi is making special things for her friend. He gets angry that Devi didn’t cook anything special for him.

Maasa instigates him further. Maasa sees Devi and Virat playing flour holi in the kitchen. Devi cooks pulao for Adhiraj to make his mood better. Maasa gets a chance and spreads the oil on the floor. Devi and Virat slip and fall down. Maasa calls Adhiraj there. Adhiraj sees Devi and Virat close and warns Virat against getting close to Devi. He doubts on Virat’s intentions. Virat clears that he just wishes good for Devi, he is not coming between them. Maasa portrays Virat and Devi’s friendship in a wrong way.