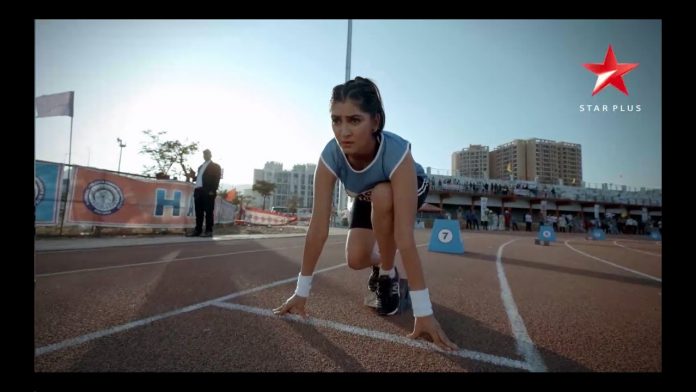 Durga risks her life and runs to win the race. Yashpal learns about the evil planning of Aarti’s dad. He runs to stop Durga from winning the race. He doesn’t want her to win at the cost of her life. He gets mad to rush to her. He worries for his daughter’s life. Aarti’s dad threatens him further and reveals the needle secret. Durga leaves behind all the fears and runs ahead to win the race. She creates a new record. She gets injected by the poisonous needle. Yashpal worries for her and tells the family that Durga’s life is in danger.

The medical team is called to treat Durga, who faints on the race track. Durga then gets conscious and realizes she got saved by Dadi’s gifted protective shield. Durga thanks Lord for saving her life. The family feels proud of Durga, who has won by her hard work, sincerity and determination. Durga feels she has won the race as she has run for the sake of her family’s happiness. She gives all the credit to her family.

Durga receives the trophy and earns big name for her family and village. Aarti gets a big defeat when she comes on fourth position. Durga’s family applauds for her. Durga gives an inspiring speech and boosts everyone’s confident and courage. She thanks her in-laws for supporting her. She tells everyone about her dad, who left all his dreams to fulfill her dreams. She thanks Yashpal for showing belief in her and educating her. She makes Yashpal wear her medal. She wants everyone to give chance to a girl child. She honors Yashpal. Yashpal requests them to have a medical test for Durga once again, as she wants every doubt to get clear. He doesn’t want Durga’s name to get stained again. He reveals Durga’s innocence in the past and defends her honor. Sanjay and his parents regret for their mistake.